If you haven’t listened to Chance The Rapper’s latest mixtape, Coloring Book, you’re really missing out. It's fantastic and exploratory and yada yada yada. Real talk for a minute fam: As good as the tape is, and as deserving of all the hype thrown its way as it really is, the best thing to come from it just may be this cover of “Same Drugs” by New York quintet MisterWives.

Ok that’s hyperbole, but the indie pop cover has everyone raving, including the man who wrote the original. 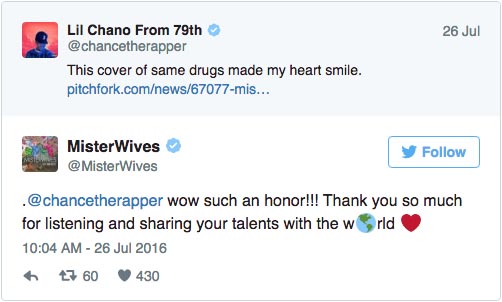 This is a straight missionary-position cover, but with a song as good as this, that’s all you need. Lead singer Mandy Lee goes all out on her vocals, and you can feel the entire band's admiration for Chance bleeding through in their take on his track. This certainly won’t be the last cover of “Same Drugs,” but it’ll probably be the best.

And here’s the original for comparison's sake, and because I always want to hear this song.

MisterWives meanwhile have their debut LP, Our Own House, out and have a few more festivals dates in support of it. Both are worth checking out.