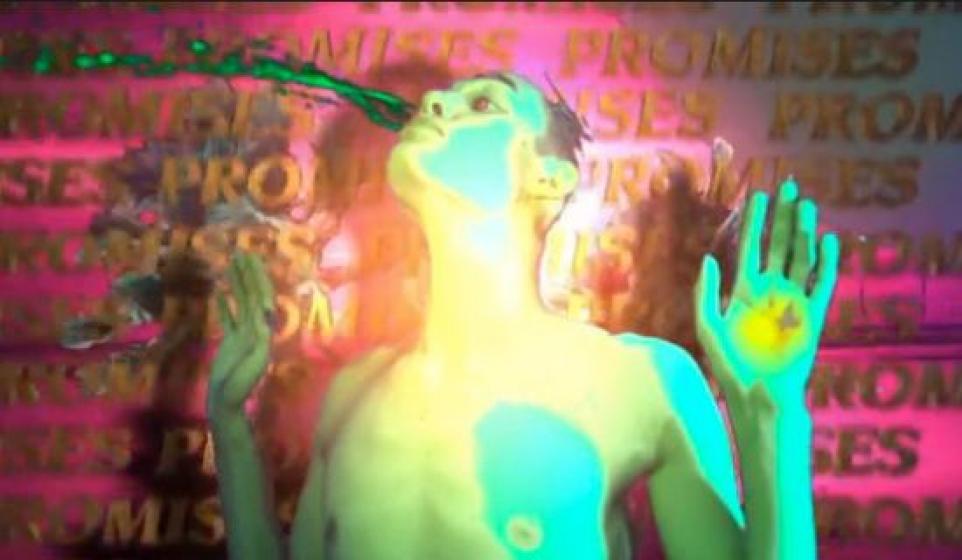 At this rate, we're about to destroy ourselves before the Mayans' end-of-the-world prophecies come true on December 21. Thank fully we have our best new videos.  But seriously, how we're ever to curb senseless violence is a problem we'll most likely never solve. Or as The Onion recently put it - "Just fuck it all to hell." A weekly YouTube wormhole is very trivial right now, as the victims of Newtown, Connecticut's school shooting push on, and our nation heals. But it's also a reminder of how deeply fucked the human spirit is, capable of destroying itself and others, while able to create life affirming art just the same:

We're thinking you put this together yourself, Chicago bedroom-pop enigma J Fernandez? It's quite entertaining, sir, to see the dreams of 70s gameshow hearts meander on into your sly sax and drum machine ether. Where are these contestants now? What is their conception of luck? Do you have a secret game show fetish?

The final chapter in the visual trilogy directors Fleur & Manu put together for Hurry Up, We're Dreaming catches more montages of these creepy alien children getting their creep on further, this time with a crew of white wolves and suspicious Pink Floyd prisms from above, dropping kids without space suits into Earth's atmosphere. You do see how the Mayan's predicted this, right?

"I mean, we got TV. We know it's possible to be lawyers, doctors, artist, musicians, whatever. But just because we know it's possible doesn't mean it's real." Just some of the hip-hop wisdom Big Sean has to give to the world. Oh wait, this one's even better, right at the end of walking silently through a backstage arena hallway with Kanye West, and after brainwashing viewers with 3:30 of new shoe dreams: "I can make any situation my reality." We here all he ever does is big, though. So touché, Big Sean, we'd vote for you.

Dudes, those doomsday suits aren't gonna do y'all any good if you keep taking them off. Also, clearly, Amber Coffman plays a fiercer misty mountain thrash than all of you. Is that why this song title is a coy spin on shooting blanks? Sweet regular suit, though, David Longstreth.

Fuck you, dude eating Cheetos. Have some respect for the dead. Er, injured. Though maybe if this throwback NYC police officer did his damn job in keeping people out of the damn way, we would have found out earlier that blood-looking juice was just that. Of course, that's just more questions and less epic Frightened Rabbit jam. Plus that news anchor that was able to squeeze her way in there is sexy. So, carry on.

Oh shit, hello 1989. New Zealand directorial duo, Special Problems, crafted a surreal utopia for the dance-floor set here, where The Presets' "Promises" glow with neon pride, lots of random people shake their asses and the Berlin Wall perpetually comes down. 47 random images of people falling in flower beds, playing with their cheeks, hiding under blankets and blowdrying their hair with a small fan later, we are confused. But dancing, still dancing.

Some of the art may be absurd, of course. But Big Sean had his heart in the right place. And if some evil asshole would've cut his life short in the third-grade, we would have never had a peak into his rags to riches tale. And that ain't no joke. Freedom is priceless. Until next week, 'murrica. Keep your heads up.