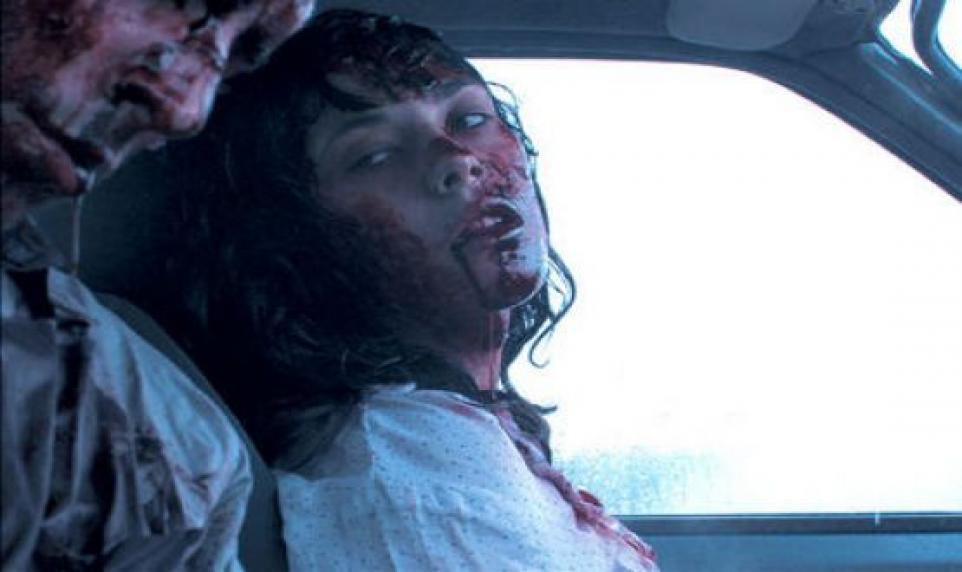 Inside (French, 2007). What She Wants Is Inside You "Got Gore?" (and we're not talking Al Gore) would have been an apt tag line for this French horror-thriller film, "Inside." Because it's really, you guessed it...gory...and is one of the only movies I would highly recommend as one of the most well made horror suspense films...but in the same breath, I'd recommend it's a movie that you never see.

When movie critics said that "Inside' was one of the bloodiest things ever produced, they weren't kidding. This horror movie is hard to watch yet a must see, no matter how ironic it may sound. But (and this is important) it's not so much the gore / blood but the actual psychologically disturbing premise and tension that is non stop through the film that is the most over the top.

"Inside" along with "Martyrs," also reviewed on our site, represent two masterpieces of horror I would truly hesitate to recommend anyone...if that makes sense. But if you are prepared for a shock to the system, you might get by, just fine. But isn't that what great films or art or music is supposed to do?...move you in some way...either to the left or the right...stir the emotions either through laughter or love or a thrilling chill coaster, etc?

So, yes...probably with the needle buried in the "red' (no pun intended) as a "10' on the horror scale...This film is powerfully brutal and admirably disturbing. Even prepared as I was… the ending still had my mouth open and 2 minutes of uttering, "What the f--k did I just see?"

But can a horror movie be a great film? There are so few that are actually well made. Well, "Inside," besides the horror aspect, is in itself a stand up fantastic piece of film making and suspense...actually as well made as any art film. And though "Inside' delivers gore more than you can muster, the action is so compelling that you just can't look away.

Directors, Julien Maury and Alexandre Bustillo truly did a great job at maintaining the tension and suspense elements from start to finish, along with credible film making—something that very few horror films ever do.

Sarah Scaragato (Alysson Paradis), a pregnant professional photographer, is recovering from recently losing her husband in a tragic car crash. She and her unborn baby, who is due on Christmas Eve, are the only survivors.

Home alone on that fateful Christmas Eve, Sarah is still mourning the death of her spouse. She is also waiting for her mother to drive her to the hospital so she can deliver the baby. At dusk, a strange woman (Beatrice Dalle) knocks on her door, asking if she could use the phone.

Doubtful of the mysterious woman's real intentions, Sarah refuses and immediately bolts the door. But the woman attempts to force her entry, and Sarah quickly contacts the police. After thoroughly inspecting the house, the cops find no clue of an intruder, and resolve that the woman has already left.

Nevertheless, the policemen assure to guard her through the night. The woman returns and tries to yes...forcibly snatch Sarah's unborn baby, but Sarah locks herself in the bathroom. The psychopath woman chases and tortures Sarah through the night, determined to steal the baby in her womb.

Anyone who enters Sarah's house is witness to the rage and aftermath of the two women exchanging blows of life with scissors, knitting needles, mirror shards, flying kitchen appliances, and even a bayonet.

Yes, it's true...this woman wants what's "Inside." And she may or may not have reason to. True pure horror. You'll have to see how it ends.