So by now I’m sure you’ve heard about the idiotic or *Idioteque* publishing negotiations / impending legal battle between *Young and Beautiful* Lana Del Rey and *Paranoid Androids* Radiohead.

WHAT? BUT THOSE ARE TWO OF THE ONLY MUSICIANS I RESPECT I ONLY GO TO PITCHFORK MUSIC FESTIVAL AND PRIMAVERA SOUND AND HAVE A VERY MATURE TASTE. THEY CAN’T BE FEUDING! MY INDIE CRED WILL DROP IF I PICK THE WRONG SIDE OF THIS!

Okay calm down, Everything is in its Right Place. Probably.

A representative for the kings of experimental indie noise rock has brought to public attention the similarities between the brooding songstress’s 2017 song “Get Free” and their 1993 hit, that they hardly play live anymore because they’re bigger than just playing their biggest single every show come on, “Creep.”

You remember “Creep,” don’t you? From the free music compilation given away with copies of Donkey Kong Country? 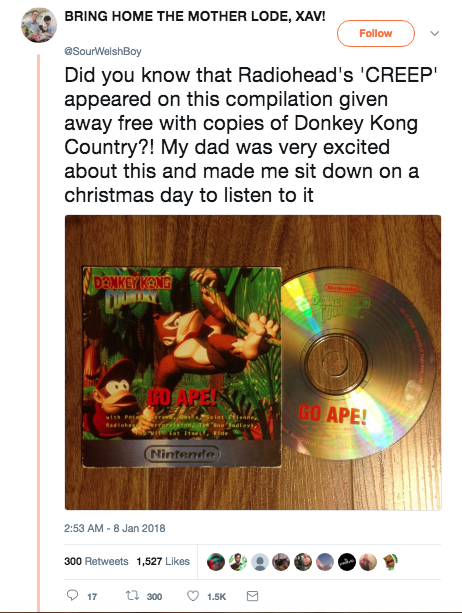 So I did some investigative journalism of my own and listened to the song in question for the first time.

And sure I hear it.

If I squint my ears and make a whole bunch of concessions and am desperate to make a connection because the rest of the internet seems to side with Radiohead and I’m just over here like “Who the fuck cares, you both have more money than you’ll ever need. Whatever comes of this better go towards some charity or some shit.” This comes after Radiohead themselves were sued for plagiarizing “Creep” from The Hollies’ “The Air That I Breathe” by the Hollies.

WHICH IS ALSO A STRETCH, SO WHAT DO I KNOW?

Maybe everybody just needs to chill out and like realize that the spectrum of all the music isn’t that wide and sometimes people make the same thing up twice or three times (or hell even five or six times) and that doesn’t mean we need to shell out mucho dinero just because of a coincidence? Unless it was a conscious decision and then it was reprehensible and “LOCK HER UP! LOCK HER UP! LOCK HER UP!” Sorry, got out of control there for a second.

Consequence of Sound posted a comparison video, “Lana Del Rey’s ‘Get Free’ vs Radiohead’s ‘Creep’” that I find even less compelling of an argument than hate listening to “Get Free” on my own saying “How dare you rip off Thommy and Johnny and the other three guys.” So what do you make of it? Do you care? Are you seething with anger or indifference? WHAT SIDE DID YOU PICK IN THE INDIE BATTLE OF 2018?

What I do find more of a compelling argument is the Bon Jovi vs Radiohead, with Bon Jovi proving to be waaay better than the indie band who had the cojones to challenge the music industry.

Rumor has it Major Lazer are gearing up to sue Lana Del Rey next for naming her song “Get Free.”

Let me leave you with a poem I wrote about all of this, or *Exit Music (for an Article)*

money money money give me lots of money
who cares that the world is falling apart, there’s more important things in the world like getting credit for a song that has vague similarities to one written 13 years ago.

can you believe that life can get this complicated?
i never knew my heart could handle these implications.

NONE OF THE AUTHORS OPINIONS REPRESENT THE OPINIONS OF WE ARE: THE GUARD.
I AM A LOOSE CANNON / FREE AGENT AND CANNOT BE SILENCED.