Ahh, the horns of hell; how they call me! The Budos Band released their first full-length album in over four years yesterday on Daptone Records, and their horn-driven sound is more savage and lusty than ever. Burnt Offering is a great name for the album, because that’s just what it is. An offering of trumpets, basslines and backing tracks which are snarling, passionate, and charred at the edges.

If it wasn’t apparent by now, The Budos Band are known for their raucous brass section, ultra-funky bass and organ tones, metal(ish) guitar, and afro-funk beat. Their retro sound is so powerfully funky that upon listening, you may literally be transported into the middle of a Shaft movie. The band is one hundred percent instrumental, allowing the horns to tell the story and the supporting music to set the scene. Previous tracks like “Up from the South” and “Rite of the Ancients” don’t really sound like they’re missing anything from lack of vocals, however; in fact the opposite is true. If Cihcago’s horn section was this good in the 70s, we could have all avoided that nasty Peter Cetera phase in the 80s and everyone would have been a lot happier.

The Budos Band III, for example, starts out with a serpentine theme, as is evidenced by the big old snake on the album cover, but the songs aren’t just about snakes; the myths and legends of snakes, their attachment to religion and our fear of them are all covered as the band takes the listener through the sound of snakes in all its forms, as long as that form can be communicated by a trumpet. How did I get all that from an album with no lyrics? Take a listen and you’ll see. The title of each track is a clue, but when you close your eyes and really listen, images will appear and a story will unfold which transcends words. Remember, music and drums came before words.

Burnt Offering is the first album by The Budos Band to have a title, and I believe it’s meant to go with and expound upon the pagan, snake cult theme of The Budos Band III. They really seem to want to drive home the ancient and transformative power of music. In this band’s case, we’re not talking New Age, either. The Budos Band is looking at the occult, the mysterious; the cry of the hellhound, the damned howling from the river Styx as Charon bashes their heads with his paddle, the sound of the rope stretching as Odin hung himself from the Tree of Life to become closer to the spirit world. This ancient and primordial mysticism is not a foreign theme to rock, especially the Nordic death metal bands, but to explore these themes with funk and no lyrics? How do they do it? Namely, the bass.

Funk comes from soul and blues, and though we may think of those types of music as Christian-based, but we must remember the origins of those are in old slave hymnals and working songs, the origins and rhythms of which are largely pagan, from Africa. Those drums and basslines have peppered all these American and largely Christian musical traditions to bring a richness and depth to even the most uplifting spiritual song. The blues, which was also born of those traditions, has always been seen as more sinister, though still monotheistic; with myths and legends about blues musicians making a deal with the devil to achieve their talent or fame.

The idea that blues and later funk is a largely darker pursuit isn’t necessarily new or novel, but until The Budos Band got a hold of it, it wasn’t necessarily explored in by way of more Eurocentric themes. By taking ideas, sounds, and traditions from European pagan sources and translating them to blues and funk, the band is almost creating a whole new genre with Burnt Offering, and I’m loving every minute of it!

Again, you may be asking how I can give this much interpretation to an album which has no lyrics. It’s not a special skill, my imagination is not particularly active, and I’m not taking all my cues from the titles and album art. You can feel these primordial, deep occult feelings as you make your way through the album; even through each song.

I mentioned the bass as being key earlier and then didn’t really go anywhere with it for a while, but it really does carry Burnt Offering, and the band in general. The bass sets a minor, sinister and devilish key right away with “Into the Fog,” and the tunnel of sound is laid before the listener, transitioning him or her into The Budos Band’s world, and in this case it’s a world of hellish music and chaos created in us by the darker forces of the universe.

The story of the traveler as he or she moves through the different parts of this world is told as the fog parts and the listener is taken into different realms (songs) and areas, each with its own crazy characters, played by the horns, and story to tell. The album descends through each circle of hell, taking you by the hand like Virgil in The Inferno, until you come to the climax (or final descent, depending on how you look at it), the crescendo that is the title track. “Burnt Offering” is grinding, chaotic, and heavily syncopated as the horns go wild in an ecstatic frenzy which ends in slow, punctuated blasts by the whole ensemble; the death throes of this insanity.

After “Burnt Offering” comes the inevitable morose grieving of loss personified in “Trail of Tears,” as the traveler mourns what he or she has seen. From there, however, a rebuilding occurs with “Magus Mountain,” “Tomahawk” and “Turn and Burn,” where the listener/traveler/hero builds strength again, fights their demons, and eventually finds a new semblance of strength and bravery in the end. I seriously didn’t make all this up; it’s all there, a story or a journey waiting to be discovered.

The story told by Burnt Offering is as old as time, and relatable on many levels. It’s a spiritual journey, it’s an epic poem, it’s the tunnel of darkness before finding light. This can be a personal struggle with one’s own demons as well; a burnt offering to the ghosts of old torments left behind, and an homage to new strength and a new journey. Am I getting too deep? I think not. As I said in the beginning, music is primal; it’s supposed to make you feel things, to think about things and to connect with whatever scary crap is clanging around in the recesses of your brain. Still too deep? Blow me. There, mood is lightened.

The Budos Band’s albums are put together in the old way where they’re meant to be listened to all the way through, all at once as one big awesome composite work. There’s no slicing off singles for marketing Youtube value with this band. Make the album its own playlist, strap in and feel those horns. Free streaming of Burnt Offering via your Facebook page can be found on the Budos Band’s website, http://thebudos.com/. There’s also a link to buy the special edition vinyl on Daptone Records’ site, which I normally recommend buying from so the band gets a bigger cut and because it’s cooler and turntables only cost like $35, but the digital version of the album is on both Amazon and itunes, where you can get the whole album or buy track by track, if you insist on being a dick about it. The band is doing a limited U.S. tour to support the album this winter (conjuring up the horns of hell can take a lot out of you), so check the website on that tip as well and if they come to your town make sure to go see them. The show is even more intense than the album, and you won’t have Virgil there to hold your hand. 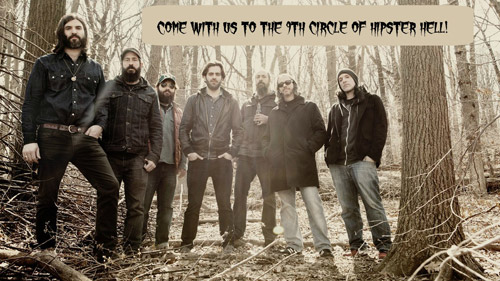