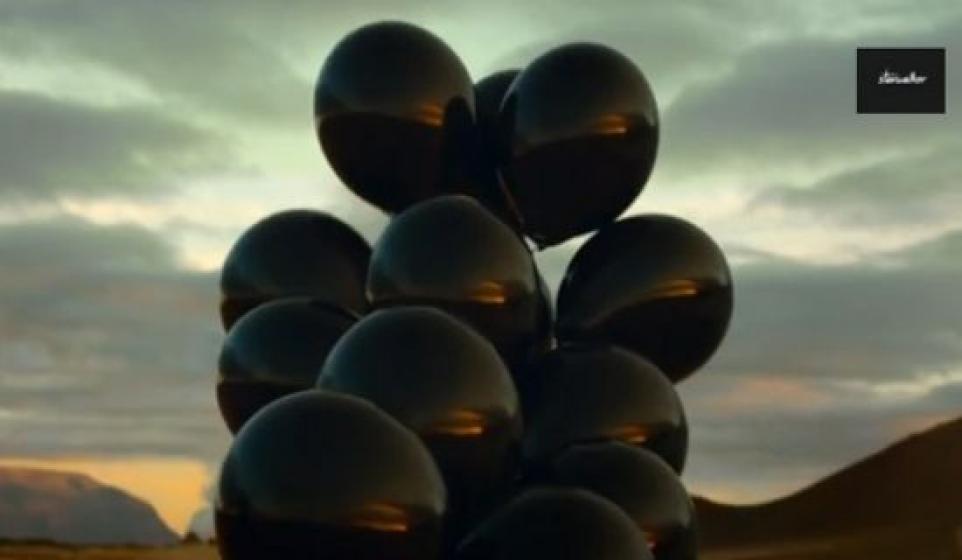 MEDIA WHORE MERRY-GO-ROUND Cont... Rhianna (surprise, huh) is the latest talent-less sorry excuse for music to grace us with their legs wide open. "Money on my mind?" Yeah, at least she's honest there. A new low in pop that just seems the norm now, sad but true. Can't make decent music? Let's make a slutty/shitty video that WILL get attention regardless (point taken). Who is next? Who gives a fuck? Let's get on to some true talent who are under the radar and deserve your ears. This week's best indie post includes STARWALKER, GOLDN RETRIEVER, FRANKLIN and something to get you WET behind the ears.

The weather may be shit but, the music is great and STARWALKER are among that goodness lifting my mood in these dreek mornings. I mentioned last week about two projects I had bookmarked awaiting their debut and this is the second installment -- after much teasing, the Electronic duo finally dropped BAD WEATHER this week along with this stellar video shot in the north of Iceland. Frenchman Jean-Benoit Duncke and Iceland's Bardi Johannsson are intriguing and dark. I dig it + the fact the brilliant Bloodgroup (former find) have only went and supplied the remix.

WET (I am now) poor pun, yes, doesn't help 'Dreams' is the aptly named second track. However this New York trio have a valid couple of reasons (tracks) for just why I won't be the first or last to use their name in that manner - Kelly Zutrau's soulful vocals & that killer chorus was enough to hook this one. Grab the EP next week.

OH FUCK! A genuine reaction to hearing this euphoric track from London's GOLDN RETRIEVER - A reaction too few and far between when getting through my unhealthy volume of music. This stands out as some of the finest synthpop heard in recent times and worth noting his latest release 'I Feel Great Now' which just dropped yesterday. It nods more towards his French influence -- think Kavinsky.

Enjoying this from Houston 'mofo' JREAMZ. The vid is short but long enough with its unnerving and dark shoot that had me fixated. I don't know enough about him (yet) to wax lyrical other than he's grabbed my attention.

Breaking it up with some indie acoustic here with pop sensibilities running through their vibe, it's FRANKLIN, a young duo emerging from the UK. And young, as in, lead Alex Frankl is only 16 years old! That's just fuckin' crazy for the maturity he's holding. Brandon Hargrave, 20, is the equally promising talent in this duo. I have their debut album to get through this weekend. For now, here is the catchy 'HEY' as an introduction.

TO BE FRANK - HALF THE MAN

Flagged up the minimal 'If You Love Her' last month as a perfect example of his solid vocal over his latest release 'Half The Man.' TBF put out this stunning video for the latter, apparently the first of its kind to be shot entirely in infrared. Either way, it's neat, and Frank is pretty captivating in his wardrobe entering Narnia style.G

Will HAERTS ever eclipse that sublime debut, WINGS? Who knows, but it was such a strong debut that expectations are high. I was one on the fence with 'All The Days' and admit a little doubt had nested. HEMIPLEGIA, with their trademark pulsating beginning, is a good return and perhaps a message for us doubters is there to move from the debut - 'You can't look up, With your eyes down.'

I introduced PATRÌCE's cracking R&B debut here some weeks ago, which was received well. Now he's teamed up with us here at Bitcandy (sort of thing that makes being a Curator ace -- you should try it) to offer FÜCHSE's edit as a free download via Bitcandy, and a pretty HAWT edit it is.

Cool as fark! Literally digging this number from Australia's Courtney Barnett. Touch of Alanis Morissette but way more hip? Grab your headphones and listen to these quality lyrics, then hit repeat.

Fresh on my radar is New Jersey's BLOOD CULTURES with his Dream Pop debut, Indian Summer. Much like his masked face, I can barely find any info on him, other than if you head over to his Bandcamp and download this, It's the best dollar you're likely to part with this week.

See ya next week! Keep it fresh, keep it Bitcandy.