Where The Hell's The Next Great Rock Band? 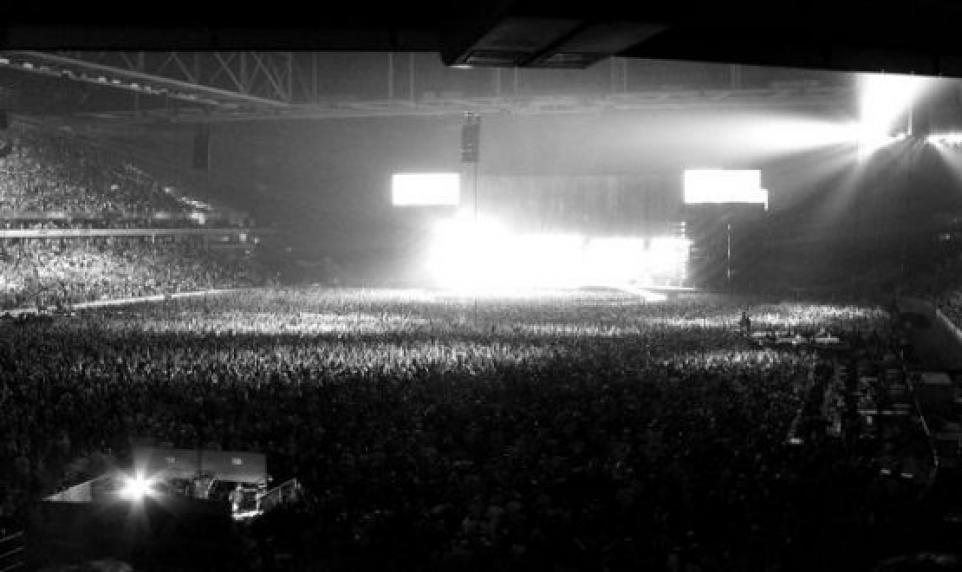 'Tis our editorial opinion here at BitCandy that there hasn't been a great arena rock superstar band like U2 to emerge on the music scene in the past decade or so. So why is this? It seems like that being in the age of the Internet, it shouldn't be difficult for fantastic talent to be discovered, and more memorable rock acts should have become huge by now. That's not to say that the 2000s haven't witnessed any great rock talent -- there's been some excellent indie rock bands like Kasabian and Arcade Fire... still, would you describe either of these groups as "huge"? Will they even be around in ten years?

I mean, really, think of all the stadium rock acts of the '60s, '70s and '80s. There were fewer in the '90s, although the alternative rock movement produced a few exceptional standouts like Nirvana, Pearl Jam, Radiohead and Foo Fighters. Coldplay came along (and "wrote a song for you, and all the things you do") and made it big in 2000 with some early Radiohead-style sweet alt. rock love songs we didn't realize we were craving. And while their latest music kind of bores us, Coldplay might have been only "arena rock" act to break out, so far, in this century.

Of course, some rock bands of previous eras continue their momentum. Foo Fighters still release a solid album every couple of years and in 2008 sold out Madison Square Garden, the pinnacle of stadium rock success. U2 is also still doing their thing (despite not putting out a memorable album since 2000's "All That You Can't Leave Behind") as is Radiohead, although they aren't really rock anymore (and some might argue their albums aren't even listenable anymore). Also still touring is Dave Mathews Band, who most people are embarrassed they ever liked in the first place and would rather forget, along with other shameful college memories. Oh, and let's not forget that the Rolling Stones somehow continue to defy science by keeping Keith Richards alive enough to tour the world nonstop without having to resort to "Weekend at Bernies"-style tactics.

But how about something new? In the early 2000s as the indie/garage rock sound took flight, bands like The Strokes and The White Stripes were hailed as rock's saviors ... but those hopes fizzled out after The Strokes dropped the ball after their first album and Jack White decided he'd focus on acting, dating actresses and making mediocre solo stuff instead of being in a band. It's been more of the same with other 2000s indie rockers -- they have one great album and people think they're going to be the next big thing, only to later release not-so-great follow-up albums or just, for whatever reason, never catch on big.

Kings of Leon seemed like they might get huge for a minute, after 2008's stellar "Only by the Night" and subsequent sell-out of Madison Square Garden, but their 2010 album and tour were a huge disappointment and the band has since slunk into hiatus. Other 2000s indie rock bands that seemed like they could have become big but instead ultimately fell into the "decent indie band" rut include Death Cab for Cutie, Arctic Monkeys, MGMT and Vampire Weekend.

So what's goin' on? Why won't anybody BRANG IT? Here are some possible reasons we can think of.

1) Lack of development by labels: There might be a dozen "next U2s" in small towns scattered around the world that just need development, time, funding and nurturing. But this doesn't happen anymore in a major label environment. Historically, bands need about four albums of development to break. True, a band sometimes generates major buzz with their first album if it's a great one, but if you think a one-hit-wonder like Foster the People really has any staying power, you're high (listen to the rest of their album: it stinks to high hell).

2)  The "Me" generation brought up on the Internet: Young people of the 2000s want things instantaneously and may not want to put in the Malcolm Gladwell proverbial 10,000 hours of work (Read "Outliers") into developing craft, stage presence, recording chops, etc. Instead, bands focus on generating "hype" and building their Facebook "likes" rather than making great music, and get by selling 20,000 albums to maintain their mediocre, "dime a dozen" status.

3) Maybe all the good songs in the universe have already been written? Say it ain't so...

4) Creed ruined rock for everyone, forever.

Still, we haven't given up on rock just yet and are hopeful that there's a band out there who could still write the rock anthem of our generation. Hey, speaking of selling out MSG, Arcade Fire did it in 2010. Still, we can't help but feel that they are the pinnacle of indie rock, rather than full-blown rock superstars. (Does anyone even know the lead singer's name?) But maybe other great indie bands like Spoon and The Black Keys haven't reached their "Tipping Point" yet (sorry for the seemingly inordinate number of Malcolm Gladwell references in this editorial).

Other questions to consider: do we really want our favorite indie bands to get huge and turn all corporate cock rock on us? Or to return to the cheesy butt-rock days of the 80s? Or might we just rather just continue popping Xanax and listening to shoegazer electronica over Wifi in the private comfort of our apartments than spend hundreds of bucks on concert tickets and Jager?

Now that you've heard our editorial opinion, give us yours! Are there any great rock bands with arena potential that we've overlooked?