In the style of Paris Hilton, Willow Smith is trying to show that she’s more than a fortunate female who inherited a legacy. So, with funding and assistance from the legacy that she inherited, Miss Willow Smith’s new single “Heart” knocks it out of the park and starts 2015 out with, need I say, a hydrogen bang. I’ve always been skeptical about her work since she came out with that song back in 2010 about being a hooker. I found myself asking, “Would she ever become the next Justice Beever?” or “Would she follow in her brother’s footsteps and inevitably be cast as the female lead in the ‘Next Karate Kid’ remake?”

Well, in the words of Taylor Swift, “haters gonna hate (100x).” This song is so damn good and catchy, that all the electronica and autotune couldn’t keep Miss Smith’s voice in key, nor hold back her creative inhibitions. It’s like watching a sci-fi movie, but you know, one that really expands your mind and gets you thinking. I felt like I just re-read Kim Stanley Robinson’s “2312” but the Wikipedia entry. She clearly has a firm grasp on participatory economics and where overpopulating and the over usage of our natural resources is going to lead. And unlike that hack Robinson, who took over 500 pages, she nails it in 500 words. With “Heart,” you’ll be asking yourself the important questions like, “What the fuck is she talking about?” I’m just a mere mortal, so clearly my intellect is something that can’t match that of a 14-year-old, so I’m just going to keep my silly questions to myself. 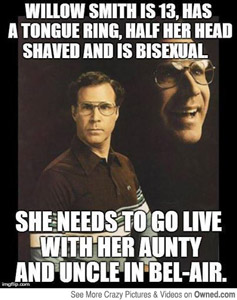 With her punk rock approach of not singing in key, Miss Smith continues to take a step out of conventional musical boundaries with “Heart” by not keeping up with her own beat. And you know what, kudos to her! It’s clear that she is following the style of the Sex Pistols and giving “the man” a big middle finger. She doesn’t need to keep or follow a beat. As long as there are 14 producers writing her lyrics and looping the track, all she has to do is pour her heart and soul into screeching about creating terrariums off key. She pulls it off and you would never guess that she comes from a background of nepotism.

I’m really excited to witness this song as a live performance. I’m curious as to which parts she will actually sing live and which parts will be backtracked. With her “Whip My Hair” hit, she backtracks the chorus live and only sings the verses.

WILLOW SMITH - WHIP MY HAIR (LIVE AT THE FADER FORT)

Let’s be honest; actually singing the main hook of your song live is for old farts. When you’re a successful inheritor lacking musical integrity, why should you properly perform your songs live? If we’re in luck, the entirety of “Heart” will be backtracked live, while Willow sits on stage and reads Jaden’s tweets about blue trees. If this is a sign of what is to come in 2015, I can prolong my inevitable suicide just a little bit longer.