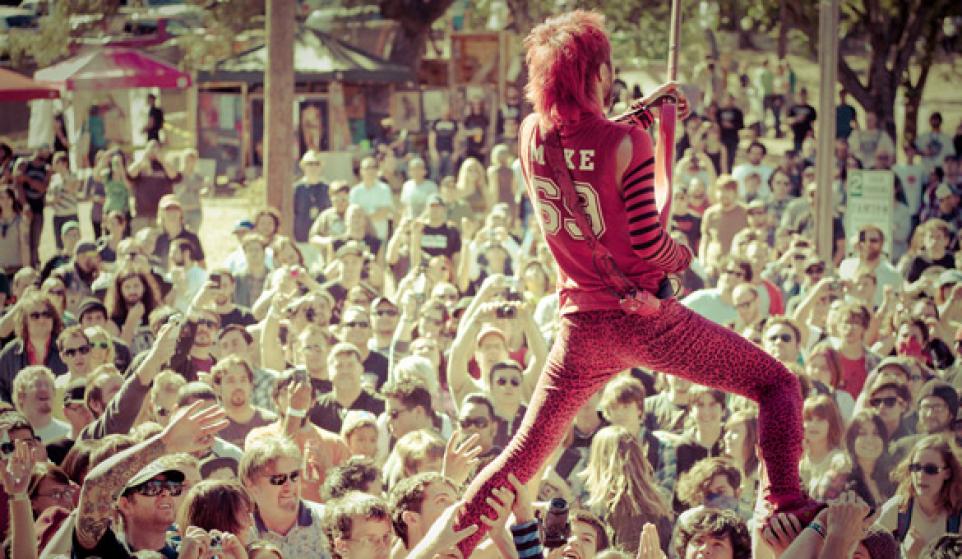 You go to concerts to get as close as you can to your favorite singers. If crowd surfing is part of their routine, then sometimes your favorite singer will literally be on top of you. Some performers are clearly more practiced at the art of jumping off stage and being passed around several feet in the air through the audience. Others, well, kind of suck at it. Either way, crowd surfing can be one of the most entertaining parts of concerts. Here are 10 of our favorite crowd surfing moments:

Dutch rock star John Coffey couldn’t leave it at just jumping out into the crowd (in quite a grateful manner, we should add). Just seconds after he landed amongst a throng of his fans, a random fan threw a full cup of some liquid into the air and John caught it and downed it in one smooth move. Alcoholic or acrobatic?

Everyone knows Macklemore is a skilled thrift shopper, but are you aware he can basically walk in the air too? While crowd surfing for most singers just means letting fans roll you around above their heads, Macklemore remains upright while still moving during most of the video. Take a look for yourself!

Those less competent in how to crowd surf can take a cue from the rodents. That’s just what Jeremy from A Day To Remember did during the group’s 2013 House Party tour. Take a look at the video to see how the singer rolled on top of the crowd while inside a human-sized hamster ball.

Music festivals like Lollapalooza are known for being a place where crazy things happen. In 2010, Lady Gaga crowd surfed during her set and everything started off normally. Then, she stopped rolling and landed with her legs around some random guy’s neck. Lucky guy…

Katy Perry can probably surf in the ocean, because that’s what people in California do, right? But, it doesn’t seem as if crowd surfing is a part of the Cali girl course book. See for yourself how awkward it was when Katy Perry tried to get in on the crowd surfing game.

In the olden days, kings and queens would be carried in chariots through the crowds while all their subjects would try to get a closer look and maybe touch them. That’s kind of the scenario that happened when Beyonce crowd surfed during a performance of Halo. Except I’m pretty sure the devotees of Queen Bey are much more loyal than the subjects of any actual kingdom.

7. WHY SURF WHEN YOU CAN WALK?

Kim of Matt & Kim duo might have just started the next coolest trend. Kim not only gracefully walks on top of this crowd of amazed fans, but she also stops to twerk what her mama gave her. Work it girl.

8. DARE DEVIL INTO THE CROWD

Surf’s up! When the wave’s looking good, why not go out there with your surfboard and test out the crowd? That’s exactly what the Canadian musician Rich Aucoin did at Evolve 2010.

10. BRING THE MUSIC TO THE CROWD

Israeli rock band Monotonix has been known to put on animated shows for the crowd, setting instruments on fire, getting naked on stage and climbing stage structures. The lead singer will even bring the performance into the crowd by bringing his drum set with him.

When it comes to entertainment, these music pros know how to kick it up a notch by delving themselves into the crowd, whether they’re mastering their crowdsurf or crowdwalk. If you’re one of those lucky fans who get to take part of this experience, make sure you’re strong enough to support them or else get out of the way to avoid being squashed like a cockroach.

"Peelander Z" by Incase is licensed under CC BY 2.0 (cropped and resized).