Before we get to today's edition of We Are: The Guard's 10 Twitter Moments, I have one very important question to ask you: Did YOU get fired as Beyoncé's assistant?! Because I sure as hell did – five freakin' times! Note to self: NEVER spend $800 on titanium drinking straws! Anyways, alongside playing @CORNYASSBITCH's GENIUS choose your own adventure-style thread game, the team and I have been busy as ever this week searching through Twitter for all of the latest, greatest tweets from our favorite artists. Cancel your Hump Day plans, then, as you're not going to want to miss out on the following 280-character highlights from Lil Nas X, Miley Cyrus, Ariana Grande, Rihanna, Shawn Mendes, and more.

Holy shiii...! British chef Gordon Ramsey is really out here threatening to end every rapper's career by jumping on a remix of Lil Nas X's “Panini!” Something tells me that this ambitious crossover event is going to require several Parental Advisory stickers!

Okay, so, apparently Gordon Ramsay isn't the only person jumping on “Panini!” And since he's already collaborated with Billy Ray Cyrus, it makes sense that Lil Nas X would stretch the invite to Miley Cyrus...sorry...Ashley O! Do you think that they discussed their mutual love for Nine Inch Nails?!

I'm pretty sure that Twitter drafts tell you more about a person than almost anything else. And it goes without saying that Halsey's Twitter drafts tell us a LOT! I mean...: “It's 2019 and like the 5th white guy has used my name in a song for attention. Bitch I will literally kill all of you.” GO OFFFFF, ASHLEY!

P.S. Was anyone else triggered by Halsey's low battery?!

Damn but these hard asf pic.twitter.com/gJtnwxsgQL

Rico Nasty is well known for pushing the boundaries of fashion, but I'm thinking that the Anger Management rapper has taken things a little TOO far with these artificial grass sliders! For real – my body is itching all over just thinking about wearing them! *Scratches*

ARIANA GRANDE AND MYRON ARE TOO WHOLESOME FOR WORDS

i’m sleeeep .... body, throat, everything tired as hell .... but grateful as fuck. too grateful to go back to bed if that’s a thing. look how me & myron sleep. pic.twitter.com/sSk0SyIQsx

Me every time that Ariana Grande posts a photo of Myron (Mac Miller's dog, for the locals): 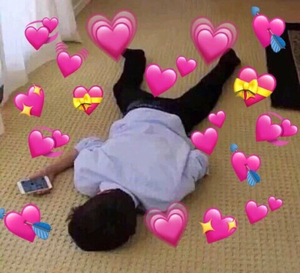 LIZZO BEING CHEERED BY RIHANNA AT THE BET AWARDS IS EVERYTHING!

You KNOW that you've made it when Robyn freakin' Fenty is out here giving you a standing ovation before you've even finished your gotdamn song! It's all that Lizzo deserved after giving the performance of her LIFE at the BET Awards on Monday night. I just have one question...WHERE IS THE COLLAB?!

Your Amazing! You already know

RIHANNA IS A BADDY IN FEИTY

And while we're on the topic of Rihanna, allow me to quickly refer you to what may be the greatest flex ever known to man. RiRi wearing FEИTY – aka her very own fashion brand – to the BET Awards on Monday evening. WE STAN A BOSS BITCH!

I just wrote a new song and the first line is. No one dies a virgin cause life fucks us all.

That awkward moment when you copy a famous Kurt Cobain quote and try to pass it off as your own. Remember, Bebe: Emo Twitter never forgets!

P.S. I guarantee that this song will still be a bop, though.

SHAWN MENDES AND CAMILA CABELLO GET HOT AND BOTHERED IN “SEÑORITA”

I must have had 300 mints that day https://t.co/3ZiEooAFOk

Erm, so, I'm not one to gossip or anything (oh, who am I kidding?!), but it's surely no coincidence that Camila Cabello broke up with her boyfriend just days after dropping the sexy Shawn Mendes collaboration “Señorita?!” I'm pretty certain that no girl could resist Shawn on top of them...bad breath or not!

i forgot the password to this account so i guess this is going to be on the internet forever https://t.co/ihKj9H5Iou

OMG! This video of a pre-fame Troye Sivan giving us a review of a can of paint is nothing short of ICONIC! Like, even more iconic than the “Bloom” video. I particularly love the fact that he calls his YouTube channel “TS Productions 18.” An entrepreneur and influencer, much?!