If you're feeling the Hump Day Slump™ this Wednesday, fear not as the team and I are here to help with the latest edition of We Are: The Guard's 10 Twitter Moments! That's right, it's that time of the week where we invite you to set aside the mundane realities of your nine-to-five and instead immerse yourself in the 280-character lives of the rich and famous! Just remember to lock your office door before your boss sees you scrolling through the following tweets from Megan Thee Stallion, Lady Gaga, The Weeknd, Bebe Rexha, Cardi B, and more!

After my mom passed I promised myself I was going to keep going hard bc not only is music my dream but it was her dream for me too. I have days where I want to go hide and cry bc she’s not here but i kno that ain’t what she would want me to do! I kno she’s proud of me !

I'M NOT CRYING, YOU'RE CRYING! Seriously, though, I have no doubt Megan Thee Stallion's mom is looking down on her proud as can be from Hot Girl Heaven <3.

the superior version of the song pic.twitter.com/7GKIuW1vYz

P.S. Why does this slap so hard?

this is how I sound when I sing it https://t.co/uZLqQdtxve

A guy on the Bus Stop just yelled at me “Jay Z’s got more money that you!!” as I drove by... I though that kinda shit only happens on Twitter! Lol

Okay, sure, JAY-Z may have more money than Ice-T, but did JAY-Z star as a gangster vampire in what is perhaps the most underrated action-horror of our generation, Bloodrunners? CASE CLOSED!

LADY GAGA IS FEELING HERSELF

Lady Gaga tweeting she's “so snatched” from the launch party of Haus Laboratories is quite honestly the mood and energy of the year. I mean, WHERE IS THE LIE?

Omg little goth me just went 2 the @SavageXFenty by @rihanna fashion show & it makes me SO happy 2 see all different shapes and sizes and skin tones on the runway it’s hoW it sHoUld BE aLL thE TIME!!!!!! pic.twitter.com/XiTKHYIzrZ

This video of Bishop Briggs posing outside of Rihanna's Savage X Fenty show at New York Fashion Week is the definition of wholesome. No, really, isn't she the cutest goth you ever did see? WE MUST PROTECT HER AT ALL COSTS!

THE WEEKND HANGS OUT WITH LAKEITH STANFIELD

lakeith in the cut pic.twitter.com/LXLMsdjzAb

Lakeith Stanfield, The Weeknd, Timothée Chalamet, and Josh Safdie all in the one pic? THIS IS WAY TOO MUCH FOR MY OVARIES TO HANDLE! Just don't tell Kid Cudi he wasn't invited...

BEBE REXHA TAKES HER TWERKING TO THE SKIES

In case of emergency please back that ass up pic.twitter.com/SHbYbcXh0g

And now for some personal news. I'm pleased to announce this video of Bebe Rexha twerking on her private jet has officially cured my life-long fear of flying. “Toxic” by Britney Spears COULD NEVER!

THIS GLOW UP, THOUGH! 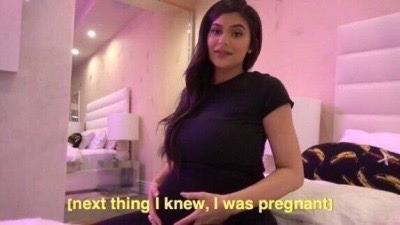 I wish I had a high school reunion .I would turn the fuck up like it’s 2010 but I know Bronx schools don’t be doing that shit

Not to be dramatic or anything, but I think I'd rather die a slow and painful death than go to my high school reunion. If Cardi B was attending, however, I'm pretty sure it'd be an entirely different story...

i went to mine last year.
i felt petty for going
until i saw the person who threw my raps on the ground when i’d be writing in class,
and then i felt awesome

The only #10YearChallenge that matters. I'M SUCH A PROUD STAN :'(!