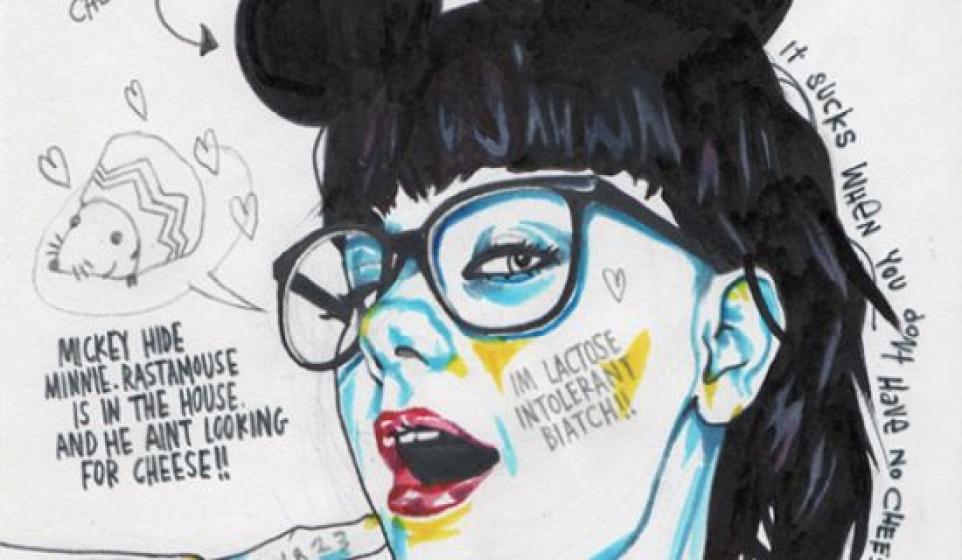 Busy week for GaGA huh? Not only a 15-a-day blunter on the back of tearing up London's fashion fuckers. But, also allegedly lined up as the first pop star to karaoke in space, via Virgin Galactic (oh the irony) - ahh man that is brilliant! Moving onto some uhm.. grounded music, isolate yourselves (minus helmet) for this week's filtered licks, including... Broken Bells, FMLYBND, Novo Amor, and introducing Dog Orchestra! (Artwork by the talented @MrFrivolous.)

BROKEN BELLS - HOLDING ON FOR LIFE

From all the hyped tracks heard this week over the blogosphere - this is the jam of the week. It's not an original pick; any buzz blog worthy of your time will have it posted. Avoiding [insert sounds like] I'll just add it's one of the most enjoyable tracks around at present.

If you're looking for a indie-pop fix this week, 'Jenny Broke The Window' will provide that hit. Feeling a little Foster The People here? Smashed it.

Birmingham's indie trio, Victories At Sea, this week released a great nostalgia visual for the epic closing track, "Low," taken from their notable In Memory Of debut EP.

Restoring little faith that Soundcloud can still be used as a discovery tool is Swedish via Berlin duo, Dog Orchestra. After finding this project, I struggled to get any info about 'em, not even a blog entry. In the end I sent some direct mailage last week to get an idea of who the fuck was behind this track (apart from the lush LUNE) I had on repeat. The duo tells us they're looking to expand into a "collective of creative friends and new acquaintances." If Linnea Martinson is one of the first to collab? This is an early interest for 2014.

Welsh multi-instrumentilst Novo Amor (Ali Lacey) is the latest musician to carry the Vernon-tag. But this isn't mutton dressed as lamb, it's the closest I've heard anyone merit that buzz worthy cliché. His debut Drift EP is worth wrapping your ears around, and check out his nailed on Bon Iver cover of "Towers" on the tube.

Introduced this in Best Of Indie Week 35 - and though still a bit miffed at the self-description (Pink Floyd and The Clash playing at a MGMT party) probably written GaGa while stoned? They do make some cracking ear candy.

I've always found Sibble Attar streams hard to find, Kudos Danger Village with this one. She has had many projects in the past, but her solo debut is up there with Sweden's A-list.

Two favourites here with Cosmo remixing Sivu's "I Lost Myself" bringing a great spin on the original, simple yet effective visual, to boot.

Dipping into indie Oz again this week. Hip-Hop artist Mathus is new to most of us. But he's an underground legend for many more. Support slots for RZA & GHOSTPOET to namedrop a couple, he's about to emerge above ground himself after a decade involved shaping Australia's hip-hop and electronic scene.

We heart Isla Vista 6 piece FMLYBND here at Bitcandy and their latest video for the banging "Come Alive" dropped this week. One of 2013's most exciting noobs - this video will put your hipster ass right in gear for the weekend.

See ya next week, Keep it fresh, Keep it Bitcandy!