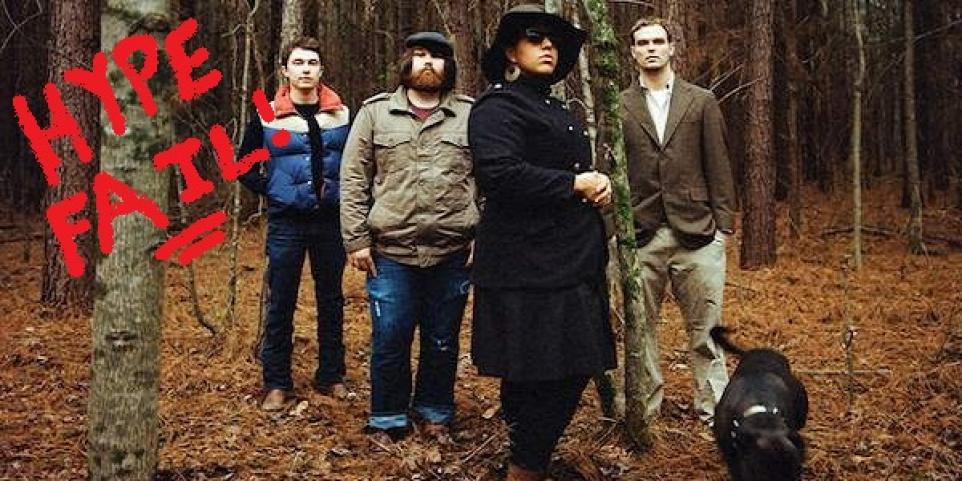 Alabama Shakes are an upcoming run-of-the-mill indie band who happen to be fronted by a curvy black chick with a husky blues voice. If we were the rest of the music blogosphere, based on this 'authentic' aesthetic alone, we would have already labeled this quartet the "next big thing" (and that's without hearing the music, too).

Luckily, BitCandy are not the rest of the blogosphere!

Reading scribbles on this band and you are immediately presented with mind-numbingly obvious and appallingly overblown comparisons to Janis Joplin, comparisons which are themselves adjacent to a stack of clichés ala "singer, Brittany Howard's heart-on-sleeve passion," which apparently "possesses the blues and the spirit of rock and roll in such a way that is so visceral and true that it renders all else completely irrelevant" (seriously, these are *actual* quotes). Or why not take The New York Times' Jon Pareles, who is already applauding Alabama Shakes' totally bona fide approach to music, man: "Imagine a CMJ buzz band not built around some cool-headed concept involving noise or irony or ambiguities or primitivism. Imagine a band not trying to make a fashion or anti-fashion statement... Imagine a band named after a place that actually comes from that place." Well, how about we imagine a band that is actually WORTH all of that overkill hype (aka… not Alabama Shakes).

I mean, sure, the band's heart appears to be in the right place. But that doesn't mean they actually SOUND any good! And anyways, anyone can regurgitate classic soul-rock pastiche if they try hard enough. But it takes something special to actually be able to stand up independently alongside those greats you are plagiarizing. And Alabama Shakes do not stand up. And here's why: musically, they bomb, big time. I mean, have you heard their debut EP? Well, um, where are the songs... you know… those supposed "classics" that they've written that are going to step up to Allman Bros or Otis Redding? Soz guys, but, nobody will be listening to your snooze-fest in 5, 10 or 50 years time. We'll just refer to the (better) originals instead!

Finally, to the hipster blogosphere, here's a tip. Next time you wanna label a band the "next big thing," rather than going on shallow aesthetic alone, you might wanna listen to the music first. After all, is that not the most important thing? Solid, hard tunes. Fact of the matter is, Alabama Shakes have none.

Stream the album's first single, "Hold On," at the band's website.