GET DRUNK ON "RICH BITCH JUICE"

Being rich means different things to everyone. We can all agree that it means being worry-free, but defining “worry-free” differs from person to person.

For some folks, it means the mortgages are paid off on their 3rd and 4th properties. For others, it means you don’t look at menu prices when you go out to eat, just order whatever you want.

For New York City-based musician and DJ Alice Longyu Gao, it means being able to truly relax and drink some “Rich Bitch Juice”.

The self-described "Princess of Manifestation” is trying to will this all into existence with the help of Dylan Brady, one-half of the cult-favorites 100 gecs. Gao and Brady collaborated on a pair of songs based on memes they enjoy. 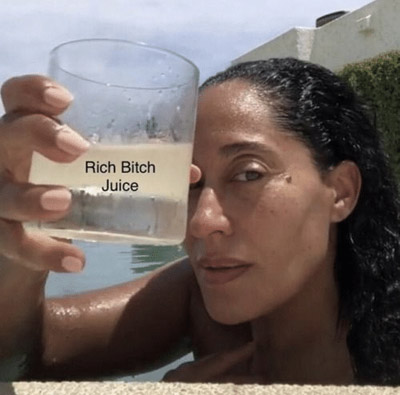 “I hope one day I can genuinely chill out and feel like being myself is enough, being here is enough, and be grounded,” Alice told Paper Mag about the song’s meaning.

“Rich Bitch Juice” is all heavy, booming bass and metallic clanging. Repetitive, sing-song lyrics scatter the industrial soundscape. Gao is a colorful and charismatic artist, but “Rich Bitch Juice” is all loud manic energy. RBJ (as no one is calling it) is a gloomy trap beat that’s part opulence anthem, part viral TikTok clip that’s a little too self-aware.

Which is to say, it’s nearly perfect.

Earlier this year Gao released visuals for the song. Experience both below.

Gao moved from China to go to school in the States a few years ago. She’s currently working on her debut Juice EP, which is due out later this year. Given that the world is currently in a holding pattern, the record could easily be delayed along with the rest of existence.

In the meantime, check out “Dumb Bitch Juice”, the other song Gao made with Dylan Brady. There’s also a slew of “Rich Bitch Juice” remixes to wet your whistle with.