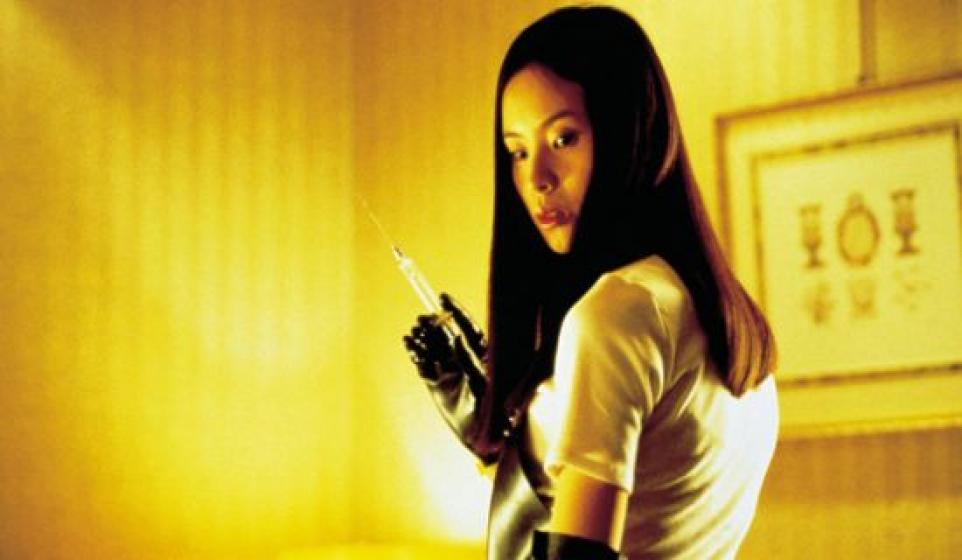 Here Kitty, Kitty, Kitty Kitty.  Guess who is making the best horror movies these days? Nope, not the Americans, Swedes, Danes nor the Transylvanians.  (Of course, the Swedes and Danes have been so totally on top on making the best thrillers of late).

If you're looking for horror....you guessed it (or not!), the best horror films of late are coming out of the East.  Yup, Japan and South Korea. On that note, I present to you, "Audition," directed by Takashi Miike, actually rated #11 by Bravo Movie Channel as one of the scariest movies on celluloid.

Let me warn you a little here first...this movie is out of control. I mean really—it is. In fact, during its 2001 premier in Ireland, a few viewers collapsed in shock, and one was even rushed to the hospital according to Wikipedia. But like most foreign films, "Audition" can be at times bordering on laboriously slow-paced, so don't expect terrifying scenes to emerge from the first 90-minutes. Though it's slow going for a while, it ultimately pays off big time. So, just hang in there, as the last 15 minutes are a grim, fascinating roller coaster.

And warning to potential viewers, you may have to turn away from some scenes—not in its
gruesomeness but in its genuinely creepiness and horror. Plus, Audition is certainly going to leave you freaked out, complete with matching chills and thrills.

And that's when you know that you are indeed watching a great Japanese horror film. Watch out for the best line in the film, "Here Kitty, Kitty, Kitty," which is said so softly with accompanying acupuncture needles and wire cutters in tow. You'll see (if you still have your eyes open).

"Audition" is the story of a middle-aged, lonesome film studio executive and widower, Shigeharu Aoyama (Ryo Ishibashi), who is convinced by his teenage son, Shigehiko Aoyama (Tetsu Sawaki) to hit the dating scene again and look for a new wife. He confides his apprehension to his friend and movie business partner, Yasuhisa Yoshikawa (Kunimura Jun), who suggests that they, through their involvement in the movie business, set up mock auditions for a non-existent female character.  The audition will be a way for Shigeharu to meet and interview for a potential new companion.

Shigehara Aoyama narrows the resumes down to thirty shortlisted potential wives. During the audition day, he chooses Asami Yamazaki (Eihi Shiina), a Korean ex-ballerina, who seems timid and mysterious, and hesitant to discuss her past. Asami admits that she is not expecting to get the role, and just wants to test herself and try out.  Shigehara is instantly mesmerized, and they soon begin dating.

The more time he spends with her, the more curious she becomes. That's why when she disappears, totally out of the blue  He tracks her down by investigating a few clues he knows from her past. At this time, "Audition" takes a bizarre twist and Shigehara discovers Asami's true identity—a psychotic, mentally disturbed young woman with a horrific penchant for needles.