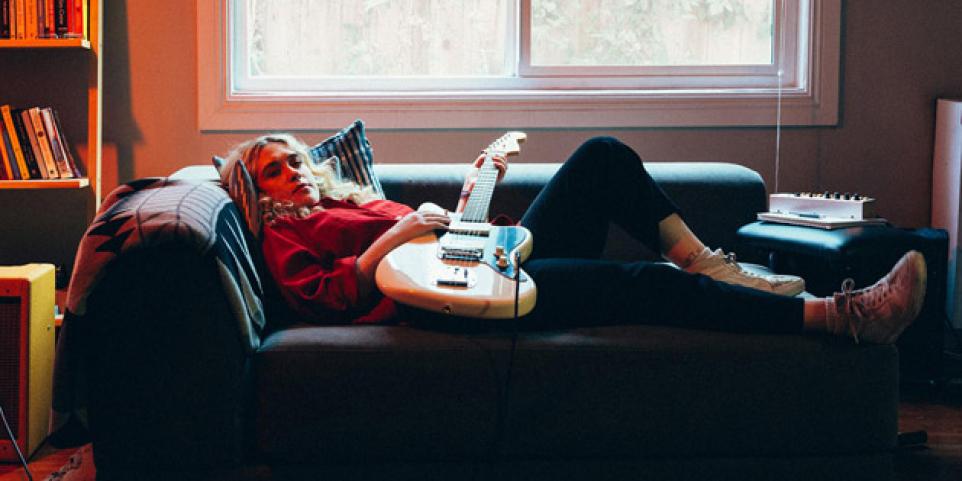 Baum gets intimate with an acoustic version of her gender-nonconforming single "F*ckboy."

Los Angeles' BAUM has been smashing stereotypes her entire career. She's been an outspoken activist for body positivity. She's been a loud-and-proud card carrying feminist. Being a feminist is no simple thing in 2020. It's a confusing, loaded landscape, with competing ideologies and warring waves. Feminism is not monolithic, and it creates some sometimes conflicting movements and emotions.

Feminism is, at its heart, about equal opportunity. It's about not making assumptions about women's inherent qualities and then saying what they can or can't do based on said stereotypes. Some of those stereotypes can be positive, though, which is where things get confusing.

On "F*ckboy," one of her most recent singles, NYC-turned-Los-Angeles-based singer/songwriter Baum investigates this notion that women are so pure and so selfless in love, that they could never just want to hook up, that they're always pushing for a relationship. Baum is here to show us, with "F*ckboy," that's simply not the case.

There always seemed to be a bit of bravado going on with "F*ckboy," that she's trying to convince herself, or us, that she's good, that there's no feelings involved. Playing things stoic and detached is still playing into old gender roles and stereotypes, though. It just has Baum playing at being tough instead of being soft or vulnerable. There's nothing inherently revolutionary about that. Successful women have been emulating men for over 100 years at this point.

This new acoustic version of "F*ckboy" is revolutionary, however, in its intimacy. Stripped of Baum's usual future pop production, the innuendo and snark and hidden meanings come through. It also lets you appreciate all that is so wonderful about Baum's music. Which, in the case of "F*ckboy (Acoustic Version)" is Baum's voice, clear as Waterford crystal and smooth as Beijing silk, the perfect carrier for all of the hidden meaning and feeling behind "F*ckboy."

Yes, Baum, women can be f*ckboys, too. But why would you want to be? It's certainly not aspirational. Nor do you have to force yourself to be one. With "F*ckboy," Baum also asks us to reinvestigate how we think about love and relationships. You don't have to want to marry someone and have their babies to care about them. You can still have a connection, no matter how short and how sweet it may be.

With "F*ckboy," Baum encourages us to all to really look into love before writing anybody or anything off. We Are: The Guard are so so excited to be showcasing this premier of this exquisite acoustic version of this complicated-but-irresistible pop ballad.