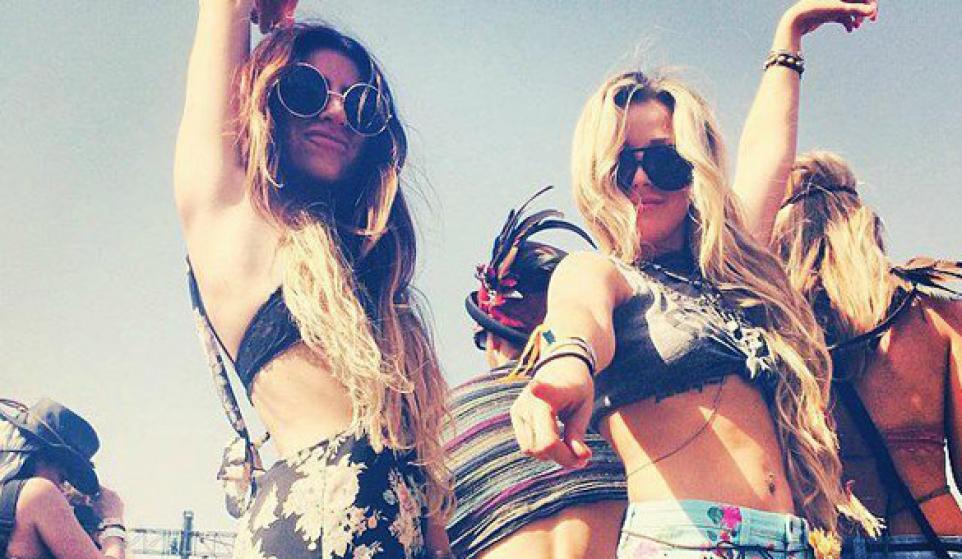 Sad news for those of you who have been collecting flowers for your cute flower crowns that you will be sporting at Coachella this weekend. Coachella has recently announced that they are banning all upper head gear. No! Say it ain’t so! Just kidding, there would be way too much drama if that shit ever were announced. The crowns aren’t banned but we do suggest that festival attendees leave the flowers behind. I think there’d be a better chance of banning any one of today’s featured artists than forbidding the entrance of the most prized possession of the ordinary white girl. Moving on to the main reason of why I’m here writing this post, it’s that time of the week where BitCandy and yours truly announce the top indie pop songs. Drum roll please!

First up on our list is a track that has been on heavy rotation here at BitCandy. PC Music beasts A.G. Cook and Sophie have released a video for their infectious single, “Hey QT.” The video, starring Quinn Thomas, takes place in a lab. There we see how Thomas creates the the all natural fizzy and bouncy elixir known to us as QT. On a side note: This video has a pretty entertaining comment thread.

It’s time to rejoice, Muse is back, Muse is back! Yes Muse is back and they sound like the Muse we have all grew to love. “Dead Inside” is the where the story of their upcoming album, Drones, begins. It’s expected to be an exciting album that will have fans cheering for the protagonist.

Baauer’s latest material has errbody talking about it. The collaboration featuring rapper Fetty Wap and Producer Dubbel Dutch has taken the internet by storm and is about to blow up. “Promises” delivers thick lyrics with a melodies that will stick to your head. Dive right in to your new favorite song above.

FMLYBND returns with delicious feel good offering, showcasing the vocals of Braelyn Montgomery and they are truly beautiful. ‘Euphoria’ is doused in sun soaked melodies and a respectful use of synths that melt together to create a state of bliss. We are beyond euphoric with their latest release and can’t wait to for future material.

I’m not sure I was quite prepared for the music sound I was soon going to find myself liking. New York duo Lion Babe has released a single off their debut EP that is both sexy and funky. The track incorporates powerful vocals from Jillian Hervey, retro electronic melodies from Lucas Goodman and together with guest vocals from Pharell this track is a flawless piece of groovy perfection.

Even though we haven’t really heard much out of Ian Woods, he’s become one of our favorite acts to follow, primarily because the man knows how to create spectacular music. At just over 4 minutes, Woods’ video for "Fiend" will blow your mind. I was amazed at how entertaining the visuals were and how well they went with lyrics of the song. If you dig what you see above, share it with everyone because the man deserves more than 85 YouTube plays.

Migos and Rich the Kid take iLoveMakonnen’s ‘Whip It” from bland to fire. It’s explosive, it has life, it makes me want to light up and whip it all day everyday. It’s a badass heavy hitter, trust me you’re going to love it. This remix has #winning written all over it.

Los Angeles indie artist SIVIK just made pop sound a whole lot sexier with high sound levels of chill. "High" is one of the best pop songs of the year. Prior to creating beautiful gems, SIVIK was out creating music with various bands one of them being Hot Chelle Rae, but has since then ventured out into a solo career that to us sounds promising. You should head over to his Soundcloud page and keep a close eye on his next move.

London producer Mat Zo has a bunch of incredible remixes. If you haven’t heard them, “Bug A Boo” is not a bad place to start. He simply creates crazy next level music. In the case of the bootleg above, it’s bouncy, slick, synthetic enough to the point that even Beyonce herself would approve of. Mat’s so awesome that he’s made this track available to download for free.

This is one of those songs that has everyone bouncing. Vanic has teamed up with Swedish pop artist Tove Styrke and has given her track “Borderline” the full Vanic treatment. He’s infused the single with a made for club groove. Take a break from whatever shit you have going on right now and let yourself kickback to this ear melting production.

Thanks for tuning in.