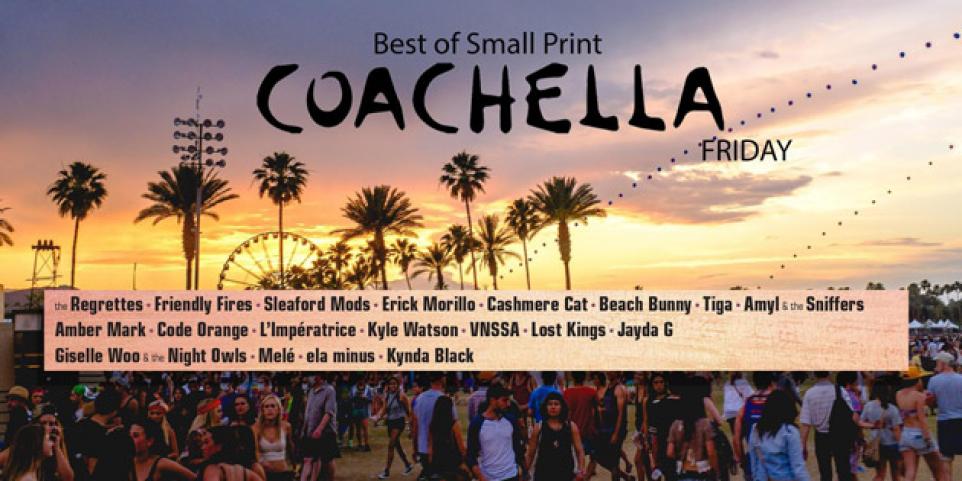 As the olds get pushed out of Coachella’s target demographic they complain about there only being a handful of names that they even know of. “But Rage Against The Machine, '' they say as if they’re not completely irrelevant to ticket sales. The catch is it’s not about the names you know. It’s ALWAYS been about the ones you don’t. Coachella has become my annual time-to-discover new music tradition. I love being surprised by bands, djs, rappers, pop-stars that I’ve never heard of. Sure, we can probably skip Big Sean and Madeon, but what about the rest? What about the names that are so weird they make us scratch our heads.

Old is a choice. Don’t snub your nose at artists that aren’t your exact cup of tea, but instead open yourself to the limitless possibilities (and world-spanning acts) that Coachella offers.  This is why we dig into the artists in the fine print. It’s these fine print acts that always get us the most excited. Buttttt I haven’t heard of them?! Exactly! I also haven’t had fourteen opportunities to see them by this point.

This Friday we’re particularly excited about lady-driven punk rock and house music.  Are there other things on the lineup? Sure!  But we did the digging and these were the standouts.  Now git listening, y’all. Time to get ready for the big show.

It’s simple really.  Make your punk rock sound a little bit like throwback Rock and Roll and you’ll get that whole 50’s aesthetic crowd doo-wopping to your sound like there’s no tomorrow.  There’s something retro about the Regrettes sound, there’s also something 90s (which is a different kind of retro if you think about it--don’t think too hard), and yet there’s also something very modern.  These catchy garage-pop songwriters are LA based, bringing some hometown mood to the festivities. If I wanna bop around and have the time of my life I know this is the set I’ll make sure to be at.  Let’s hope it’s early enough before I wanna start getting weirdddd.

2010 Indietronica making big waves ten years later. A retro dance show without going all the way back to ‘92.  Saw these cats at San Diego’s CRSSD festival this year and they had the energy of a band that’s just starting off, not one on a major revitalization tour with a whole hell of a lot to prove. While sure I could drop their classic hit “Paris” on you, I refuse to make it that easy. Instead, we’ll listen to “Silhouettes,” the lead single off the band’s return to form album Inflorescent. This English three piece band makes for a whole lot of energy live, with lead singer Ed Macfarlane bouncing around the stage (and off it) like some kind of consummate professional. Want to see a band other than Rage Against the Machine that knows how to command the stage? Nowhere better to turn than Friendly Fires

For those who are fans of Slowthai’s (very) british delivery, Sleaford Mods take it one step forward (and slightly to the left). This is spoken-word mod punk electro at its absolute most essential (if not only?). Who would’ve thought that the working class drum-machine sound would have been such a major player on the lineup? It think that’s what makes Sleaford Mods so special-- there really ain’t anything else like it, not on the lineup, but at all.  “Kebab Spider” is the early days of Coachella in a nutshell. Punk and Electronic-- pushing the boundaries in both directions at the same time.  Can’t wait to see what they bring to the one of the tents.

Oh yes. Coachella loves its droney punk rock.  Lo-fi scuzz Cali surfer babe stoned shit, even if Beach Bunny are from Chicago (about as far away from the Ocean as it gets).  “Prom Queen” is deeply relatable in a way that we can’t fully grasp as we didn’t even attend our prom (or is that the point).  Maybe it’s because Coachella is made-up of weirdos and the-never-understood (1:1 with influencers).  This is the remnants of punk rock emo kids who never felt like they had anyone who really ‘got’ them. Coachella gets you.  Beach Bunny gets you. Target demographic acquired right locked in sights set.  Expect the Sonora to get full up for this one.

Tiga is an absolute legend.  Dude has never seemed to give much of a shit what anyone thought about him-- a thing that has ironically (or perhaps not) kept him around for as long as it has.  Tiga has been playing since 2001 after his electro-wave cover of “Sunglasses at Night” hit big, and truth be told his sound hasn’t changed much since then either. “Bugatti,” and it’s stripped down acid-house production / pop stylings is Tiga in a nutshell. BANGING AND BIZARRE. You’re in for a treat. A little acid, techno, electro, maybe even some live vocalization. Tiga has never played by any of the rules so how can we possibly predict what he’s going to bring.

AMYL AND THE SNIFFERS

Australia don’t give a fuck punk rock hell yeah. This feels like a full on experience. A can’t miss live show, raucous party energy, ripping the lid off that tent and pulling the whole festival into a vortex.  I remember way back in 2010 (told you, I’m old) when I saw Johnny Lydon (of the mfing Sex Pistols) take the stage with Public Image Limited. He was pissed because Jay-Z was on the main stage, and was sneering that punk rock sarcasm for the entirety of his set.  I’m not saying lead singer Amy Taylor is the second coming of the Sex Pistols, but--hell, fuck it, maybe I am.  Don’t miss this one if you’re not a coward.

Oh yes yes.  The groove is alive and very very very well. There is funk, there is soul, there is disco and this french six-piece have really assembled some of the sun-shiniest songs on the entire lineup.  This band right here is what these yearly best of the small print articles are all about, because (unfortunately) these cats are going to end up being way too early in the afternoon and you’ll be preoccupied by some more substantial name (mediocre rapper).  Fast forward six months and you’ll look back on the line up and be really angry at yourself for missing the best live disco band working today.  This is the way the festival works. Almost as if they only want the people paying the most attention to have the best time. Could that be you? SHOULD that be you?

Let’s put the two Dirtybird-adjacent artists together. Mostly because they are right next to each other on the poster and also likely on the schedule when that (eventually) comes out. Even though they don’t sound particularly alike, I’m a big old loyalist to the birdhouse (Claude Vonstroke, Walker & Royce, Justin Martin, see where I’m going with this). You can likely expect these two to go back-to-back sets in the Sahara tent and Yuma tent to start your Friday off with a booty shaking bang. Kyle Watson’s got a very specific bass filter on all of his tracks that will be unmistakable from a million miles away. The South African king is some of my favorite people’s favorite producer. My very personal favorite producer right now? That would be VNSSA. Every song is a party in a bottle. Time to unleash her on the polo grounds so she can become the superstar she deserves to be.

Ooohhhkkkkayyyy. I don’t even know to genrefy this, and that fact alone is incredibly exciting. Is it house? Is it pop? Is it neither? Is it something new altogether and why should I bother putting a label on it? With Jayda G on vocals and a minimal beat, underneath, this is house music(?) truly utilizing vocals as part of the track and not just in a way that’s a stupid hook before the bass kicks in. Jayda G is based in Berlin and clearly knows how to get weird with it. I don’t know if this is for everybody or not, but I do know that whoever is in the Yuma tent during this set is really going to get something special. Perhaps, this is where all the cool kids will be.  The award for set most likely to resemble a scene from Party Monster.

If “Pasilda” is any indication,  Melé is about to be the most fun anybody in the world can have in the Yuma (outside of Norman Cook’s Sunday night set obv).  The UK-based tribal house producer is going to turn that air conditioned tent into a veritable world music function. This is something I didn’t know what I was missing until I now all the way know what I’m missing, y’hear? Tribal tech house? Ain’t seen enough of that on this lineup over its 20 year span. On some level this list is exclusively for me, but now you get the benefits of my research and get to do with it what you will. Not a house head? Stay out of the Yuma. Like a little bit of everything? Get in there and shake your member to Melé.

[Image labelled for reuse by Wikimedia]