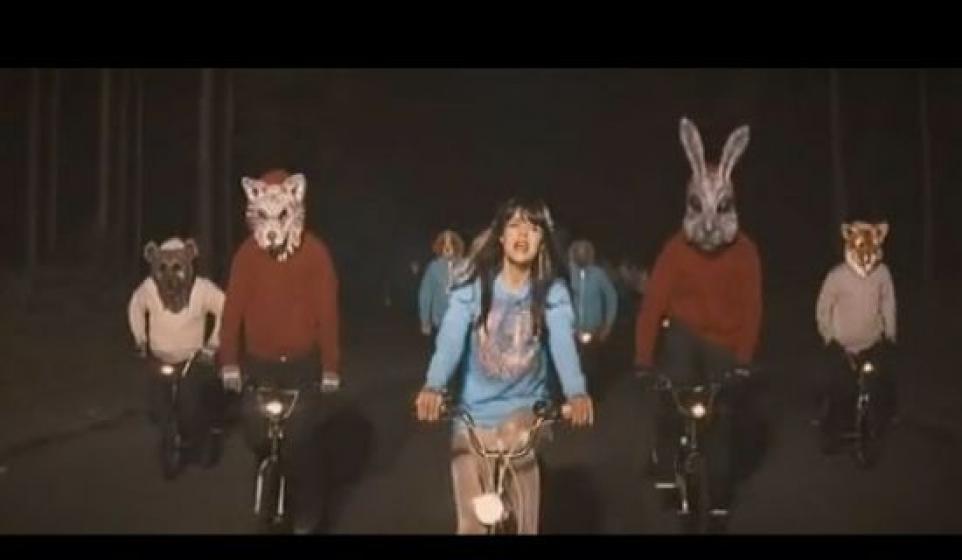 We told y'all via clenched butt cheek groundhog shadow currency in last week's round-up that this year is going to be something fierce the way of top music videos to chew into. We are inundated in week two, from woodland creature bmx troupes to personified lava lamp adventures, with inspiration to make like a confused Drake and get YOLO on YouTube.   And yes, this installment is so sweet...it's sticker than Natasha Kahn's bicycle seat.  Who's coming?

Moral of the story - don't fuck with a dude in a letterman's jacket. Death by varsity 'rari. Ever wonder what happened to Teen Wolf after high school? He became a burnout cop-killer, is what. Miss you 80s.

Kendrick Lamar - "Sing About Me, I'm dying of Thirst"

A peak into the genius behind the Compton beacon of triumph over adversity and the alter-egos and perspectives that go along with the writing of actually progressive hip-hop that isn't contingent on ghetto gang glory. Chief Keef, A$AP Rocky - grow up.

The prince of womp gets sentimental with this montage of youth getting all YOLO lighting each other's hair on fire, while his new girl, Ellie Goulding whirls about with an auto-tune vocal assist. The ladies of his crew of course get plenty of screen time. Lifestyles of the dub and privileged.

Why they didn't cut to shots of the monks who lent them the monastery space, getting their post-rock swarth on, is not cool. Self-righteous punks. Epic natural reverb, though. How many sins do we have to confess before we can play a venue like so?

The McGruff dog had it rough before he starting chomping into crime. At some point in your life, dog brothers and dig sisters, you gotta ditch the ghetto blaster and get a damn job. Broken legs don't help either.

Lit lava lamp, indeed. What drugs were necessary to string this city of Angels fantasy together? We would like to watch this motley crew stumble from possessed book shop to sailboat cruise forever. Hypnotic. Also, that Cosby-faded Hawaiian button-down is fly, fixie-rider, keep on keeping' on.

Ah yes, the illegal worm race circuit, and the twisted glories of worm steroids. If you ever find yourself faced with unexpected outcomes spawned from illegal decisions - next step -> throw shit.

Trinidad James - "All Gold Everything"

So here's what happens when RCA throws ass loads of cash at a rising hip-hop talent and feeds his chest-thumping cred in infinite amounts - models fighting with Donatello sticks and shaky cam effects. Why is there an American flag in there?

A classic.  A girl's to get the fuck out of those woods - you're gonna get taken by the woodland bmx creatures, my dear. Glitter and face paint will not save you. Jesus, we would have been long gone before the monsters in bed sheets let their balloons go.

Yes, you are different my man. Where can we get one of those cheetah-pajama suits? Should we don said cheetah jammies, can we party on that boat that never makes it into the water with you?

Drop The Lime - "No Sleep for the Wicked"

Cheerleaders, man, always putting the hurt on dudes when you least expect it. Where's Buffy when you need her? And why are the football players in cahoots. We smell a series.

Are you still frightened by what that asshole did that doped-up worm? Yeah, us too. Remember, puppies and gold and hoes. It'll make you feel better. Until next week's best new videos, BitCandy munchers...