BEST NEW TRACKS: THE CHEMICAL BROTHERS - GOT TO KEEP ON

Death, taxes, and a new Chemical Brothers LP. These are the three certainties in life.

Last fall the iconic UK electronic duo announced their ninth studio album No Geography and have been building up anticipation by ever so slowly releasing tracks off it into the wild. This week a third such track, "Got to Keep On", was unveiled to the world complete with a music video directed by siblings Michel and Olivier Gondry.

(For the uncultured, Michel is a renowned filmmaker [Eternal Sunshine of the Spotless Mind, The Science of Sleep] while Olivier is known for his visual work with Daft Punk.)

Dubbed by the band as a “surrealist version of Soul Train,” the kinetic and transfixing video for  "Got to Keep On" does not disappoint. Featuring a chorus line of dancers getting down to the beat before mutating into some sort of conglomerate white blob, the video is far better to watch than reading descriptions of.

As for the song itself, it’s a funky, disco-inspired number that features all the bells and whistles we’ve come to expect from the Manchester duo. If you’ve liked previous Chemical Brothers songs, you’ll probably like this one too.

And even if you don’t care for their style of music, check out the video anyways because the Gondrys are better at this shit than everyone else (with apologies to Spike Jonze).

THE CHEMICAL BROTHERS - GOT TO KEEP ON

No Geography out April 12th via Astralwerks. All three songs we’ve already heard from the record immediately become yours if you pre-order it.

And yes, the Chemical Brothers will be making a pitstop in North America after it’s release.

We’ll leave you with the artwork and tracklist for No Geography. (Crossing my fingers that the opening cut is a Barry Mcguire cover.) 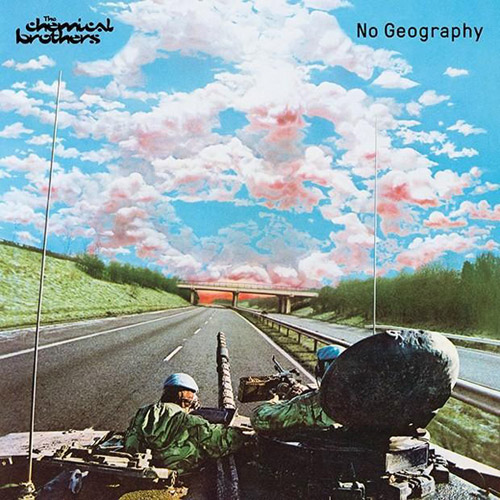