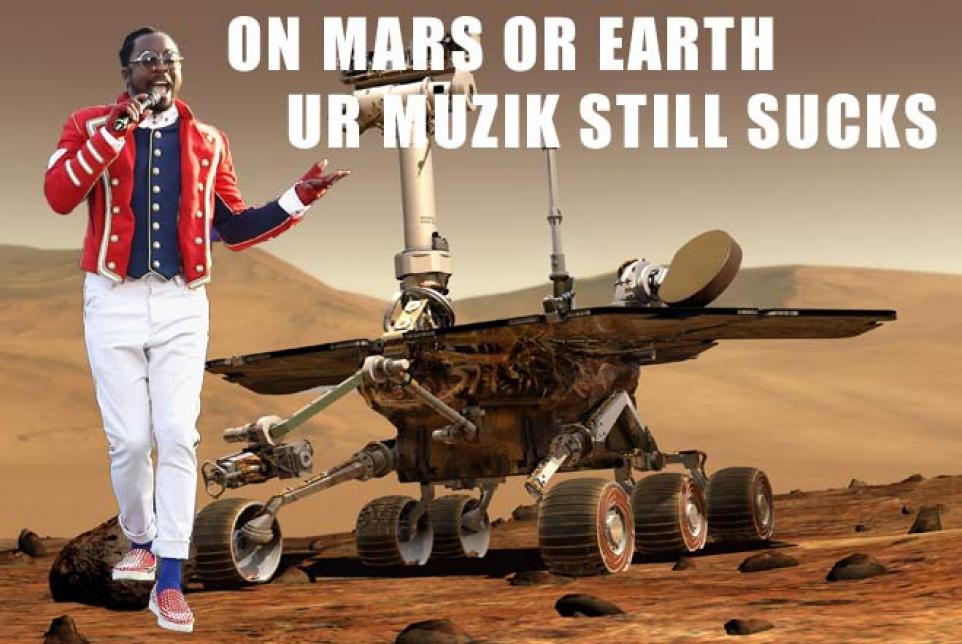 Hi, I’m the Mars Rover and I’m the guest blogger for this week’s Best of Alternative Pop post of 10 cool pop songs that don’t suck lint.   Actually this isn’t what I’m here for.  I’m here for a cry for help.  You see...NASA is going to make me broadcast Will.I.Am’s terrible new song “Reach for the Stars” on Mars.

This is not fucking what me, the awesome Mars Rover was made for.  What the fuck?!   Please I need one of you to send this self destruct code from earth.   It should take about 15 minutes to reach me.  The code is ZBEDD333-D1ZZZZZZ.   I’m so bummed.  But here’s a joke to keep me lighthearted.  Question: What doesn’t change about Will.I.Am’s song being played on Earth or on Mars.  Answer:  Still no one hears (or likes) it.

With that in mind here the top pop songs (this is OUR definition of pop!!) and you can have your guilty pleasures without the guilt.

I thought this was some Justin Timberlake side project...rumour is it’s that almost one hit wonder Christian TV.  Up for 2nd bat.  The project is JMSN or pronounced Jameson.

This looks like it’s going to be an amazing video involving UFC MMA shit.  Awesome.   By the time this post goes up there will be a full version up and I’ll look to post it ASAP.

One of my favorite songs coming on the new Martin Solveig album (featuring that “junk in the trunk favorite bitch, Dev)

For those of you who are fans Grouplove meets Naked and Famous (with a hot chick drummer)...you need to know about Youngblood Hawke.   Here’s a lyric video for your sweet ass.  (I know you got a sweet ass I’ve peaked at ya through your Mac Facetime...not really).  EP you can stream here.  http://soundcloud.com/youngbloodhawke/sets

Some people would say this is a dance track.  For us...this is what pop radio should be playing in the U.S.  Well...at least this is the kind of pop we play on our PopKiller radio station.  Screw the Top 40 crap!!!   You can ditch your local FM and listen to the best internet radio right here on BitCandy!

DEV - In My Trunk

We highlighted this song way back in early April, as a likely single and one of the best on Dev’s worst recent album releases.   Check out our review of the song here where we thought she was saying “I got that Dump / It’s In My Trunk.”   We also postulated she got her haircut for the album photo from Kid N Play.    Well it looks like it’s the next single and getting radio ads … Well, this video is more for comic relief especially if you like “Repo Man” (I guarantee in that movie it wasn’t fucking Dev).

Did I tell you I liked Mashups?   Check out our latest Best of Mashups post (free downloads, Yo!) right thurr...or I mean here.

We’re only going to say one thing.  The best part of the video is at .20 seconds when you get a nice shot of this chick’s ass.  Otherwise we hate the song...in fact Kurt Cobain is rolling over in his grave if they think they can get away with this sample!  Read our story on the drama here.  Karmin, please go back to making covers.

Decided to close out the post with a class song and video from Janet Jackson.  This amazing concept album “Rhythm Nation 1814” and came out in 1989 and was a continued collaboration between Janet and Jimmy Jam and Terry Lewis.  Well played sir.  Well played.

So that’s the post.  Did you send the self destruct code.  PLEASE...Will.I.Am is teleporting here any moment...wait i have an incoming message...Yes it’s the code...THANK Y--------  (explosion noise in a vacuum).