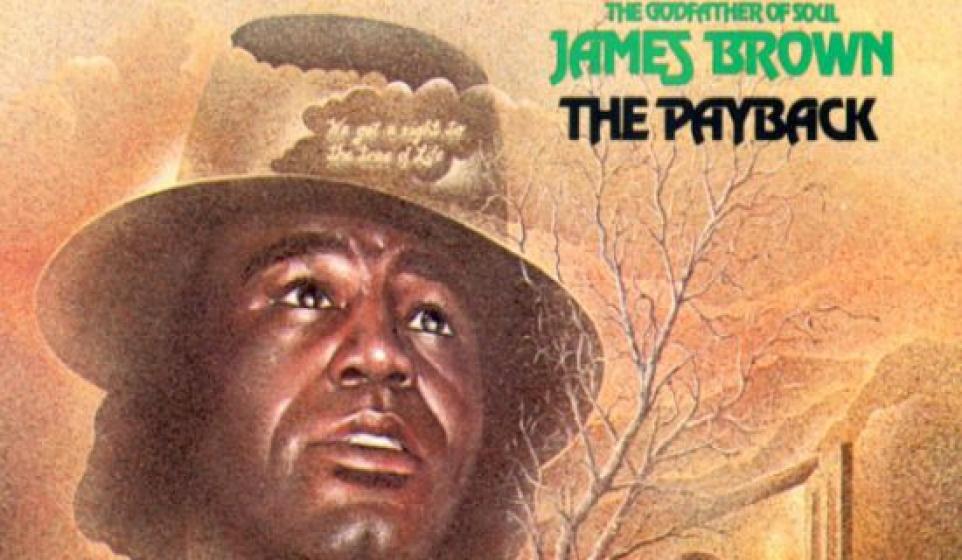 Best Songs Ever: 'The Payback [Live in Zaire]'

In September 1974, James Brown headlined Zaire 74, a three day music festival in Kinshasa, Zaire, now the Democratic Republic of the Congo, held to simultaneously promote The Rumble in the Jungle, the historic boxing match between Muhammad Ali and George Foreman, and racial and cultural solidarity. Livers were quivered, bladders were splattered and knees were freezed when The Godfather of Soul arrived on stage to today's Best Songs Ever, “The Payback.” Where oh where has this kind of energy in live music gone?  (besides Prince ripping of JB).  Watch and learn, kids, watch and learn:

"The Payback" is lifted from Brown's double album of the same name. Released in 1973, it intended to serve as the soundtrack to the blaxploitation film, Hell Up in Harlem, but the album was rejected by the producers, who dismissed it as "the same old James Brown stuff." Not groovy! The title track, a bad fucking ass tale of betrayal and revenge deluged in funky wah wah, peaked at #26 on the Hot 100. It was also a #1 hit on the R&B chart. “The Payback” was Brown's final single to be certified gold by the Recording Industry Association of America (RIAA):

En Vogue (“Hold On,” 1990, “My Lovin' (You're Never Gonna Get It),” 1992), LL Cool J (“The Boomin' System,” 1990), Massive Attack ("Protection," 1995), and Mary J. Blige (“Everything,” 1997) are just some of the artists who sampled “The Payback” in the 90s, when it was the trend du jour. It has since featured in the video game, Grand Theft Auto: San Andreas, the television shows, The Wire and Everybody Hates Chris, and the films, Lock, Stock, and Two Smoking Barrels and Poolhall Junkies. Most recently, “The Payback” was remixed alongside 2Pac's “Untouchable” for Quentin Tarantino's Django Unchained:

Get down with my girlfriend, That ain't right!!
Hollarin' cussin', you wanna fight
Payback is a thing you gotta see
Brother do any damn thing to me

Sold me out, for chump change (yes you did!!)
Told me that they, they had it all arranged
You handed me down, and thats a fact
Now you're pumped, You gotta get ready For the big payback!! (the big
payback!!)
That's where I am, the big payback (the big payback!!)
I can do wheelin', I can do dealin' (yes you can!!) But I don't do no damn
squealin'
I can dig rappin', I'm ready!! I can dig scrappin'
But I can't dig that backstabbin' (Oh No!!)

The brother get ready!! Thats a fact!!
Get ready you Mother, for the big payback (The big Payback!!)
Let me hit 'em hit'em!! Hey Hey!! WOOOOOOOOOOOO!

Took my money, you got my honey
Don't want me to see what you doing to me
I got to get back I gotta deal with you!! (4xs) Hey let me tell ya!!
Get down with my woman, that ain't right! You hollarin' and cussin', you wanna
fight!!
Don't do me no darn favor,
I don't know karate, but I know KA-RAZY!!!! (yes we do!!)