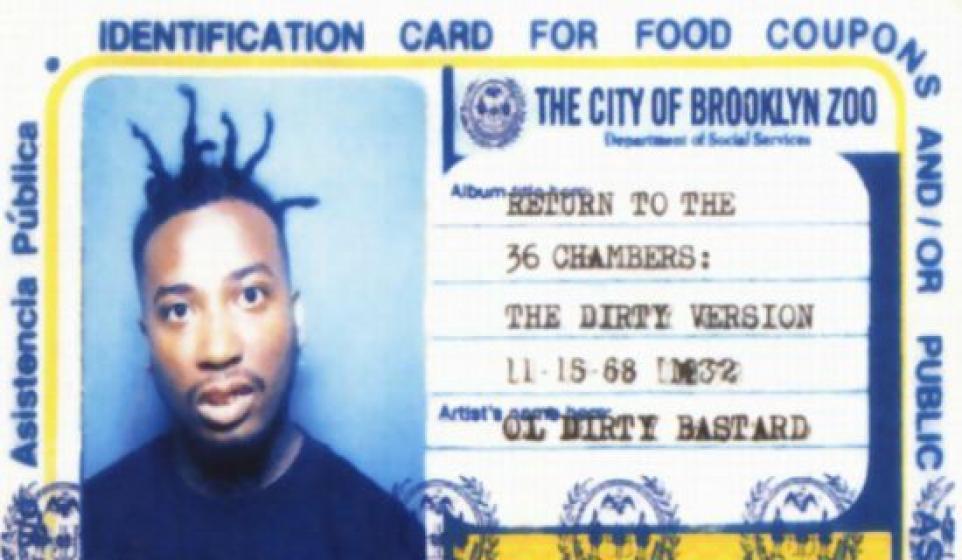 Following the critical and commercial success of Enter the Wu-Tang, Clan co-founder and loose-cannon, Ol' Dirty Bastard, pursued a solo career. In 1995, he dropped his debut album, the ground-breaking Return to the 36 Chambers: The Dirty Version, and so begot today's double Best Songs Ever spectacular - “Brooklyn Zoo”:

and “Shimmy Shimmy Ya”:

“Brooklyn Zoo” and “Shimmy Shimmy Ya” propelled Return to the 36 Chambers to platinum status, peaking at #54 and #62 respectively. The singles introduced rap to Dirt McGirt's loose and occasionally absurd delivery, and RZA's “Ooh baby, I like it raw” production – a soundscape which influences hip-hop and beyond to this very day.

“Brooklyn Zoo” came accompanied by two music videos - the one which you have all seen, featuring Ol' Dirty Bastard and Wu-Tang Clan loitering in the corridor of a dead-beat apartment, and a second, starring ODB, aka “Pimp Daddy,” in a faux-gangster flick. This latter version was banned by most tube channels, due to the mass shooting that breaks out at the climax of the video:

The music video for "Shimmy Shimmy Ya" is a lil' more humorous in nature, featuring Ol' Dirty Bastard and the Wu-Tang crew cutting shapes in a 1970s discotheque. Loiter Squad got shit on this:

Wu-Tang Clan continue to perform a mash-up of today's Best Songs Ever in ode to the late Ol' Dirty Bastard, who died of a drug overdose in 2004. Check out this live footage, shot in Montreux, Switzerland, in 2007. RIP, ODB:

[Intro]
Shit. Word. I bust that nigga ass right now
Ain't none of them niggas can't fuck with me
What? Nigga you could never fuck with me, my nigga
I'll fuck you up right now! What? What? What?
Bust your motherfucking ass boy!
I ain't no motherfucking joke, you know who you talking to?
(Word up, bust that nigga ass, word up)
Ol' Dirty Bastard, I fuck you up right now

[Verse 1]
I'm the one-man army, Ason
I never been tooken out, I keep MCs looking out
I drop science like Cosby dropping babies
Enough to make a nigga go crazy
In the G building, taking all types of medicines
Your ass thought you were better than
Ason, I keep planets in orbit
While I be coming with deeper and more shit
Enough to make you break and shake your ass
As I create rhymes good as a Tastykake makes
This style, I'm mastered in
Niggas catching headaches, what? What? You need Aspirin?
This type of pain, you couldn't even kill with Midol
Fuck around, get sprayed with Lysol
In your face like a can of mace, baby
Is it burning? Well, fuck it, now you're learning
How I don't even like your motherfucking profile
Give me my fucking shit: CH-CH-BLAOW!
Not seen and heard, no-one knows
You forget: niggas be quiet as kept
Now you know nothing
Before you knew a whole fucking lot
Your ass don't wanna get shot
A lot of MCs came to my showdown
And watched me put your fucking ass low down
As you can go, below zero
Without a doubt I never been tooken out
By a nigga, who couldn't figure
Yo by a nigga, who couldn't figure
Yo by a nigga, who couldn't figure (Brooklyn Zoo)
How to pull a fucking gun trigger
I said "Get the fuck outta here!"
Nigga wanna get too close, to the utmost
But I got stacks that'll attack any wack host
Introducing - yo fuck that nigga's name
My Hip Hop drops on your head like rain
And when it rains it pours, cause my rhymes hardcore
That's why I give you more of the raw
Talent that I got will riz-ock the spot
MCs I'll be burning, burning hot
Whoa-hoa-hoa! Let me like slow up with the flow
If I move too quick, oh, you just won't know
I'm homicidal when you enter the target
Nigga get up, act like a pig trying to hog shit
So I take yo ass out quick
The mics, I've had it my nigga, you can suck my dick
If you wanna step to my motherfucking rep
CH-CH-BLOAW! BLOAW! BLOAW! Blown to death
You got shot cause you knock knock knock
"Who's there?" Another motherfucking hardrock
Slacking on your macking cause raw's what you lack
You wanna react? Bring it on back

[Hook]
Shame on you, when you step through to
The Ol' Dirty Bastard, Brooklyn Zoo!
(Repeat x5)

[Verse 1]
Shimmy shimmy ya, shimmy yam, shimmy ya
Gimme the mic so I can take it away
Off on a natural charge, bon-voyage
Yeah from the home of the Dodger Brooklyn squad
Wu-Tang killer bees on a swarm
Rain on your college-ass disco dorm
For you to even touch my skill
You gotta put the one killer bee and he ain't gonna kill
Now chop that down, pass it all around
Lyrics get hard quick cement to the ground
For any emcee in any fifty-two states
I get psycho killer, Norman Bates
My producer slam my flow is like bam
Jump on stage ah then I dip down
I like the way you talk

Yo ya'll know the lyrics come on sing with me