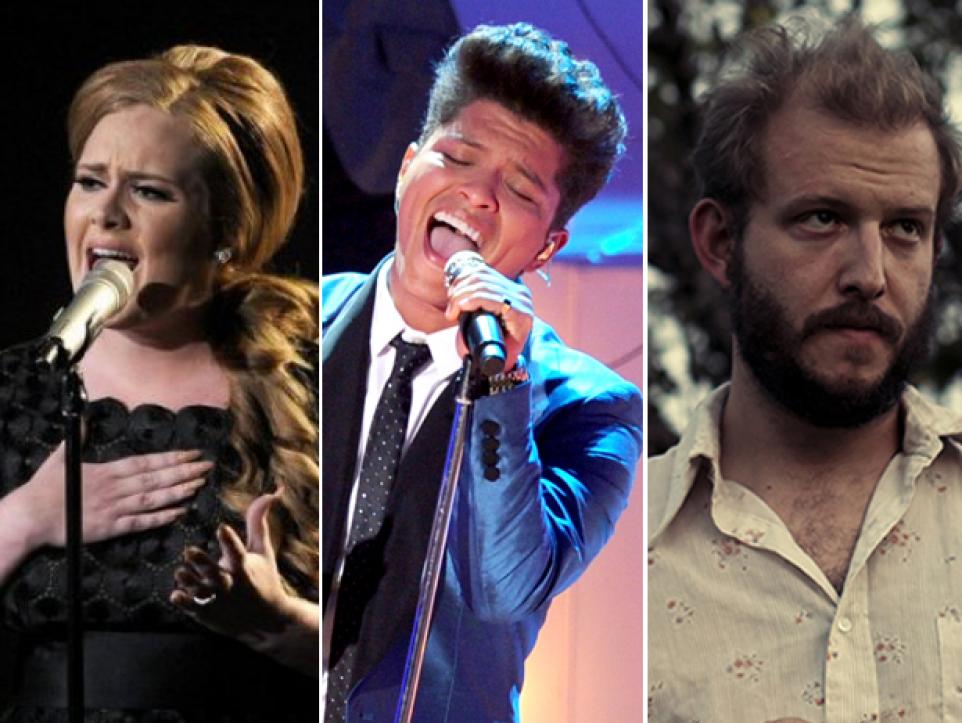 It's Granny...I mean, Grammy time.  Which means it's time to get our smelly BitCandy Editorial Opinion going ... pointing out what MUST be said from another "competent minus" year at the 2012 Grammy's (p.s. we were there).  I know you want it...so here's our summary ... it's not pretty...but oh so fun to read.

Katy Perry: Gets the Grammy for most awkward song transition. Its one thing to make the audience think the power went out and "something went wrong." Its another when we hope the power just stays off.  If you hear a burst of laughter during Katy's performance it was from Lady Gaga in the front row laughing her ass off.   And if you hear a bust of laughter right now...it was me slapping my knee and other body parts that Lady Gaga got COMPLETELY shut out out this year on Grammy wins (thank you Jesus!).  That's a long "walk of shame" back to the limo with your "golden scepter."

Paul McCartney:  introduced as the man with impeccable taste (with LL Cool J forgetting to add *who releases shitty Valentines Day standards albums and sells out).  Is it more possible to sell out?  I don't think so.  What's next: Paul McCartney's Halloween Monster Mash Party Album.  Don't think it's not friggin possible.

Bruno Mars:  you were good.  That breakdown (and James Brown) saved you.

Chris Brown: Gets the Grammy for "best jumping."  Really do we need our artists today to have to resort to gymnastics?  Seriously...what THE FUCK is going on here.  Does this conversation exist somewhere "Oh shit...my song sucks and I'm actually only 10% good as Michael Jackson"  "SNAP!!!  I know...I'll do lots of.. AHH...I got it...JUMPING!"   Fuck you, dude.  Even my sisters and nieces were texting me that Chris Brown sucks dick (his other delicacy of choice...Rihanna's flesh....let's not forget this guy is one step away from Hannibal Lechter 3 years ago.  Chris Brown gets a complete "pass?????")

Glen Campbell: I wish I had Alzheimers too so I could forget this boring performance

Biggest Dougebag Moment of the Night:  Producer Paul Epworth to Adele: - "Adele, I couldn't have done it it without you"

Kelly Clarkson: (Hint: as the duet partner its best not to out sing and crush the featured artist but when you're Kelly Clarkson you can out sing everyone on earth).  Love that sexy mama.  YUM.

Taylor Swift. Does everyone know the song she performed, "Mean" was apparently written about Bob Lefsetz (music critique from the scathing review he wrote on her a few years back)?  Check this link on Bob's Original Post.  (and p.s. FOLLOW BOB LEFSETZ!)

Stevie Wonder - you're the only one who didn't need nor use the tele propmpter.  (I was keeping track).

Missing from Grammy's 2012: anything dangerous. Like Skrillex. Or something like this i.e. Pink taking some major risks 2 years ago and performing some art.  But then again...WTF has the music business become...the bastard child of Cirque Du Soleil?  What's next.  Madonna doing acrobats.  OH shit, I forgot...that already happened a few weeks ago.   Ok...just kill me now.  Everyone's sold their soul to Cirque Du Soleil.

Right on, dude!   I love that he acknowledged that most of the "really good" music would never be recognized at the Granny's....I mean...the Spammy's

Jennifer Hudson - singing Whitney Houston's "I Will Always Love You." Best part of the night.   Should have been followed by a PSA to not mix Xanax and Captain Morgan. (Don't hiss.  I'm serious.   Loads of people are kicking off to not knowing the side effects).

Best Original Moment of the Grammy's: Deadmau5 performing "Raise Your Weapon" cowritten by Skrillex and CC Sheffield.  The visuals and the new Mau5 helmet is...modern art.  Awesome.  I hope it left some 50+ year olds mouths ajar like "Oh dear....WTF is this, honey?!"  I hope that scared some people in suburban USA (HINT: we're coming for you).

Which brings me to the conclusion.

But unfortunately that just never happens and today we leave the edge and unpredictability to Ricky Gervais and the Golden Globes.

The truth is 50% of the Grammy performances were from 2 bit Posers and senior citizens.

At least they recognized Skrilex for 3 Grammy's.  I give them credit there.

Who are today's rock stars?   Not in the music business.

Not by a long shot.