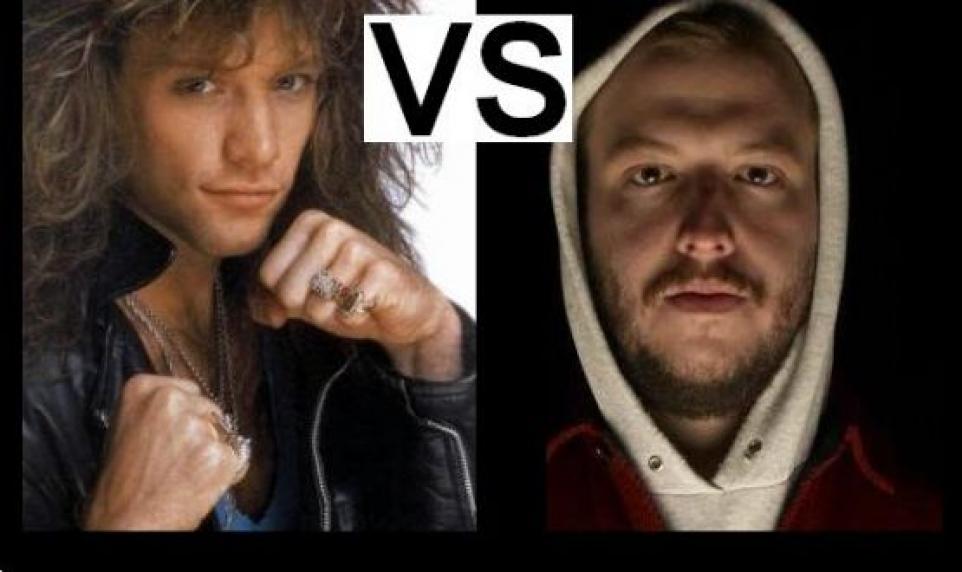 Bon Jovi. Bon Iver.  Do you...like us, have a morbid curiosity about which Bon would win in a cage fight?  We're not sure why... maybe it's because these guys are about as alike as tea lattes and liquid cocaine.  Bon Iver, a.k.a. Justin Vernon, is a modern indie folk star, while Bon Jovi -- the sum of Jon Bon Jovi (born the far less cooler-sounding John Francis Bongiovi), douchebag Richie Sambora, and some other old dudes -- is the epitome of '80s awesome buttrock.  Still, there are some similarities.

There's the fake French-sounding band names, for one.  You could also say that Bon Iver is pop-rock's modern "it-boy," as Jon BJ was in his heyday.  While JV's brand of fame is certainly more understated than JBJ's, don't let Vernon's indie-shy-guy bit fool you: the dude's a rock star.  Bon Iver sells sold-out concert arenas and does collaborations with Kanye West.

It's pretty hard to say who would actually win if they were to duke it out;  Iver has a 20-year age advantage on Jovi, although Jovi's biceps are admittedly impressive.

You can vote at our running poll here on our Facebook page.

But what about a romantic duel?

Middle-aged women do seem to want to fuck Bon Jovi something awful (is it the hair?), but we would think that Bon Iver would have a much easier time sweet-talkin' a lady into bed.  Let's compare some of the Bons' most romantic lyrics:

Bon Iver vs Bon Jovi on making love in a car:

Bon Iver: Then the snow started falling / We were stuck out in your car / ... As a moon waned to crescent We started to kiss ("Blood Bank")

Bon Jovi: Remember when we lost the keys / And you lost more than that in my backseat ("Never Say Goodbye")

Bon Iver: For the love, I'd fallen on / in the swampy August dawn / what a mischief you would bring young darling!  ("Towers")

Bon Jovi: As the words slipped off my tongue, they sounded dumb / If this old heart could talk, it'd say you're the one ("Misunderstood")

When it comes to their respective levels of rock star debauchery, Bon Jovi's probably got Bon Iver beat.  That's not to say that Bon Iver's never gotten any action -- Bon Iver reportedly recorded his first album, "For Emma, Forever Ago" in the woods of Wisconsin while recovering from a bout of mono.  Still, Bon Iver's makeout-session-gone-awry hardly compares to the stories about Bon Jovi alleged in the literary masterpiece "Sex, Drugs and Bon Jovi," a book written by band's former tour manager, Rich Bozzett, that came out last year.

In his book, Bozzett recalls the time when The Jove contracted crabs and pubic lice while on tour in Japan: "Jon has a coat of fur like a goddamned pony and the crabs were everywhere. I brought him to a bunch of local doctors and eventually to a hospital where they actually tried to pull them off individually with tweezers. Jon came running out screaming, 'Let's get out of here.'"

Bon Iver vs. Bon Jovi as measured by other important attributes:

Finally, there's the question of whether/when Bon Iver will do a Bon Jovi cover. He's certainly never shied away from 80s and 90s covers in the past.  In his prettiest falsetto, Bon Iver and his acoustic guitar have covered everyone from Annie Lennox and Bonnie Rait to Peter Gabriel and Tom Petty (DL Bon Iver's surprisingly moving rendition of The Outfield's "Your Love" here).