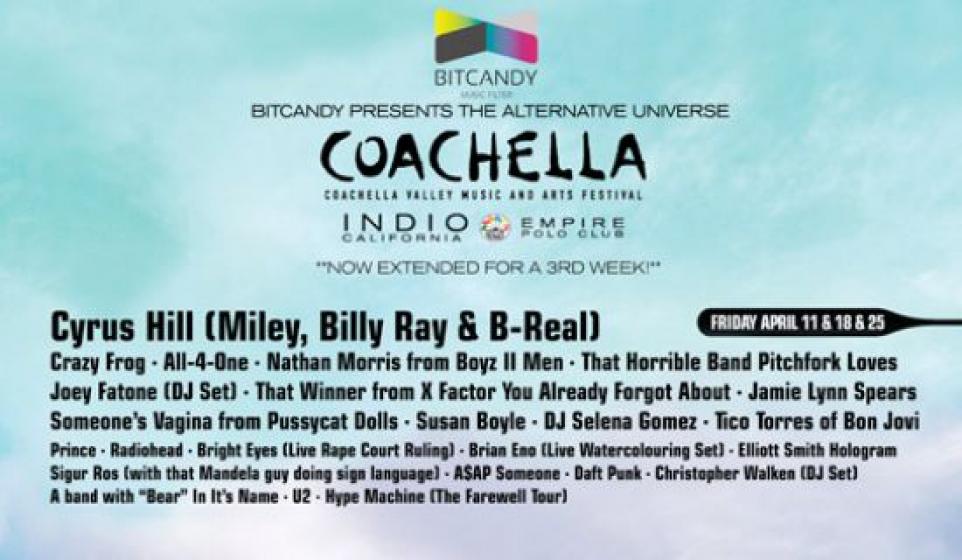 Yes it's time for our 2014 Coachella Parody Poster. And good news for those of you who love to waste your money on idiotic superfluous shit (shamelessly raising my hand). Why have just two fun filled weekends of the Coachella music festival when you can have three? Cater not just to the douchebags rocking the Skrillex haircut and chuggin’ a lukewarm Miller High Life, but also cater to the douchebags who were unable to purchase tickets for the sold out event because they were too busy playing Words With Friends. Coachella is laying your bitching to rest. Bet you didn’t see this coming.

That’s right, we just got confirmation from a source stating that this expansion is something Coachella has been putting off for a very long time, but at the end of the day they have to do what is best for them. Translation: You and You and You GIVE ME YOUR MONEY BIATCHs.

According to the same source, the third weekend of Coachella will be different than what festival goers have been accustomed to.  The lineup will include a shit ton of shitty bands and DJs that A) should have retired prior to releasing a song or B) are worth paying $400 to walk around in hell like temperatures with our teets hanging out in exchange for some FREE Evian water AND Wi-Fi (now you can instagram the shit out y’er iPhone without any delays or interruptions). Yup, yup, Evian and God’s gift Kanye West are pretty happy to be sponsoring acts like: Cyrus Hill, Rebecca Black, Clay Aiken and a lot more names under the headliners that I’m sure I’ve heard people say they make good music: Cyndi Lauper, Willow Smith, half of Milli Vanilli, and Vengaboys to name a few.

Amazingly rare and once in a lifetime shows are a huge surprise, even for people like us. But as far as my personal opinion goes,  I’m not typically one to get excited about music festivals, but I’ll admit I’m looking forward to chugging bottle after bottle of that French Alp water.

To sum it all up for you, this is the “HOLY SHIT” moment everyone has been waiting for. So HAHA in your face to all those who thought it was unreal to expect the lineup to be as good as 2013 or 2010. Coachella seems to be moving in the right direction. Take a look at the complete list of acts below. See you guys there. Oh, and don’t forget to spread the word on our 2014 Coachella Poster by retweeting, sharing or liking it.  (God, that sounds so 2005...but oh well.)

Are you going to Coachella?
Who are you excited to see on the third weekend of Coachella?
Can we be festival buddies and share chapstick?
Am I the only one excited to see a topless Charlie XCX?
Wait...Didn’t Morgan Freeman die last year?