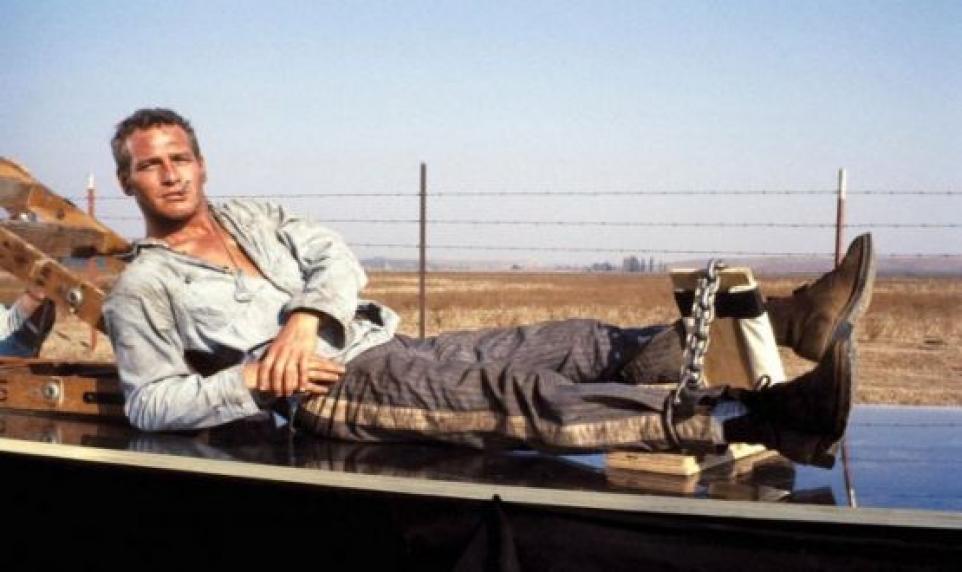 From the opening scene of Paul Newman as a late night drunken mess chopping off parking meters…you’ll be hooked.  (By the way, I so want to take some inspiration from Paul myself on this opening scene.  $54 now for an expired parking meter?  C’mon Los Angeles!!).

Cool Hand Luke directed by Stuart Rosenberg is one of the pioneers in establishing the anti-hero concept which was quite the rage during the ‘riot period’ of the 60s.  Paul Newman’s role perfectly fit into the decade where the rebel is the protagonist versus authority.

In this prison flick, we witness Newman give one of the best performances of his acting career, as a carefree, aimless renegade, who defies the law on a whim. And he does it with uber believability without even saying a thing; just a mere mischievous grin or wink, and he has the audience captivated.

Paul Newman stars in the title role as Luke, an ex war hero and now prisoner in a Georgia Road prison camp who refuses to submit to the system. His inability to conform along with his smart uncompromising toughness among his inmate friends, drives the plot of the movie.
When I say toughness and unique I’m referencing the sparring match with actor George Kennedy in the beginning of the film, where Luke will not ‘stay down’ despite getting beat to a pulp.  Luke ends up winning the match out of the shame to beat a man any further.

This sets the tone of Luke’s mettle as he challenges authority with numerous escape attempts.
My favorite scene is when the chain gang is out tarring a road.  A job that is planned to take all day, though Luke motivates all the inmates to work double time in high gear, finishing the job 3 hours early...letting them do nothing but enjoy a perceived 2 hours of freedom.
Road Tarring Scene. ‘What do we do now?’ Luke: ‘Nothing’

Luke’s anti authority and defiance lends him to be in the same vein as characters such as Winston Smith from Nineteen Eighty-Four, Randle McMurphy from One Flew Over the Cuckoo's Nest, and Jake Holman in The Sand Pebbles.

Throughout numerous prison escape attempts and later being punished and ‘broken’ by the mysterious and ruthless prison guard with the mirror sunglasses, the last 10 minutes of the film are both unexpected, shocking and thrilling with the famous line ‘What we have here is a failure to communicate.’’
A certified timeless classic, Cool Hand Luke is smartly hilarious, poignant, anti authority, and somewhat inspirational in terms of what the human spirit is capable of, especially in moments of oppression. If you liked The Shawshank Redemption, you’ll definitely be in to Cool Hand Luke.