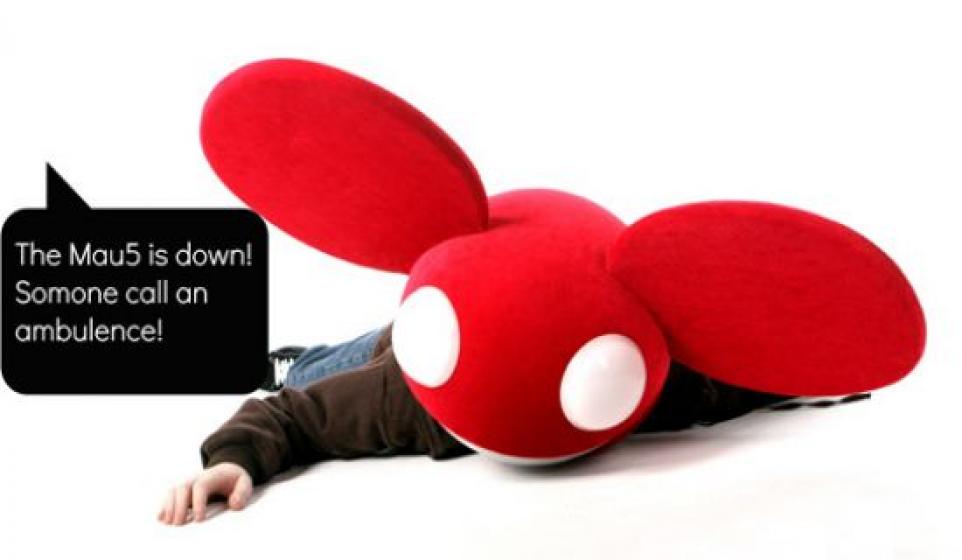 Embattled plushie Deadmau5 is in the news again, and this time it seems serious, or at least as serious as the trials and tribulations of a grown man who consistently wears the head of a dead cartoon mouse as a job can be. According to his management, who released a statement on Monday, the head in question was precisely the problem.

Since Deadmau5 announced to the world, which was rabid with anticipation, the location of his special New Year’s Eve mega-set (it will be in Nassau, NY), rumors have abounded as to the human spectacle’s whereabouts and erratic behavior. One of these was confirmed by his management in their press statement: Deadmau5 has refused to remove his Mau5head until this historic show, when he would reveal his mere mortal and most likely unimpressive man-head to the world.

The stunt seemed ill-advised from the start. Those of us old enough or up on their music trivia may recall in the late 70s when fans were clamoring for rock super-queens Kiss to remove their makeup and do a show en plaine aire, if you will. The world was horrified when the makeup came off, and fans actually begged Gene Simmons and Paul Stanley to cover that shit back up. The damage was done, however, and rock culture would never be the same. Ever heard the old saying, “those who don’t learn from history are doomed to repeat it,” Deadmau5? Apparently not.

Before a Kiss-esque disaster could destroy what is left of EDM, Deadmau5’s press team revealed that something even worse has happened: constant donning of the huge felt head, according to doctors, has led to an acute staph infection which almost claimed the life of Mr. Mau5. He was determined to stick it out for better or worse, but doctors say the infection began quite early in his almost month-long head stint; probably shortly after he announced the stunt at the HARD: Day of the Dead festival in Los Angeles.

Rumor mills are saying that the rekindling of his romance with inked hobag, Kat Von D, may have incubated the virus. While this remains unsubstantiated, reports coming in this week are saying that medical staff had to cut the famous head off of Deadmau5, amidst his gargling protests as he choked on the rotten food and molly trapped inside. “It was touch-and-go for a while for the whole ward. Not only did we have to quarantine due to the scope of the infection, but the smell when we opened the head landed many of the staff in ICU for days,” said an Orderly at the hospital, name undisclosed.

This year has been rough for Deadmau5, with his very public break from the illustrious Ms. Von D, as well as a number of technical problems at his trippy and unnecessary shows. Most recently, the doomed Deadmau5’s entire digital set went Matrix-green for almost a half an hour at the same HARDfest event where he announced his little head-trick. Tragic foreshadowing? Maybe, but the brave plushophile is soldiering on, and is said to be stable and back in the head. So far, no announcements have been made about the cancellation of the New York show, so here’s hoping, EDM fans. Here’s hoping.

This is a fake news story brought to you by the BitCandy paparazzo.