Between 2012 and 2015 the Lawrence brothers released a slew of hits so inescapable that many (myself included) swore they’d be ‘just fine’ never hearing “Latch,” “White Noise,” or “When A Fire Starts To Burn” ever again. If you were NOT one of the many superfans turned haters-- then good on you-- you’re a stronger person than I. While Disclosure have granted us mere listeners with some of the most undeniable songs of the past decade, they were also largely (and problematically) some of the most overplayed tracks to ever exist in the history of music. At a certain point, just even hearing them became hackneyed unto itself.

Let’s fast-forward over Caracal, which never quite hit the highs of Settle and largely suffered from the classic sophomore slump situation, and past the duo’s more recent year-long hiatus that had the 24 and 27 year-olds, Guy and Howard, off to rediscover what their permanent place in dance music would, could, and should be.

Three months ago Disclosure quietly dropped “Ultimatum” to surprisingly little fanfare. Surprising, mostly considering that their last release was the most heralded thing this side of a new Game of Thrones season. We didn’t even cover it here at We Are: The Guard. WTF? Shame. *Bell Rings* Shame. *Bell Rings*

The single, featuring Malian singer/songwriter Fatoumata Diawara stands up alongside the band’s greatest hits, combining world and house music into something so special that it could only come from Disclosure. They aren’t relying on any superstar parlor tricks, but are rather going back to the well of what makes dance music so great-- bringing new, fresh sounds to dance floors around the world.

While I didn’t hear this song out too much, or even see it shared many places, I did see a number of producers coming out of the woodwork with remixes to make this even more playable for their sets at clubs, warehouses and festivals. Most notably is Ocean Roulette’s housier version, that would and will destroy just about any dance floor it were to be set loose on.

Disclosure weren’t about to release just one track and go back to hibernating. Like, that’s it! Thanks for listening. No, no way. The following tweet released the day before “Ultimatum” was a major tell-tale sign that they were back for good and this was just the beginning of a massive rollout. 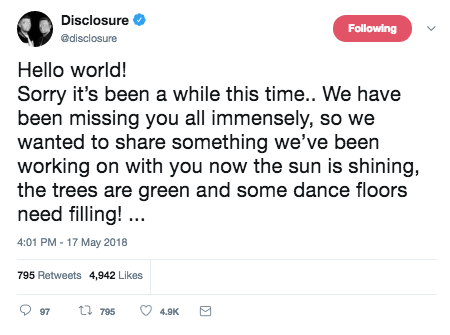 And just to prove that point, this week Disclosure came back with two new songs that are following on the same path to greatness.

“Moonlight” is just about the vibiest track I’ve heard all year. I could listen to this one ten million times and never get sick of it (here’s hoping). A friend, on our private music sharing group, describes it, saying, “this thing is so well produced, it’s like the track is breathing.” This is a beautiful, restrained tune that should put as big of a smile on your face as it does a pep in your step. It’s a simple two-step beat with a chopped and screwed vocal modulation for the synthline. This is classic Disclosure B-Side Material, but I’ve always been fonder of their B-Sides.

WHERE ANGELS FEAR TO TREAD

On this one, Disclosure sample the classic Four Freshman track “Fools Rush In.” They cite acapella jazz groups as a major influence and end up turning this muted jazz vocal into a funky throwback house banger. This blend of old and new isn’t a guaranteed hit like it was with “When A Fire Starts To Burn,” but it’s so smooth and true that I think it’s going to become its own sort of classic in a way we can’t even comprehend yet. Maybe Disclosure will herald in a whole new movement of Jazz-House? Why the hell not?

These guys seem like they are just playing with new ideas and having a hell of a time doing it. Turns out there are more incoming as well! The duo have teased “Love Can Be So Hard” to drop next. Can’t wait for the full album to drop!

What I think made Settle so successful was they didn’t make these tracks for anyone but themselves. This was just two brothers fooling around in their bedroom, making garage tunes that they thought might just make the world happy. With Caracal, it seemed like they were trying to write songs that would be just as massive and groundbreaking as the ones on their first record. Even though it certainly passes, Caracal was unable to bottle the lightning that was their first release. While the record features a who’s-who of who was hot right-then with guests vocals from Sam Smith, Lorde, Gregory Porter, Lion Babe, Kwabs, The Weeknd, Nao, and Miguel, there was no single that was anywhere near as excellent as anything on the first record. It seems like they’re going back to their basics with this one.

What these three new songs sound like to us is music made without intention of charting, hits or singles. This is music made with the raw honesty of people that can’t do anything but. This is so much closer to the promise that Disclosure seemed to give with the first record-- before they became the biggest electronic act in the Universe and had to try and capitalize on that.

Disclosure were always vibers. Why did we try and make them hitmakers? This is music that fits better at a pool party or warehouse than headlining a festival. There is a different place for Disclosure than the world demanded: and that place is right here, doing whatever the hell they’re doing right now. Cause I’m loving it and and hope you are too.

Just one more favor guys, cut out the live shows and start DJing. These are DJ tools and you are excellent DJs. Use them for all they are worth please. Let’s fill those dance floors again!