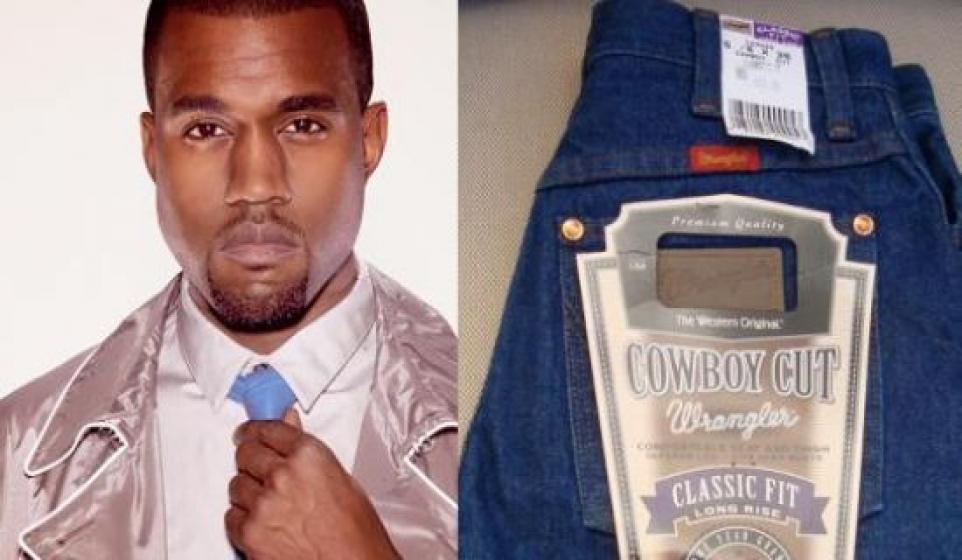 After recently and rightly declaring himself “The Best American Rock Star,” Kanye West has made the newest in a series of extremely savvy and not at all insane moves by signing a massive endorsement deal with Wrangler Jeans Corporation.

After the burden of having to name the Best American Rock Star has been lifted by this benevolent Rock God (oh, the years of struggle: Springstein? Hendrix? Cooper? Cobain? Kanye! Of course! It’s been staring us in the face all along!), the music community can finally get down to the dark task of tackling and then controlling and maintaining the Miley Cyrus/Juicy Juice alliance, and Kanye can turn his focus back to wacky endorsement deals and Armenian-hybrid baby names. This title was an organizational move more than anything, and we at BitCandy would like to thank Kanye West on behalf of the music community at large for setting us straight.  Now we can get back to business.

This first endorsement deal that Kanye signed was also a tactical move. A quick interview with West last month revealed to BitCandy that the Best American Rock Star has been studying under the Charlie Sheen School of Entertainment Management. “I went into a session with Charlie after my little money maker was born, and I was so proud of naming her the best American wind direction, but I really didn’t know where to go next. I felt a little stuck,” admitted West. “So I was sitting there with Charlie, and we were just staring at each other. Man, it was intense! I could feel all that Tiger Blood power just transferring right to me, but I was still so confused about my next step. Then Charlie leaned in really close to me – our underbites were almost touching – and he said ‘Kanye, Gucci is played out. You’re the Best American Rock Star. You don’t need to worry about projecting an upscale image anymore. You’ve nailed down a Kardashian for Christ’s sake!’ ‘But Charlie,’ I said, ‘What should I do instead? Gucci is my biggest endorsement.’ He leaned back in his chair, and pointed straight at me. Barely whispering, he said ‘How the West was WINNING.’ That was all I needed. That is why Charlie is my Guru.”

So, how does the West win? With the ingenious guidance of the Sheen School’s namesake, the answer was clear to Kanye: the West was won by blue jeans, specifically Wrangler. “My name is West, I live in the West; it was just obvious!” Kanye told us.  With the deal signed, West will start shooting Wrangler commercials by the end of the year, with a massive farm tour beginning in Arkansas in early 2013. “What could go wrong?” said West. “Everyone loves Wranglers, and everyone loves me. I’m looking forward to bringing the Best American Rock to a whole new demo, so that West will win the West!”

Marketing Directors for Wrangler are also excited about the deal. In a statement released last week, Wrangler said, “Having Mr. West endorse our brand will help make Wrangler a hip name, recognized by the Hip Hop community and the blacks at large. We want to be the Apple Bottoms of Wal-Mart!” When asked about the fact that Wrangler Jeans do everything they can to flatten the posterior, Wrangler offered no comment.

So, what’s next for this genius of self-branding as he heroically reinvents reality under the tutelage of Career Master Charlie Sheen? Rumors have been circulating that he’s now turning his attention to deals for his newborn daughter, and that he’s in talks with Seattle’s Best coffee, keeping with his direction-based endorsement theme. “Seattle – what’s more North West than that?” West said coyly to a paparazzo outside of his new favorite hangout, The Saddle Ranch. You’re a crafty one, Kanye. No wonder you’re the Best American Rock Star. We can’t wait to see what this Music Mogul will do next!