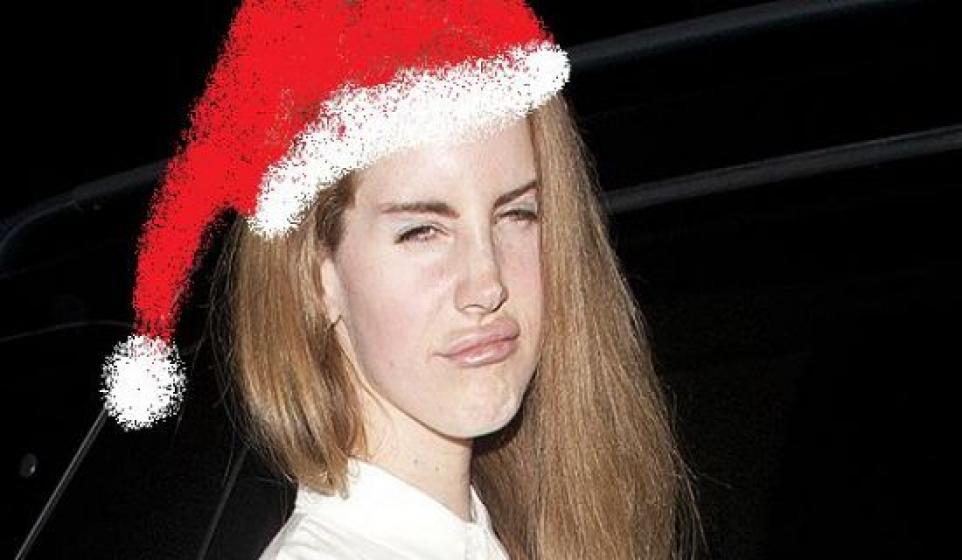 This is Santa Claus and I'm in DEEP SHIT! I thought I had finished Christmas shopping. But then I remembered. CRAP! I haven't bought Lana Del Rey anything! I'd better get her SOMETHING in return for all those blowies she gave me in 2k12. But what do you buy a girl who has everything (well, apart from a good voice, that is)? Fuck knows! So that is why I got BitCandy to ask you geniuses over at Facebook (this week's Poll: What's Azealia Banks' New Years Resolution?")

Dancho Velasco suggested I bring Lana a pair of “blue jeans.” C'mon, Dancho - you should know by now that Liz don't wear no jeans when she sits on old mens' laps like mine:

Karla Ivonne Garcia Torres and four others said I should invest in some “more haters” for Lana. No sweat - though I may have difficulty finding her “more lovers,” as recommended by Bruno Parkour and ten others.

Oscar Luna and six others thought LDR would love some “vaginal weights.” Well, I admit, all that “just riding” isn't doing her vadge ANY favors:

Kevin Guadalupe and twelve others voted for “more lip filler/botox.” If you say so...:

But with an overwhelming 127 VOTES...it looks like Lana D could be getting a “pussy that tastes like Pepsi Cola” for Christmas! Now I'll drink to that...:

There are still a few hours to go until I deliver Lana Del Rey's Christmas gift, so if you have any last minute suggestions, let old Santa know over at Facebook! And feel free to give BitCandy a “like” while you're at it – it's Christmas for goodness sake!

Don't worry.  We actually love some of Lana's songs, so look out for our Best Song of 2012 Post "Video Games."  So there.