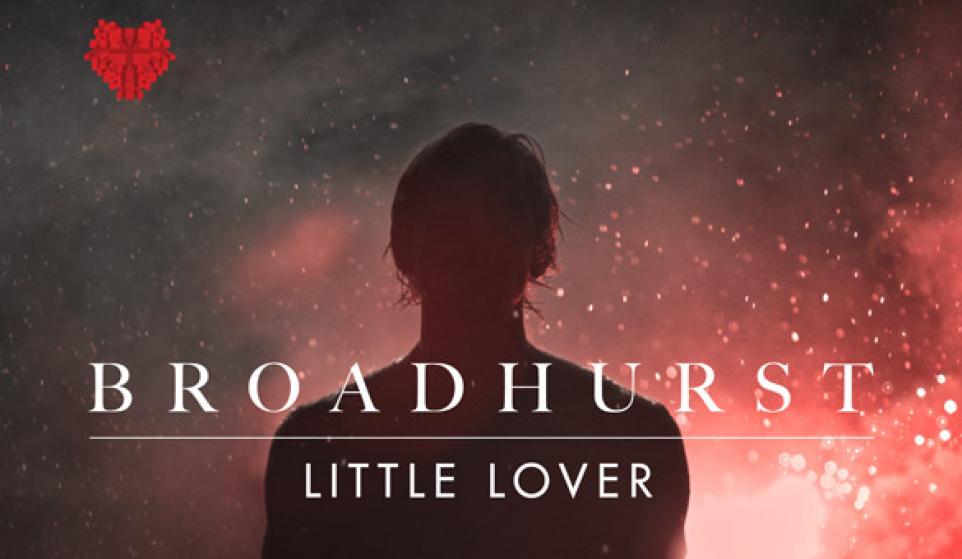 Nick Broadhurst rose to the top of the Australian music charts early on in his musical career with multi-platinum group Sneaky Sound System. Since leaving the band, Nick started to walk the steps of a more truthful existence and live life with meaning. It was through this “discovery” phase that he established his sound and his new moniker: BROADHURST—today marks his debut as a solo performer and the release of his first single which we are excited to share with you: "Little Lover."

There is no stronger debut presence than that of "Little Lover." “It’s a song about sex and love,” BROADHURST tells us during an interview. “I was coming out of a short but spiritually intense relationship and imagining what it would be like to have a lover that truly 'sees' you.”

While most readers are new to BROADHURST’s sound, it’s guaranteed that his style will win you over as he did with us. Enjoy the flawless track below and get ready to feel emotions that you’ve never felt before.

Listeners and fans can expect more gorgeous tracks from the artist in the upcoming months, as well as a beautiful video for “Little Lover.” Until then we’ll leave you guys with the scoop on BROADHURST.

Growing up: As a 10 year old I used to sneak a cassette player under my blankets at night to muffle the sound, so I could stay up listening to jazz and big bands without waking my parents. As a sax player from the age of 10, I was fascinated by their ability to improvise. Musicians like Charlie Parker and bands like the Glenn Miller Orchestra in many ways seemed to be from another planet. This early fascination led me down a path of playing with various small and big jazz and funk bands through high school which allowed me to hone my craft as an improviser to the point where it just became automatic, like the instrument was an extension of my body. I then moved into playing drums, trumpet, flute and various other instruments. It wasn't until the last few years when I started to play around with piano and vocals that I really started to feel at home as an artist.

Thank you Coldplay? James Blake was a revelation to me. I used to listen to him with some envy because I wondered how someone so young could create such a distinct sound and voice. I think Thom Yorke, aside from being my greatest vocal inspiration, has shown me what it means to be a musician. Ásgeir is simply stunning and one of those artists that only Iceland can produce. And last I can't not mention Coldplay; to me they are the height of professionalism. They have paved the way for what is possible.

Lessons of the past: My Sneaky years were a lot of fun. I was at the epicentre of the emergence of a new style of music and fashion culture in Australia. But more than anything it gave me a burning desire to create my own music. I was the youngest in the group and it was never my 'baby'. As much fun as I had, I knew that I had more to say as an artist and needed to take some time out, not only recover from a pretty gruelling period of too many late nights, but to allow that natural passion I had as a child bubble back to the surface. Angus McDonald (aka Black Angus) who was the main brains behind Sneaky showed me the importance of having a strong and clear vision. I think if anything, that was my biggest lesson.

Finding love and himself: Little Lover is a song about sex and love. It was written when I was coming out of a short but spiritually intense relationship and imagining what it would be like to have a lover that truly 'sees' you. It was almost like I could sense this person on the horizon and in some way was calling them in through this song. Just a few months after writing Little Lover I met my wife Melissa and were engaged two weeks later. It was the first song I had written which made me feel like I had found my feet as an artist, so I always knew this would be the perfect song to start with as a representation of my journey as an artist.

In short, he’s the perfect man: The most consistent things I do every day without fail is meditation, yoga, walking and strength training. I also am somewhat of a bookworm and love listening to podcasts. If I wasn't a musician, I would probably just cook all day. There is something magical about creating something beautiful out of simple ingredients. I get a similar feeling when I am cooking to when I am writing music; a sense of being in a state of flow.

More stuff for the fans: During my musical hiatus I watched the industry closely to see what were the emerging trends. I decided that when I launch BROADHURST I would be releasing singles consistently. It's very tempting to be drawn into the way things are done, and I never say never to anything such as EP's or albums, but right now my main focus is creating the best music I can and continuing to release every couple of months or so. I am currently working with musical director Joel Farland on my live show and want to create a live experience which is less about me or my music, and more about taking the listener on their own internal journey. I am also working on a concept which I will launch for free on my site http://broadhurst.world/ which will allow listeners to be taken quickly into a deep meditative state while listening to my music.

If you could eat one person dead or alive who would it be and why (hide yo’ kids): My son Leo. He is just the cutest and most beautiful little thing in the world.

Thank you Nick for your time and beautiful music.

The video for ‘Little Lover’ is out this Friday, November 13th, 2015. For more information about BROADHURST visit: http://broadhurst.world/