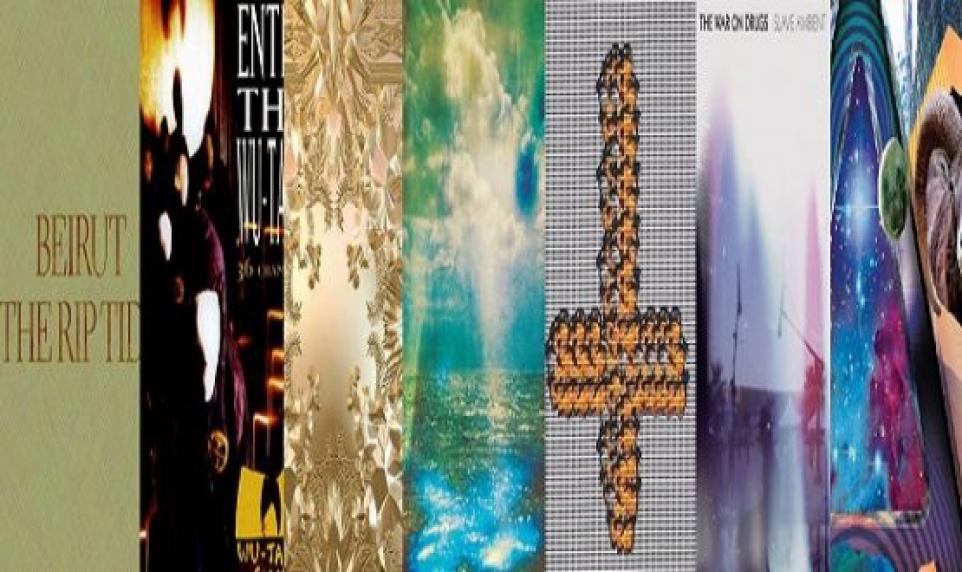 Yes, that's right East Coast Earthquake Survivors, today we return with another jam-packed "Review Roundup" for your consumption. Bursting at the jeans seams with some phenomenal albums (Kanye West and Jay-Z, The War on Drugs and a look back to Wu-Tang Clang), some "good plus" records (Beirut, 311) and a couple of poser LPs, too (The Horrors and Mellowhype), sorry don't hate us.  Actually, please hate us.  If someone doesn't hate us we're not doing something right.  :)

Five years after the debut of "Gulag Orkestar," Beirut (and more specifically songwriter Zach Condon) is still crafting pretty, sweeping, acoustic pub singalongs for you to listen to online at work while imaging a better life for yourself (possibly in some Eastern European city) (read more...).

Throughout "36 Chambers," there's a real sense of comradery, fluidity and focus: this group of NYC nobodies really did believe they were doing something special, and they were: heady, metaphor-rich lyrics from MCs obsessed with Kung Fu movies on top of grimy, pulpy beats (read more...).

K&J are just doing everything right.  There's a real aesthetic here... it's smart, it's classic and provoking... and provides fans with even more ammunition to love them even more.  How's that?  Because Kanye and Jay-Z (say what you want about Kanye) but they respect their listeners and know what we exactly want.  And we want the high brow stuff (read more...).

It's not that I want to dis this band... but guess what... they showed up with a highly mediocre album that everyone is jerking them off on... and thus they're here for the dissing (read more...).

MellowHype is an Odd Future offshoot, featuring members Hodgy Beats and Left Brain. Originally released for free on the OF Tumblr in 2010, "BlackenedWhite" has since gotten a sonic revamp from label Fat Possum and sounds insanely better than the original. Left Brain's production shines on cuts like "Brain" and "Loaded." Yet while Hodgy is a fine rapper, he doesn't specialize in very memorable verses: "This track is peanut butter, so we jam right here" (read more...).

Just before the end-of-summer hangover sets in, The War on Drugs delivers an album to help nurse you through your seasonal morning after. "Slave Ambient" is an airy, fluid, and inspired collection of spacey folk rock (read more...).

Look, I'm not going to bullshit you. This new 311 album, "Universal Pulse," isn't the best thing you've heard all year. (It may not even be the best thing you've listened to online today.) What's surprising, though, is how 311 have actually created a listenable, cohesive album in 2011 (read more...).

And that's a rap on today's "Review Roundup." Say, why not leave a comment below with your thoughts?