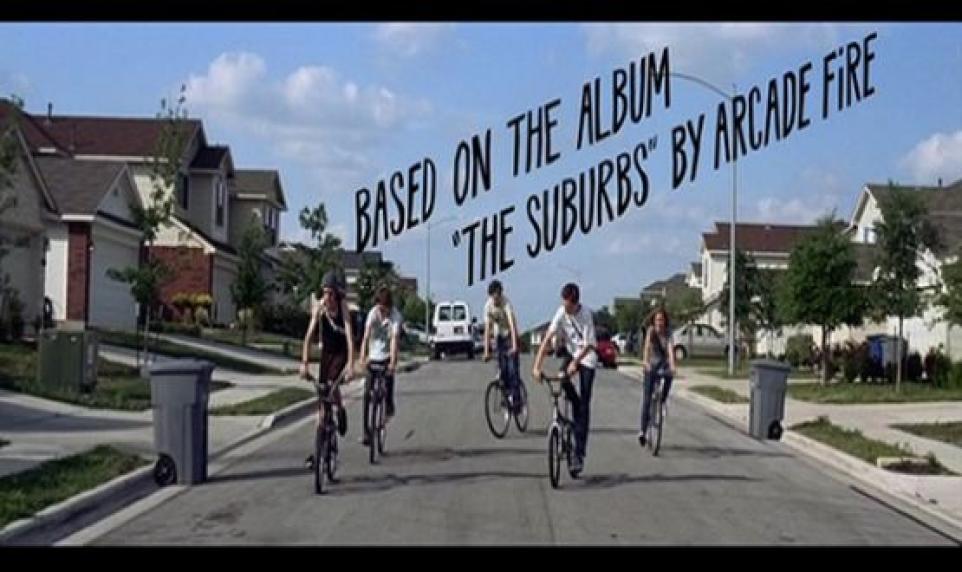 Having conquered the music world, Arcade Fire have now set their sights on cinema. Teaming up with director Spike Jonze, the band have created a thirty minute short that is based on their Grammy Award-winning LP, 'The Suburbs.'

'Scenes from the Suburbs' -- co-written by Jonze alongside Arcade Fire front man Win Butler and band mate/brother Will -- will be made available via an upcoming reissue of 'The Suburbs.' Said deluxe edition is also set to feature two new tracks, 'Speaking In Tongues' and 'Culture War,' and will be released outside North America on June 27th (August 2nd in Canada & the US).

The flick follows a bunch of dizzy teenagers living in a dystopian suburbia, slowly losing their innocence and freedom to the encroaching evils of adulthood, helped along by the crushing military power under which their town is ruled. We watch as the group grow old, and in turn, grow apart, in the most devastating fashion possible.

An uneasiness flowed through me after I watched 'Scenes from the Suburbs.' Something had most certainly distressed me, although I couldn't (and still can't) pinpoint what. I felt strange, upset, but also quite hollow.

I think it's true to say the film lacks any real meat -- which is understandable, after all it's only a 30 minute short. It often felt depthless, nay, irrelevant, even. It was hard to wholly lose yourself in the fantasy landscape the band were trying to build, with the terrifying armed-control which the suburbs were victim to remaining a somewhat unconvincing concept throughout the film's short period. However, Win Butler recently stated the band "were trying to show the emotion and the emotional links without necessarily getting deep into the plot."

This has been achieved flawlessly. The sincere sense of teenage friendship, teenage love and teenage loss really does plummet through the screen full force. The fact the film features a bunch of unknowns, too (so presumably kids free of agents, makeup and pushy Mothers), it probably was authentic action at work.

Perhaps the most important thing, however, is how this short will affect me when I listen to 'The Suburbs' henceforth. An already sublime album, the LP's overwhelming nostalgia has only been enhanced, with Butler's lyrics of long gone summers and long lost friendship now complete with a somewhat disturbing face in the form of the kids from the movie, who in turn stir up my own experiences evermore.

A truly successful dip into the waters of what Win Butler calls the band's "visual legacy," stream 'Scenes from the Suburbs' over at MUBI.com now.