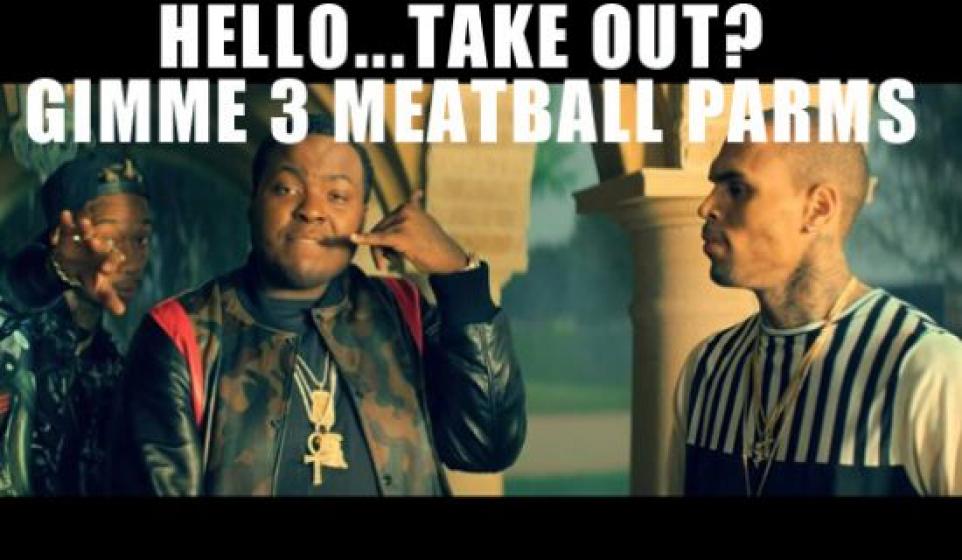 I've never been one to take myself or anything else too seriously, but every so often something catches my attention, makes me stop and say, "The Fuck is This?" (the title totally makes sense now doesn't it?).  We've dealt with this before, only this time we're dissecting Sean Kingston's latest track, "Beat It (Feat. Chris Brown and Wiz Khalifa)."

Who's Sean Kingston, you ask? Well, if you're aware of him at all, it's because of that song he did forever ago where they awkwardly bleeped out "suicidal" on the radio edit. I assume Chris Brown and Wiz Khalifa need no introduction.

So what's so awful about Sean Kingston "Beat It (Feat. Chris Brown and Wiz Khalifa)"? Well, watch the video first, then we'll get to that.

First, there's a lot of "meat" on this bone. Where to begin?

For starters, Chris Brown shouldn't be allowed with 1,000 miles of a song called "Beat It." Then again, self-awareness isn't really his bag.

And Wiz Khalifa, the line, "If your pussy was a book Im'ma read up on it" is especially troublesome. I mean, if her pussy is a book, why not just read that genuine article instead of 'reading up on it'? C'mon man, you're comforming to so many negative stereotypes here.

Which brings us to the biggest meat of all: Mr. Kingston. Making fun of people's weight is frowned upon, but what isn't these days? And let's be real, dude is big. As our editor Glitch put it, "He looks like fat Philip Michael Thomas." At the beginning of the song he sings, "I've been out here looking for a girl like you," but it's clear he was distracted on his search by some potato salad, Oreos, pulled-pork sandwich(es), leg of lamb, etc.

While this video features a bevy of beautiful, scantily-clad women, rest assured that none of them would acknowledge Kingston's existence if he wasn't quasi-famous/rich. And if Kingston is getting some intimate time with any gal who looks like the ones in this video, you can guaran-damn-tee he's paying for it.

Lastly, if you turn the sound off, is this video any different than Lonely Island's "I'm On a Boat"?

What was your favorite/least favorite part about Sean Kingston "Beat It (Feat. Chris Brown and Wiz Khalifa)"?

Is thin privilege a real thing?

No question here, but for anyone who clicked on the above link, let me just say that as far as I know that blog is completely serious.

Why the f*ck were there military-grade helicopters in this video?

Should Sean Kingston go back to the faux-rastafarian vibe he had on his first record? (plus then he could blame his weight on the munchies.)

Why is Chris Brown still a thing?