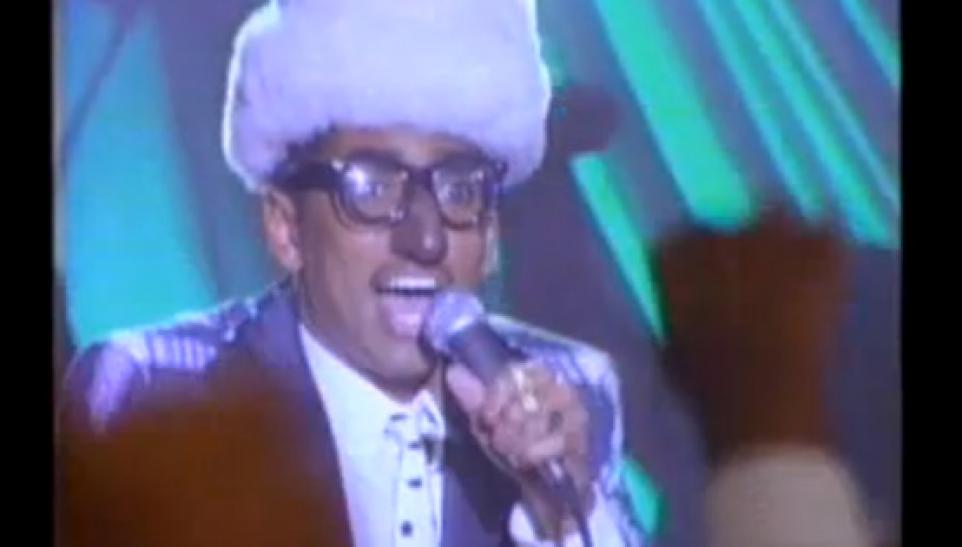 This song is lifted from the rap troupe's debut album, Sex Packets. It is sung by Shock G's goofy alter ego, Humpty Hump, who had a huge prosthetic nose, wore insane pimp outfits and was obsessed with sex...basically!

Since its release, “The Humpty Dance” has been sampled over 40 times by artists including Spice Girls, Public Enemy, LL Cool J and Ice Cube.

Check out the official video below, and oh, try spot the young Tupac Shakur, who cut his teeth with Digital Underground in the early 90s!

And while we are on the subject of twerkin', enjoy Sir Mix-A-Lot's ass-shakin' “Baby Got Back.” This dropped in 1992, a year after “The Humpty Dance.” We can't decide which is more of a classic?!

Verse One: Humpty Hump (Shock G)
All right!
Stop whatcha doin'
'cause I'm about to ruin
the image and the style that ya used to.
I look funny
but yo I'm makin' money see
so yo world I hope you're ready for me.
Now gather round
I'm the new fool in town
and my sound's laid down by the Underground.
I drink up all the Hennessey ya got on ya shelf
so just let me introduce myself
My name is Humpty, pronounced with a Umpty.
Yo ladies, oh how I like to hump thee.
And all the rappers in the top ten--please allow me to bump thee.
I'm steppin' tall, y'all,
and just like Humpty Dumpty
you're gonna fall when the stereos pump me.
I like to rhyme,
I like my beats funky,
I'm spunky. I like my oatmeal lumpy.
I'm sick wit dis, straight gangsta mack
but sometimes I get ridiculous
I'll eat up all your crackers and your licorice
hey yo fat girl, c'mere--are ya ticklish?
Yeah, I called ya fat.
Look at me, I'm skinny
It never stopped me from gettin' busy
I'm a freak
I like the girls with the boom
I once got busy in a Burger King bathroom
I'm crazy.
Allow me to amaze thee.
They say I'm ugly but it just don't faze me.
I'm still gettin' in the girls' pants
and I even got my own dance
{Chorus:}
The Humpty Dance is your chance to do the hump
Do the Humpty Hump, come on and do the Humpty Hump
Do the Humpty Hump, just watch me do the Humpty Hump
Do ya know what I'm doin', doin' the Humpty Hump
Do the Humpty Hump, do the Humpty Hump
Verse Two:
People say "Yo, Humpty, you're really funny lookin'"
that's all right 'cause I get things cookin'
Ya stare, ya glare, ya constantly try to compare me
but ya can't get near me
I give 'em more, see, and on the floor, B,
all the girls they adore me
Oh yes, ladies, I'm really bein' sincere
'cause in a 69 my humpty nose will tickle ya rear.
My nose is big, uh-uh I'm not ashamed
Big like a pickle, I'm still gettin' paid
I get laid by the ladies, ya know I'm in charge,
both how I'm livin' and my nose is large
I get stoopid, I shoot an arrow like Cupid,
I use a word that don't mean nothin', like looptid
I sang on Doowhutchalike, and if ya missed it,
I'm the one who said just grab 'em in the biscuits
Also told ya that I like to bite
Well, yeah, I guess it's obvious, I also like to write.
All ya had to do was give Humpty a chance
and now I'm gonna do my dance.
{Chorus}
Breakdown:
Oh, yeah, that's the break, y'all
Let me hear a little bit of that bass groove right here
Oh, yeah!
Now that I told ya a little bit about myself
let me tell ya a little bit about this dance
It's real easy to do--check it out
Verse Three:
First I limp to the side like my leg was broken
Shakin' and twitchin' kinda like I was smokin'
Crazy wack funky
People say ya look like M.C. Hammer on crack, Humpty
That's all right 'cause my body's in motion
It's supposed to look like a fit or a convulsion
Anyone can play this game
This is my dance, y'all, Humpty Hump's my name
No two people will do it the same
Ya got it down when ya appear to be in pain
Humpin', funkin', jumpin',
jig around, shakin' ya rump,
and when the dude a chump pump points a finger like a stump
tell him step off, I'm doin' the Hump.
{Chorus}
Black people, do the Humpty Hump, do the Humpty Hump
White people, do the Humpty Hump, do the Humpty Hump
Puerto Ricans, do the Humpty Hump, just keep on doin' the hump
Samoans, do the Humpty Hump, do the Humpty Hump
Let's get stoopid!
{Chorus}
Oh, yeah, come on and break it down
Outro:
Once again, the Underground is in the house
I'd like to send a shout out to the whole world,
keep on doin' the Humpty Dance,
and to the ladies,
peace and humptiness forever