Top 9 Musicians You Need to be Following on Instagram

Whether you’re looking for new music or looking to fill your Instagram feed with great content, it can be hard to narrow down the options. However, we’ve made it easy for you by compiling the top musicians you need to be following on Instagram right now.

Of course, it’d be remiss not to mention that We Are: The Guard has our own Instagram account, where we’ll be sharing sneak peeks into the lives of our artists, our latest content, and what #labellife is really like.

Keep reading to find out who your next Instagram obsession will be. 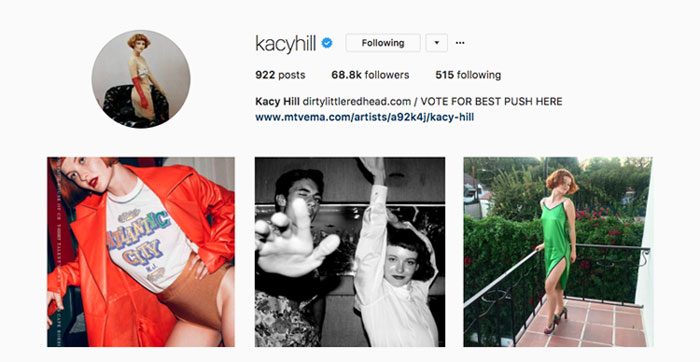 Kacy Hill by far has one of the best Instagram accounts. While it’s not uncommon for musicians to post flawless, professional photos, Kacy Hill shares the best of both worlds. While she looks fabulous in pretty much every photo, her Instagram stories are where it’s at. You wouldn’t even know she’s Kanye West’s protégé or that she used to be an American Apparel model just by watching her stories, mostly because she’s so damn relatable. Also, she has the voice of an angel. So yeah, you need to go follow her, like right now.

Alright, I know what you’re thinking. There’s no content here? Literally he has like 3 posts. BUT that’s exactly why you need to go follow James Blake. When something does make it to his sacred Instagram wall, you know it’s worthy and valuable. He’s always posting info about secret pop up shows and warehouse parties. His Instagram may not be one you look at when you’re trying to zone out and pass some time, but it’s definitely one where you’ll find out all you need to know.

Ever wonder what an artists’ process is like? Cara Salimando lets you in just a bit as she consistently posts intimate shots of handwritten lyrics. While that’s not all she posts, it’s pretty cool to get a glimpse of what it’s really like— not to mention that the rest of her content is 100% on point. Whether she’s posting clips of songs she’s written for other artists, dreamy, vintage shots, or her own music (like her amazing new cover of “Nothing’s Gonna Hurt You Baby”), you just can’t go wrong. 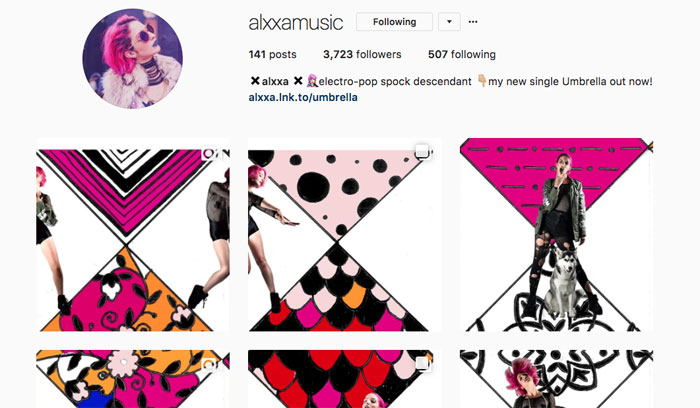 I’m pretty convinced that Alxxa is actually wonder woman. Not only is she an amazing songwriter, but she’s also a crazy talented designer/artist. Seriously, just go do yourself a favor and look at her Instagram right now. It’s filled with intriguing artwork, and she’s makes it herself. You could easily spend a few hours getting lost in her work, as there’s just so much to unpack. I really don’t know how she does it. It’s so freaking cool. 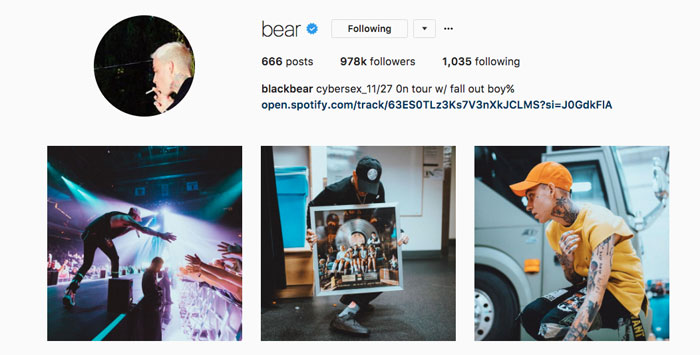 If concert photography and generally awesome aesthetics are your thing, then look no further than Blackbear’s insta. As I’m looking through the LA native’s photos, I’m in awe of how someone’s life could be that cool. However, regardless of the success he’s had, one of my favorite things about his Instagram is how honest he is. Using the small amount of space that qualifies as a photo caption, he pours his heart into it— whether writing about the love he has for his fans or the fund he sent up for Vegas shooting victims or the emotional journey he’s gone through with his health, it’s clear he has a lot of heart, in addition to dope beats.

Billie Eilish is probably of the coolest pop artists out there right now. At only 15 years old, she’s already killing the game. From selling out her own headlining tour to being chosen as Apple’s Up Next artist, she undoubtedly has a long, promising career ahead of herself. What makes her Instagram so great, however, is that she’s probably one of the most effortlessly chill pop artists out there right now. Her Instagram stories are hilarious, and she’s always up to something. I just don’t see how you could get bored watching her stories.

R&B duo Oliver Riot have a lot of soul in their music, and they also have a lot of soul in their photos. Their Instagram is completely shot in black and white, with a mix of behind the scenes photos, personal essays, and music teasers. Without a label or an album, the identical twins reached a million streams on Spotify in one month alone. Now, they’ve already reached over three million.  How they reached their success is probably one of the wildest stories out there, and each time they share a piece of it, you can’t help but feel inspired. Go look and learn for yourself by heading over to their page.

Josephine Vander Gucht of Oh Wonder is probably one of the cutest humans alive, and her Instagram is even cuter. Literally looking at her photos just puts you in a good mood. Her photos are hilarious (I mean, just look at the first one in the above photo…), and even though she’s an international success, she’s still normal af. If you’re in need of a smile or laugh, just go follow her right now. Not to mention that Oh Wonder is by far one of the best bands out there.

At only 19 years old, the rising artist already has over 1 million followers on Instagram— and for good reason. The singer-songwriter is always up to something. Naturally, you already know his Instagram is going to be happening. I mean his debut album just went platinum within a year. Obviously, Khalid knows what’s up. From becoming the most listened artist on Spotify (ahead of Justin Bieber, Taylor Swift, Ed Sheeran, Sam Smith, etc) to performing on The Today Show to selling out major shows, Khalid is the coolest. Do yourself a favor and stay in the loop by following his Instagram.