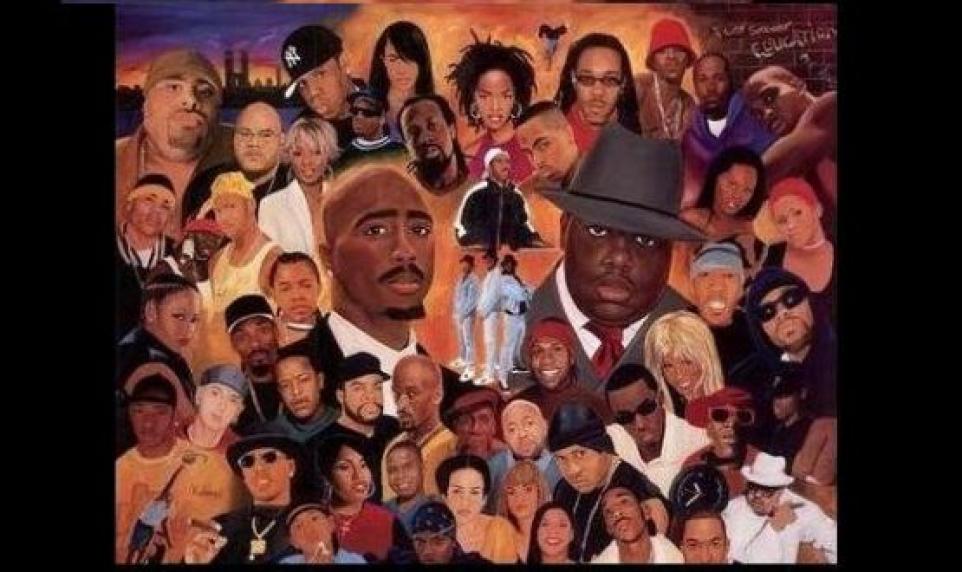 After a whole lot of thinking and researching, I have decided that rappers are either one, not creative, or two, all their creativity has been used up on their rap tunes (What rhymes with gun again?), when they get to writing their skits. What's wrong with stealing your skits from old school rappers? (Yes, I am talking about you, Kanye West.) it's boring for one, and who really wants to spend money on an album with 5, 3 minute songs, and 10, 30 second skits that you have stolen from rappers who actually have a brain? Not me. Some of these skits are clever, and others are so bad they are great.

I thought skits that were more than fillers on an album deserved some recognition, so here they are: the top ten best original rap skits.

It seems like Ace should have nailed this album with all the artsy inspiration from the art institute. Maybe Ace's cracker ass roommate was the reason this album was such a letdown, or maybe it was the lack of chrome; nevertheless, Ace's obvious slam at us nerdy white folk makes this skit priceless.

I wasn't at the edge of my seat wanting to know who the Wu Tang Clan wanted to beat up with their kung fu, or impressed with their clever Shaolin Finger Jab metaphor that has two meanings in the urban dictionary. What's great about this introduction is the man who sounds like Andy Griffith and the mysterious Asian music playing in the background that makes you feel like you're watching the credits of a James Bond film.

Teaching teens who work in fast food restaurants to spit in customers food is not the only thing the Fugees did; the score is a unique and original skit that makes you laugh even if you aren't a fifteen year old boy.

What's great about Mobb Deep is that, before 50 Cent and Young Buck started brain washing them to believe singing songs about going to upscale clubs and getting girls to, "give it to them, give it to them" made them original gangsta's, people could relate to their music. There were a lot of people who wanted to say fuck you Mr. President, but what bigger slap in the face to a president who loved fighting mob crime than an album called Murda Muzik.

The only thing better than one rapper dissing another rapper, is one rapper dissing a whole bunch of rappers. Who better to impersonate Cannabis, Jay Z, and Obie Trice than Eminem? Eminem even had the balls to do it on Trice's mix tape, but heck, if Marshall pisses anyone off, he can always blame it on Slim.

I'm not gonna lie, Ice Cube does a pretty good job of manipulating his listeners into believing he is hard by sticking his feel good, gay boy "drive by skit" in-between, "get off my dick and tell yo bitch to come here" and " Rollin' wit' da' lench mob." Regardless of making you feel like you has sat down in front of the television to watch Glee for a minute, this has to be one of the best skits of all time as I am still sitting here wondering after 21 years, how in the world Young MC could even give the darkest person an adrenaline rush to kill; if it had been me in that car, 50 Cent "gunz come out" would have been blasting from my boss stereo.

Back before we forget about the Dr, his girls still waited on him hand and foot, and surprise, surprise, game show hosts even let him when the 20 dollar prize on GGSET (Ghetto Game Show Entertainment Television). How did Dr. Dre have the voice to slam Easy E's career after his car was bombed, we will never know, but somehow he managed to make this skit memorable with his lack of voice and blows to Wright.

I was jumping around and singing along to "Roses" when my ITunes shuffled to "You may die tonight." The first thing I wondered was, why in the world would ITunes mistake Quincy Jones for Outkast, and then I realized, it was Quincy Jones and it was an Outkast Album. Outkast had decided on an interpolation of "summer in the city" by Quincy Jones for the introduction of Atliens… SURPRISE! The question is, is the mysterious woman praying that the aliens won't kill her, or is it the folks in Atlanta she is scared of?

If we are all brutally honest, we'll all admit that the good ol' G Unit had it coming; he is notorious for starting kindergarten fights, annoying, not to mention that tough guy act he puts on. Guess I always wondered why the gunz didn't come out when 50 Cent was robbed in V.A several years ago.

Not that Eminem's first debut album "Infinite" didn't have some good tracks, but let's face it, we really didn't start loving Marshall until his perverted, twisted ultra ego Slim Shady surfaced, and don't even pretend Slim offends you; deep down, he is the one that we can all worryingly relate to because he sounds exactly like the little voice in our heads saying yeah it does sound fun to drive around screaming, "I don't give a fuck!" with our windows down and our systems up.  Slim Shady is an icon, and the Slim shady LP Intro sums up everything Shady is, and often what we wish we had the balls to be!