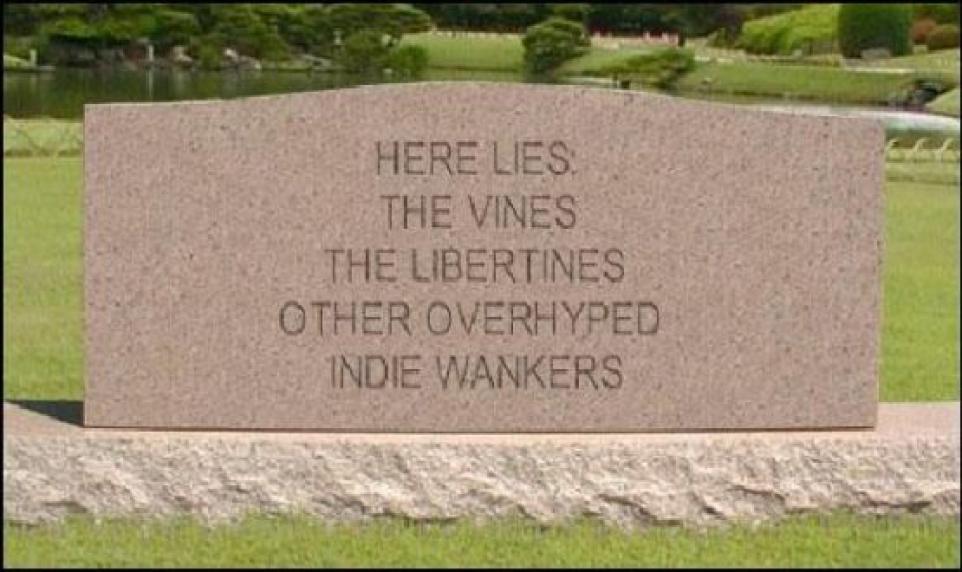 The "one indie hit wonder" phenomenon doesn't occur too often in the indie world. Usually, indie bands take more of the "slow burn" track, with most of the good ones putting out solid, relatively un-commercial albums every few years (e.g., Fleet Foxes, Band of Horses) and the bad ones often disbanding before you even realized they existed. A few bands like Death Cab for Cutie and Arcade Fire have really achieved mainstream success and now sell out arenas. Then, there are those few indie bands who had one awesome song that seemed to be playing everywhere for about a summer, only to fuck everything up by breaking up or making henceforth shitty music and drifting into irrelevance. And here they are, on a platter.

Superdrag was indie before indie was indie. Chances are, their name doesn't ring much of a bell, but you'll recognize this song, their 1996 single "Sucked Out," when you hear it (by playing the below vintage vid from "120 Minutes"... 'member that ish?!) It's still a pretty damn catchy song. The band did release a couple more albums after this one ("Regretfully Yours") but never had any other big singles and has been "on hiatus" since 2003 (sad face).

They were supposed to be the next Strokes. Only British ... or something. In 2003, they got kinda big with this song, which you probably had on your first brick-like iPod. Then Pete Doherty formed Babyshambles and got really addicted to heroin and crack and stuff. Oh, and then he was dating Kate Moss and she also appeared pretty cracked out for a while. The End.

Here's another one from 2003. In case you don't remember, and you probably won't, this super-catchy song about being a "cutter" (I think) was everywhere that year. These Canadians did release another album or so but never had another hit.

This bouncy, awesomely-titled indie hit from the Scottish band Dogs Die in Hot Cars' album "Please Describe Yourself" was a good one, indeedy. Sadly, the band broke up before recording another album and according to Wikipedia, the bass player is now works at a bar in Glasgow. Aww.

This 2004 single, off The Stills' impeccable first album, "Logic Will Break Your Heart," is a fucking winner. The Stills did release a second and even a third album, but after Greg Paquet, the vocalist and lead guitarist, left in 2005, they stopped being brilliant. In 2011, The Stills announced they had officially disbanded.

This 2002 song is nothing short of awesome. These Aussie garage rockers somehow created the perfect 2-minute grunge stomper. Weird Al even covered it in his "Angry White Boy Polka Medley" (LOL). I was shocked when I looked them up and learned that they actually released several subsequent albums. I've never heard any other songs of theirs. Have you?

In my opinion, PB&J are a good band, and they've actually released a total six (6!) albums in their career. Then again, their 2006 single, "Young Folks," is the only song of theirs anyone (other than me) knows. And every time they come out with a new song, the unanimous verdict is always "Not as good as 'Young Folks.'" Although I'm ever PB&J's loyal defender, whenever I listen to this delectable tune, I can't help but agree that no other song of theirs is as good.

Here's another early 2000s garage band that was hugely popular for about a minute. Remember how they would always wear those black and white suits onstage? That's actually pretty much the only thing I remember about them, other than this song.

I must have played this song on Guitar Hero about a million times (is it weird that I move my fingers to play the buttons whenever I hear it? Wait ... don't answer that.) This was one of those HUGE songs that got played out and now you rush to skip it whenever it comes on on Pandora. These guys plan to release another album in 2012, so we won't put the final nail in their casket just yet ... but it seems unlikely that they'll have another hit as big as "Take Me Out."

Yet another ghost of the 2003 indie craze. This was right around them time when The Strokes and White Stripes were making it big. "Are You Gonna Be My Girl" was pretty much everywhere back then, and you still hear it on the radio sometimes. But I ask you, Jet, in the words of multi-hit wonder, Janet Jackson: "What have you done for me lately?"

Who do you think will be the next one-hit-wonders of the indie scene? My money's on Foster the People, and Edward Sharpe and the Magnetic Zeros.