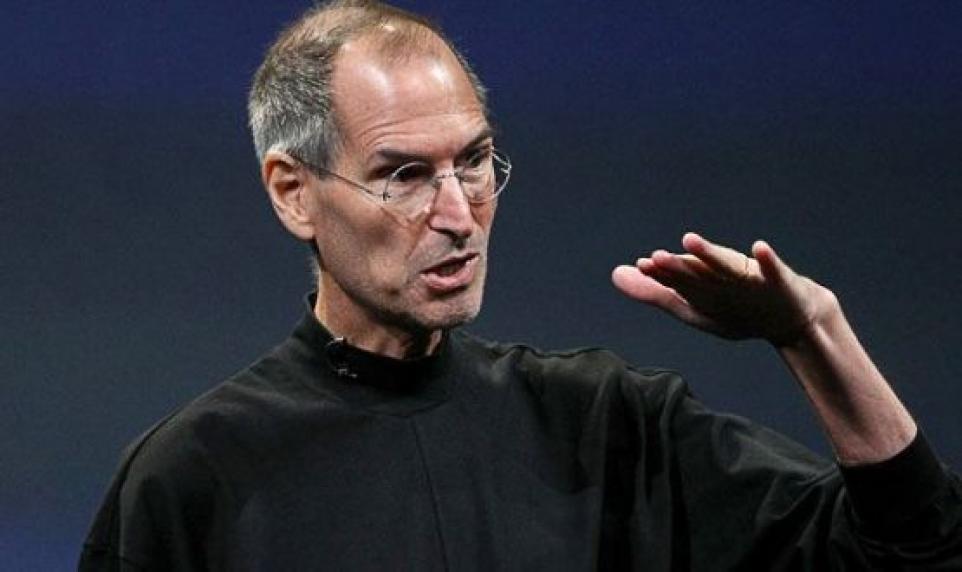 Who is the Next Steve Jobs?

Many articles have been written as of late pontificating on who will be named the next Steve Jobs of our generation.

Full disclosure: I am not a hoarder of the latest technological devices.  I have a shitty cell phone that only allows me any semblance of reception from one corner of my linen closet and only when contorted into a strange reverse cowgirl downward dog plank pose.  But I do have those annoying friends who whip out their super-cool $800.00 phones and ignore me at lunch to play Words With Friends or that perverse little game where you kill a bird by slingshotting it into a pig's head.

I know Steve Jobs was a groundbreaker.  And if he hadn't established Pixar, there wouldn't be a myriad of vibrators named after Buzz Lightyear.  I get all that.  I really do.  And I get the fact the man is dead.  I'm not knocking his achievements or contributions.  So before you go on an absurd "a man died and we should revere him for his offerings to the world" rant, calm down, Edith.  This isn't an iconoclastic piece accusing Steve Jobs of being the Antichrist.  Although I want to point out that Copernicus, Darwin and Edison are revolutionaries.  So was Che.  I, for one, don't give Jobs that designation.

But that still doesn't answer the question: who is the next Steve Jobs?

If I was a betting bitch, I'd put money on Julian Assange.  He's got the technology rap down pretty tight; an early ethical hacker and programmer, Assange has been a pioneer in the free dissemination of information and mass exposure to spotlight transparency well before he began Wikileaks in 2006.  Plus he has that whole hot, semi-Albino thing going on.  But the issue with Assange is he has to live long enough to continue inventing.  And with the copious rhetoric spewed about him, coupled with all his detainments, even staunch anti-conspiracy theorists wonder if Assange may meet with an "accidental" (government) end.

I dig the free program pioneers.  Men like Richard Stallman and Linus Torvalds.  Men who want to get programs and technology into your hands, turning over source code and giving you the opportunity to expound and expand; to build upon their inventions and make them your own.  These men, and men of their ilk, do this for the love of discovery.  But these true pirate explorers lack the desire to arrogantly presume to tell us what we need before we realize we need it; something Jobs was brilliant at.

And if you're screaming Mark Zuckerberg into the screen, I will find you and punch you in the pelvis.  Please, a website that gives skanks a platform to showcase their fish lip faces, streams of photos of middle-aged, high-income white people throwing gang signs, and you obsessive access to pictures of your ex and the idiot you were dumped for?  Yeah, it's heartwarming that my 28-year-old cousin discovered he was adopted via Facebook, but is Zuckerberg actually a modernizer of anything other than a website with a huge circulation?  Is the man responsible for promoting Farmville and an app that tells you your fucking stripper name really a pioneer?  Stripped down to the tits, it's simply content.

Which brings me to the punch line: there is not going to be another Steve Jobs because Steve Jobs is dead.  So stop looking.  Oh, were you actually waiting for the announcement that someone else is to be named the next innovator, the next revolutionary?  Could it be that the next trailblazing mastermind is... you?  Because these people, the creators, the explorers, the luminaries, don't come from some unicornian sect of woodland cyborgs; they're just like you.

Why waste time more time bending over the thrones of false gods?  And why the hell are you waiting for articles to unearth the next visionary?  Knock it the fuck off and look in the mirror.  Are you really too busy posting your Daily Message From God on Facebook to bother?  Because won't you be pissed if you blow it off and later discover that some asshole wearing a mock turtleneck and mom jeans developed your idea?  You have a duty, a supreme duty, to share your knowledge, your ideas and your creativity with the world; no matter what it is.  That is revolutionary and that is innovation.

The most important issue here is not the extrasensory hypothesizing about who the next chosen one will be because no matter who is named, he or she will ultimately face the limitations of being human.  At the end of the day, even with his access to technology and all his money, the playing field was leveled and Steve Jobs is in the same boat with the other eight million people this year who will not beat cancer.  So develop something that does.  Now.