Why Coachella Is A Poor Concert Experience 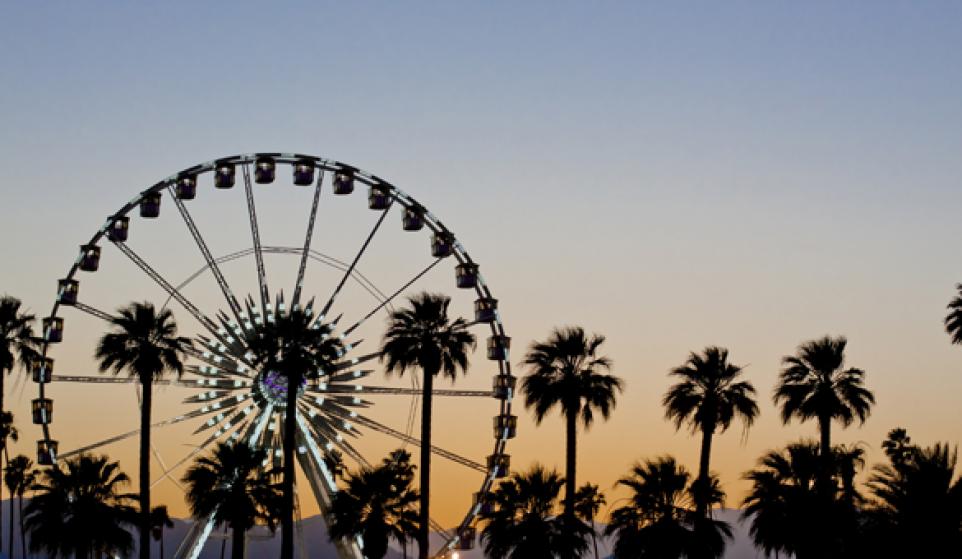 You know what…after going to Coachella for so many years…I’ve had an epiphany.   And here it is.  It’s something that has been lingering in my consciousness (much like we’ve been tricked into believing that London is a great city to visit…it’s not)…is that Coachella this year is one of the worst concert experiences you can partake in.
Ok don’t get your panties in a bunch.  How so?  Let me begin.
Please tell me if this sounds like the framework for a great concert experience time.
1)You can’t see anything.  Sure maybe I didn’t get there at 12pm and wait 10 hours for Arcade Fire to go on.  But as far as ‘seeing bands’… really you can’t…you just can not see them.  You are so removed from the concert experience it’s like watching whales on a deep sea trip.  Yeah like get out your binoculars…’Oh, I saw the guitar player…and there’s the singer!’  So I end up watching the jumbo-tron…so um, why not just watch a YouTube video.  It’s the same thing minus more of the following.
2)There’s your friends, 10,000 other cool people (including a yearly Danny Devito sighting), and 200,000 douche bags.  I’m serious.  For instance, I go to see Cut Copy…I get there real early.  This is THE band I drove 150 miles to see.  I wait 20 minutes and inch my way to the front.  And then the douche bag cavalry arrive, muscling their way in like fucking indie sweaty rock barbarians… including the 6’ guy with the kid n play hair cut who stands in front of me.  I don’t mean in front of me...i mean 1/8” in front of me, I mean like on top of me and then his buddy’s breath I can literally feel on the back of my neck.  There goes my Cut Copy show.
3)Surprise!  It’s just WAY TOO FUCKING HOT.  Goldenvoice...how about February or March for Coachella.  You ever walk around Palm Springs?  (listen up Goldenvoice) They’ve got these mist sprayers…keeping the patrons cool.  Goldenvoice…what’s up?  $800 for 3 day pass and you can’t spring for some type of air conditioning inside the tents?
4)You’re treated like criminals.  Security is rude, and if you had a VIP or wristband pass you have to wear it all 3 days like a tagged criminal.
5)If one more person steps on my Onitsuka Tigers….
6)If you want alcohol other than Beer … you need VIP tickets.  So your Sailor Jerry’s Rum (I’m an original fan) or Vodka Tonic doesn’t cost $9 it cost $309 for the extra VIP access.
7)In the tents … there is definitely an Over Capacity issue that any Fire Marshall would salivate over.  Trust me…one year there is going to be an incident … and it won’t be pretty.
8)Last but not least….for all of these fine concert experiences, Yes!  You get to pay $800!!!  Hey Goldenvoice…for $800 or even for a General Admission ticket…Here’s an idea.   How about Free Bottled Water…All you can drink?  Would that hurt you so much?  This pricing on tickets has just gone out of control.
And since I have never done the camping experience on the Polo field…I have no authority to comment…but it doesn’t sound like you’re at Yellowstone.
I’m not even going to start talking about the traffic…that’s a given at any worthwhile event.  Or the $2 bottled water I bought which was actually very well priced minus the venders continually begging for a $1 tip after handing me back 8 ‘ones’ from my $10.  A 50% tip for a 10 second transaction for doing your job?
Now, Ok I might be biased…I’m saying the above because 40% of what is playing, I’ve seen before or in the last 6 months.   So a lot of Coachella to me has become pointless.
But if you live somewhere where there isn’t access to these bands, or if you only get once or twice a year to soak it all in, Coachella is still the #1 epic gathering.   But it’s not like it used to be.  It used to be a semi pleasurable experience.
Like…compare Coachella…which is supposed to be a premier concert going experience…with 2 of my favorite recent concerts in Los Angeles last year.  Royksopp at The Wiltern and Dada Life at The Palladium.  Both shows were packed but still comfortable…there’s room to dance, it’s air conditioned, most any place you’re standing, is a good view of the artist…and ok they still treat you like criminals at the door and people still step on my Onitsuka Tigers….but THIS is a good concert experience.   Or better yet…in comparison, seeing Cut Copy 4 years ago at SXSW in a room of 300 people.  Now THAT’S the way to enjoy a great artist.
You see, the key word here is experience.  Coachella is not a concert going experience anymore (what?  I said it.)  It’s for sure a life experience.  But as far as experiencing music…this year it felt like a series of annoyances and insults (including ticket price ... and Hello, if you could get tickets?) that Goldenvoice makes you pay out the ass for.  And if you’re real goal is to REALLY experience music and see your favorite band it’s just all totally pointless.  Because you WON’T see them...you will hear them though from ¼ a mile away.
So if you missed out on tickets this year because of the fast sell out, don’t feel like a loser (like I almost did).   You can catch whatever you missed on blog highlights / YouTube minus points 1-7 above and heatstroke and $800 less poor (not counting gas, hotel, bribing police, and whatever other non sanctioned activities you might have been up to).
This year I realized.  Coachella sucks donkey dicks.  Long live great concert experiences.   Unless you are hard to the core…Coachella ain’t happening anymore.  (that rhymes).
Or maybe I’m just jaded (which is absolutely and probably totally very likely).  But you tell me.  Did Coachella go to the "whatever" category or was it amazing?