WTF: JAY-Z BUYS SMUCKERS SO HE CAN BE THE J IN PB&J

Jay-Z, media mogul, former rap-icon, and househusband to Beyonce, has announced on Twitter that he will be taking on a new partnership with Smucker's brand jam. This should come as no surprise to those who have followed Sean Carter’s business moves over the years. Looks like investing in Tidal, the Brooklyn Nets, Budweiser Select, and RocNation just wasn’t cutting it anymore.

Now, with this Smucker’s deal, Jay-Z is working on becoming so culturally ubiquitous that anytime anybody orders, makes or asks for a “PB&J” sandwich they will have to think of the J as Jay-Z himself.  Many think that this move comes from years of being largely overshadowed by his more talented, gorgeous and regal wife, Beyonce. That is is just a PR stunt reeking of desperation for one last shot at relevancy outside of basically being her opening act on the OTR III tour.

Fans of the sandwich are not as psyched about the name change as Jay, claiming that it’s a bit unsettling to have to think of the 48-year-old rapper every time they bite into their favorite sandwich.

“Jay-Z likes it when the jelly is layered between two slices of extra crunchy,” says the PR release we were given alongside this announcement. “Jay-Z branded Smuckers will hit shelves next week. Make sure to spoon an extra one out for the man himself.”

Personally, we don’t know how to feel about this. One hand, it’s incredibly stupid. On the other, who doesn’t want their favorite artists to start branding food? What’s next? Eminem M&Ms?  6ix9ine Skittles?  Trump Steaks? Rap Snacks?

Not to be outdone, Beyonce has also started campaigning to have the name of “butter” legally changed to “Butteryonce.” I think that one is actually going to be on most local ballots during election day on November 5th. So make sure to get out and vote. If you want Butter changed to Beyonce vote No, and if you want Butter to remain the same vote yes. I know, I know, these ballot measures are always so confusing. 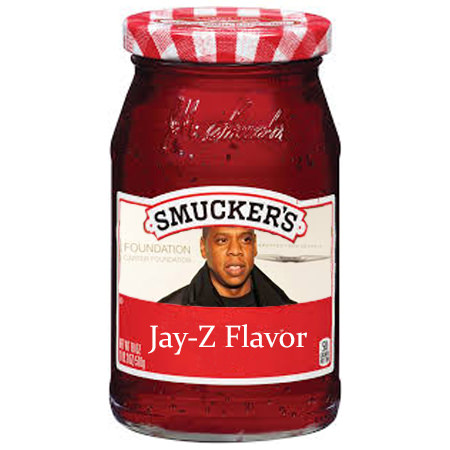 This all comes after Jay-Z was working on having the HOV lanes changed to HOVA lanes and the US Government was just not having it. So that’s why he was buttering up so close with Obama… Hmmm…

This is without a doubt the dumbest headline I’ve ever written and that’s saying a lot. This comes from the guy who once wrote “Blur and Oasis BOTH to be Inducted into the Rock & Roll Hall of LAME” and “Justin Timberlake Wins Nobel Peace Prize for Solving World Water Crisis, Discovering his Ability to Cry Rivers.” We Are: The Guard’s WTF articles are classically silly, but you already know that, right? That’s what you’re here for. You’re already down with the clown. Thank you for your support.