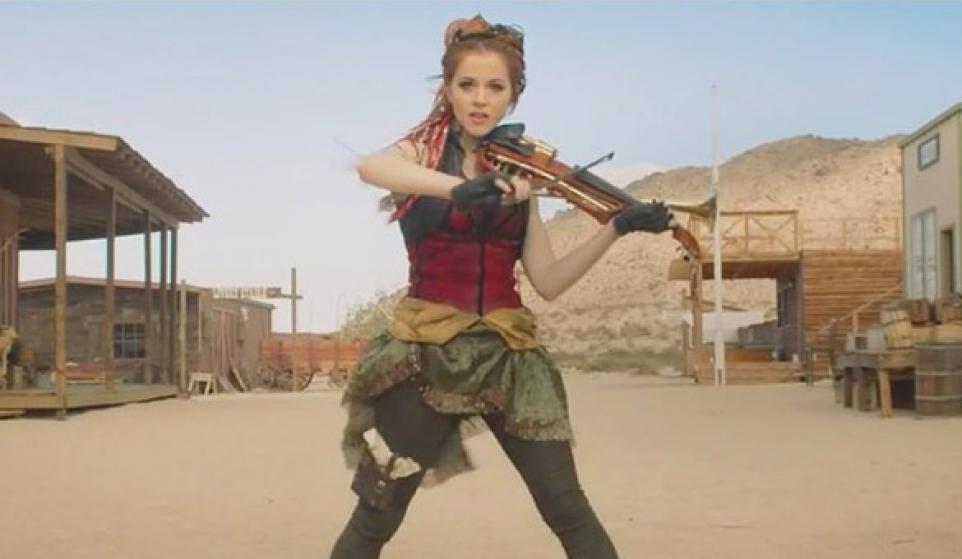 Do you ever find yourself watching a Western and thinking, 'The costumes and atmosphere are great, but there's too much violence. If only they'd replace some of the gunfights, duels, and other bits of violence and machismo with dancing and performance art.' Well get ready to meet a kindred spirit in violinist Lindsey Stirling.

On her latest video, "Roundtable Rival," Stirling ups the ante for adding images to sounds. This ones a game-changer y'all. "Roundtable Rival" is quite possibly the greatest music videos of all-time. It hits on all the tropes people love about Westerns, while avoiding all the edginess and actual personality that people detest so much.

Stirling rushes out of her saloon to meet a gang of ruffians in the streets of an old-timey town who are dead-set set on robbing a bank using nothing but some sick guitar shredding. Being the sort of vigilante heroine we've always wanted, Stirling thwarts the evil gang with her violin that also has a trumpet on it.

Ok seriously, why is there a trumpet on her violin? I mean it's not like she's playing it or anything. Did someone actually think that would make it look cooler? The end result is that it looks like some kid has started gluing various toys together. Honestly, WTF is this?

This EPIC video reminded of the old SNL sketch with Norm MacDonald parodying West Side Story. Only  "Roundtable Rival" lacks the self-awareness and humor.

So this song isn't necessarily bad, and Ms. Stirling is rather attractive, but the video plays out like an episode of Power Rangers or some shit. Lindsey, you're a very talented musician, time to start having some self-respect and tell whomever comes up with your video ideas to 'F*ck off'.