So you’re off to Coachella and your packing list is looking a little light.
Sure, you’ve got all your outfits picked out and like what else do you ever really need lol?

Well don’t worry we’re here to help!
We Are: The Guard has gone ahead and put together a list of our top 10 Must-Haves to make sure that you, your friends and everyone around you has the best festival ever.

Let’s be honest for a second. We all know that Coachella is a magical place with amazing music, the most pristine festival grounds and literally every single one of the world’s beautiful people collected in one place at one time. But there’s a dark seedy underbelly to Coachella too, known better in these circles as ‘hella.’ I’m talking about the Bros. They love house and techno and Odesza too, you know? They’ve been listening to dance music or as they call it EDM since 2012 since they first saw Carl Cox and Swedish House Mafia at Ultra and their lives were changed, man. They’ll be all up in your grill pushing to the front, with their shirts off and muscles and small neon shorts that you could never pull off and you’re beginning to think that MAYBE you aren’t one of the beautiful people, are yo?

The Weeknd at Coachella Stage: BROS
Rezz in the Sahara Tent: Bros…
Maceo Plex in the Gobi: BROS. Let’s get out of here and go to Yuma.
Carl Craig, Kyle Hall & Moodymann playing some straight deeeetriot techno in the yuma: WHERE THE HELL DID ALL THESE BROS COME FROM? FUCK IT LET’S GO SEE SOME INDIE ROCK, THEY WON’T BE THERE!
Fleet Foxes: BROS.

They’re just inescapable. Get yourself some Bro-Repellant and maybe you’ll be able to avoid these swarming droves of Bros & Broettes just trying to get fucked up and PARTY! WOO! The best Bro-Repellent option is friends. Insulate yourself with a large enough group and stay in the center of them at all times and you should be just fine.

If you are showing up alone or just with one other person, may I suggest Palo Santo. It’s a sacred wood essence with cleaning and healing properties sort of like Sage. Light one of these bad boys up and it’ll clear out the bad vibes. Sure you’ll smell like a hippie, but that’s a worthy sacrifice I’d say. And if the Bros like the smell, then they’re cool and give em a chance. Maybe you should stop judging people, huh?

Honestly if you don’t have one of these set up by now and you’re planning on going to the festival, you’ve got the most piss-poor planning skills of any individual I’ve ever come across in all my years on this here Earth. Are you expecting to just wander into a campsite with a smile on your face and bunk down with some festie chick without a care and a flower in her hair? Good luck, I’ve tried that it doesn’t fare as well as you think it would.

I’m sure there’s still something available on AirBnB (this is not a paid advertisement) if you’re willing to spend more money on four days than I’ll ever make in my entire lifetime. Or just buck up and buy a camping spot, get down and dirty and live like over 50% of the attendees do. Plus its a fun way to make friends, listen to music (STILL?) bumping at 4AMand wander around until you find the sketchiest dude who will sell you some bunk ass shit that just ends up being oregano and sugar packets.

Get a clue! Coachella ain’t all about The Stinkend, Beyoncelame and Skittles. Paul Tollet and his staff of bookers PUT IN THE WORK, building the most exceptional, genre-spanning, generationally diverse lineup of any festival in the entire world and it’s essential to show them a little bit of respect by doing the research past that one Post Malone song you heard on the radio and thought was kind of cool. Get a game plan together with the homies, dig in a little bit. FIND SOME NEW SHIT. CHECK OUT THE DO LAB AND THE HEINEKEN HOUSE.

OR… just check out our Best of Small Print Coachella Posts for inspiration.
(This IS a paid advertisement)

4. Bring Your Own Water Bottle/CamelBak

Real talk, I don’t want you to die out there. Coachella is HOT (and I’m not just talking about the people).

But you know, $5 bottles of water add up and I don’t want you going broke either and declaring bankruptcy and pinning that on me either. So how about you bring your own Water Bottle or Camelbak instead? I promise no one will think you’re a dork, if anything they’ll be grateful that you have water that can travel across the festival with them and they’ll all be drinking from it and you’ll single-handedly be the hero of the entire weekend. “Remember how much water _______ had? What an awesome person.” Also, try and eat a little bit of something. It’s good for you.

6. Leave the Headdress at Home

Cut that shit out.

It’s 2018. The world is a horrible place and we don’t need reminders of racism and cultural appropriation on our sacred festival grounds. I KNOW that it makes you look cute and you spent $19.99 on it at PartyCity months ago, but it doesn’t matter. Leave the headdress at home otherwise someone will have to smack it off your fucking head and then you’ll be stuck in a tiff right right in the middle of Kygo’s set and you’ll be crying that all you wanted to see was Kygo and this all could have been solved if you just used a little foresight and considered other people’s racial heritage before whipping out the most cliched, bullshit accessory since blackface. How about you dress like Donald Trump instead, I know it doesn’t make you look as cute but at least you won’t hurt anybody’s feelings. Well anybody who matters’ at least. BURN. 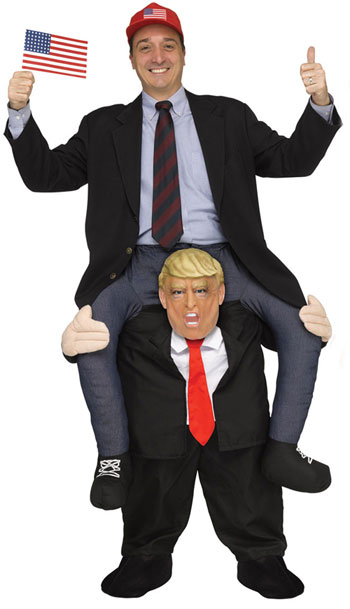 (This isn’t a paid advertisement, but we can’t use this image unless we link you to where the costume is for sale.)

Lol this is easy. Sure the festival is technically sold out, but there are hundreds of posts on craigslist, facebook and twitter of people trying to offload their tickets. Wait until the last possible moment and these tickets will dip even lower. Hell, if you’re good at haggling you might end up with a ticket below face value. Actually hit me up, I might have some friends who are starting to get desperate. Their loss is your best weekend of your entire life.

Coachella isn’t any fun at all. In fact it’s one of the most mind-numbingly boring places on the entire planet. It makes the DMV look like what you think Coachella is going to be like. You’re gonna need some distractions, that’s a guarantee. And with 100,000 people packed on top of each other your wifi signal is going to be more whack than having to use a port-a-potty. So why not get your hands on a good book to read for all the down time you’re going to have. Trust, you’ll thank me later.

[WE ARE: THE GUARD EDITORIAL STAFF DOES NOT CONDONE DRUG USE EXCEPT MARIJUANA BECAUSE ITS LEGAL NOW IN THE STATE OF CALIFORNIA, YIPEEE! SMOKE EM IF YOU GOT EM! WOOP WOOP SNOOP DOGG BABY! ]

Festivals are hard. Lots of things can go wrong.

It’s hot and the shower lines are long. Beer is costing you a second mortgage, but don’t even have a first. Three days out in the desert is one of the most challenging things you’ll have to face in your otherwise perfect existence. If you could just smell Air Conditioning for thirty seconds you might survive another 24 hours because otherwise you’re going to melt to the ground right here and never move again, OKAY? Lindsay wants to see St. Vincent but you want to see TroyBoi and you get into a fight and nearly break up over it and then your friends are like “good I never liked her anyways” and hers are like “you always complain about him in group chat, what good is he even?” and then you go your separate ways only to come together and make out during the entirety of The Weeknd’s set and your entire group will collectively facepalm.

NONE OF THIS HAS TO HAPPEN.

Let the bad bounce off your back.
Keep your head up and a smile on your face.
Remember that this is supposed to be fun and “going with the flow” is the coolest thing since you first discovered what happens when you put pop rocks in soda.

A Positive Attitude is the most important Must-Have at Coachella. Anything can happen to mess up your idyllic weekend in the desert. So don’t let it. Easy as that.