Now that it's fall, I love nothing more than to spend my days snuggled up by my imaginary fire and creeping on my faves on social media. Seriously, why do I need to “socialize” or “go outside” when I have Twitter to keep me entertained and emotionally invested on a 24/7 basis?! Luckily for you, I'm a generous person who's happy to share the results of these daily stalk seshes, hence We Are: The Guard's 10 Twitter Moments. Grab a hot cocoa, then, as it's time for you to scroll through this week's 280-character highlights from Kanye West, Iggy Azalea, AURORA, Halsey, Alessia Cara, and plenty of others.

KANYE WEST TO RELEASE A NEW ALBUM NEXT WEEK?!

I've lost count of the amount of albums that Kanye West has released this year, but apparently Ye isn't planning on slowing down any time soon, at least judging by this screenshot! Whether Yandhi is going to be an EP, LP, or something else altogether remains to be seen, but with both this and his Chance the Rapper collaborative album – which Kanye recently confirmed is titled Good Ass Job – in the pipeline, it'd appear as though Yeezy Season is only getting started this fall!

Sooo, am I the only person who's with Iggy Azalea on this one?! Don't get me wrong, I'm not the biggest fan of her music, and she's the last person who should be commenting on “lazy bars,” but for real. What's Eminem's obsession with her?! It's like he can't write a diss track without mentioning her. Keep this shit between you and Machine Gun Kelly (okay, and maybe Diddy), Em.

I j’adore how rich people buy pigs as pets

LOL! My thoughts exactly, King Princess! While most young broke couples are content with adopting a kitten from the local shelter, Ariana Grande and Pete Davidson took it one step further this week and adopted an actual fucking pig. Do they not realize that Piggy Smallz (no, really, that's literally what they've named the thing) will grow in excess of 600 pounds?! Still, that's going to make for some pretty interesting paparazzi shots around New York City!

Just letting you know I’m alive and well. I’m playing a lot of sims 4. And I’m drinking a lot of water. I dream nice dreams where I can fly and talk to animals. And I’m making music. 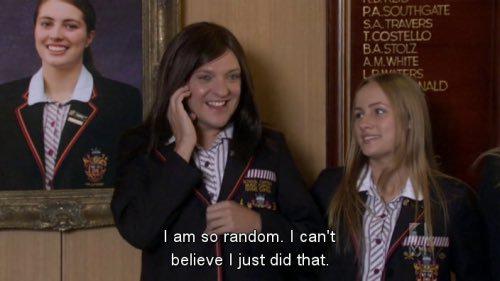 Mitski is making me feel powerful and confident

Following on from her interview and live performance on The Daily Show With Trevor Noah, Mitski continues her ascent to indie stardom this week thanks to this cosign from none other than Rivers Cuomo! Now all I need is for Mitski and Weezer to collaborate for my life to be complete! I'm serious, if the Internet was able to make that “Africa” cover happen, I can make this happen!

FINNEAS HAS SOME ADVICE

FINNEAS: King of not making shit that sounds like other shit! LOL! Seriously, though, I think this pretty much every time that I turn on the radio. Why does EVERY song sound the same?! It's so BORING! All I can say is, thank GOD that we have FINNEAS – not to mention his little sister Billie Eilish – to save us from the fiery pits of average pop music hell!

HALSEY WANTS TO BRING BACK THE BELLY BUTTON RING

Can we all mutually agree to bring back bellybutton rings.

As someone who grew up worshipping the “I'm a Slave 4 U” video, I'm SO here for the return of the belly button ring! Sure, I may've witnessed my older sister's piercing get ripped out of her navel one time, causing her to pass out on the floor beside me, but that's the price that you pay for early noughties excellence!

OMG! I love seeing my faves connecting with my faves over Twitter! And I love it even more when music results from it! Alessia Cara and Alec Benjamin are no doubt two of the most talented young songwriters in the pop game, so it goes without saying that I can't wait to hear what they both come up with when they finally get around to working with each other! No, really, my ears are SO ready to be blessed by this!

fucking spotted once again, i wish the paparazzi would respect my privacy. i'm just a regular guy like everyone else and by everyone else i mean Beyonce, Jay Z, Ellen Degeneres the Obama's pic.twitter.com/bs08530iNi

Remember when I called Scottish singer-songwriter Lewis Capaldi the funniest musician on Twitter?! Well, I meant it! Perhaps these, ahem, “paparazzi” were trying to get a sneak preview of your next single “Grace,” Lewis?! :P

Nicki Minaj is here... I should probably apologize, right?

This is the beef that I needed this 2018! That's right, although most news outlets are reporting that it was Cardi B who threw her shoe at Nicki Minaj, the REAL perpetrator was in fact the Internet Girl herself, Poppy! The big question remains, however, will Poppy finally apologize to Nicki while both are in Spain for Milan Fashion Week?! Stay tuned to find out!