Between Elon Musk quitting the Twitter board, to developers confirming they were working on an edit button, it's been a dramatic seven days on the bird app. And I haven't even mentioned Cardi B deleting her account :(. Anyways, while we begin to process what all of this means for the future of our favorite social media, it's time for the latest edition of We Are: The Guard's 10 Twitter Moments, featuring Rihanna, PinkPantheress, Lil Nas X, and more! (Edited)

And so the rollout to Rihanna's baby continues. The buildup to RiRi's first child has, quite frankly, been more iconic than any R9 album campaign I could have hoped for. Not to mention this Vogue shoot is the definition of a serve. I'm also loving the fact it doesn't appear to be Photoshopped? Normalize stretch marks and real skin texture!

if it’s one thing ima do, is laugh out! pic.twitter.com/cuagVo8Goa

this is it, my finest hour pic.twitter.com/Q6zinp1FDZ

Now you mention it, I can definitely see the similarities between twinsies PinkPantheress and Alexa Demie? PinkPantheress appearing on the Euphoria score when? On that note, I'm so freaking excited for PinkPantheress to drop the WILLOW duet "Where You Are" later this month. The TikTok girlies aren't ready for this one!

LIL NAS X GOT A BIRTHDAY WISH FROM BEYONCÉ…

Forget winning a GRAMMY or scoring a #1 hit single. It's my firm belief you haven't truly made it in the music industry until Beyoncé wishes you a happy birthday on her website. Lil Nas X has officially peaked. Oh, and while we're here, can we talk about his party on Saturday? Dude was really out here chilling with Luigi, Mario, and Sonic the Hedgehog!

LMAOOO. Bella Poarch fully poured her whole damn heart and soul out to Lil Nas X, only for him to respond with this? It's 2022. Can someone please teach this man to sync his contacts to his iCloud, already? I'm also quaking at Bella having over 200 unread text messages. I'm glad to see I'm not the only one living that messy inbox life!

At any time I felt I could do or say anything at all, and only afterward think: oh, so that’s the kind of person I am.

Me every time Phoebe Bridgers tweets anything: 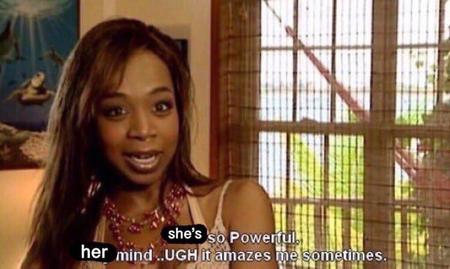 have you seen this work of art pic.twitter.com/C40VdGkaLQ

THE WEEKND REVEALED HE WAS HEADLINING COACHELLA

And, just like that, I suddenly really, really, really want to go to Coachella. Don't get me wrong, seeing Kanye West in concert is and always will be an experience, but The Weeknd and Swedish House Mafia? Now that's what I call an upgrade. Something tells me After Hours and Dawn FM are seriously going to go off in the California desert!

MARIAH CAREY ASKED MTV WHY SHE HAS NEVER WON A VMA

Yeah.. @MTV how have I offended thee? Nary an award? https://t.co/Be9g8qOZyI pic.twitter.com/7UAEJG9YgJ

Wait, what? Are you seriously telling me Mariah Carey has never won a VMA? But Mimi has so many iconic videos? The "Honey" clip alone is deserving of the Vanguard Award. And don't even get me started on "Fantasy?" "Obsessed?" "Heartbreaker?" I could go on? Forget the VMAs, Mariah deserves her own personal award ceremony!

i’ll never forget saying she doesn’t have enough iconic videos … like vision of love, emotions, fantasy, ABMB, honey, butterfly, the roof, my all, heartbreaker, loverboy, IKWYW, literally everything from TEOM era, touch my body, obsessed, and up out my face don’t exist … https://t.co/xYujnR8xVq

HALLE BAILEY WAS FEELING THE LOVE FROM DDG

being in love is so dang fun

OMG. Halle Bailey really is in love love, huh? This is genuinely the cutest thing I've ever seen. Halle is a literal and figurative princess, and I'm honestly so glad to see her boyfriend, the YouTube rapper DDG, treating her like the royalty she is. Now can we find someone for Chloe, too? *Sings* "Treat me like I treat me!"

Chloe and Halle are the cutest pic.twitter.com/z2nvPurvMZ

SZA HAD THE HAPPIEST TIME AT THE GRAMMY AWARDS

I jus like when I look happy and Im really happy at the same time . God is good pic.twitter.com/6PTr07ufoY

It's been over a week since the GRAMMYs aired, but I'm honestly still not over SZA glowing like an absolute goddess, even with her broken ankle. And while it's sad to hear the Recording Academy didn't actually invite her to perform, here's hoping it won't be long until Solána drops the album and gets to do her thing on the GRAMMY stage!

This wasn’t a complaint ! It was a response to the false narrative I backed out of performing ! i ain’t even got no album out !

CHARLI XCX AND HER BOOBS BOPPED TO LAS KETCHUP

why are my boobs always acting up like this ? https://t.co/BQFG36nyo1

LOLLL. Charli XCX's boobs are basically a Twitter meme in their own right at this point, aren't they? I'd also like to take this moment to thank Charli for reminding me what an absolute bop "Aserejé" by Las Ketchup is. Speaking of bops, I'm so ready for the "Used to Know Me" video on Friday. Charli's Blondie Era is about to be iconic!

who even am i? used to know me video incoming… pic.twitter.com/86PPKfXImL