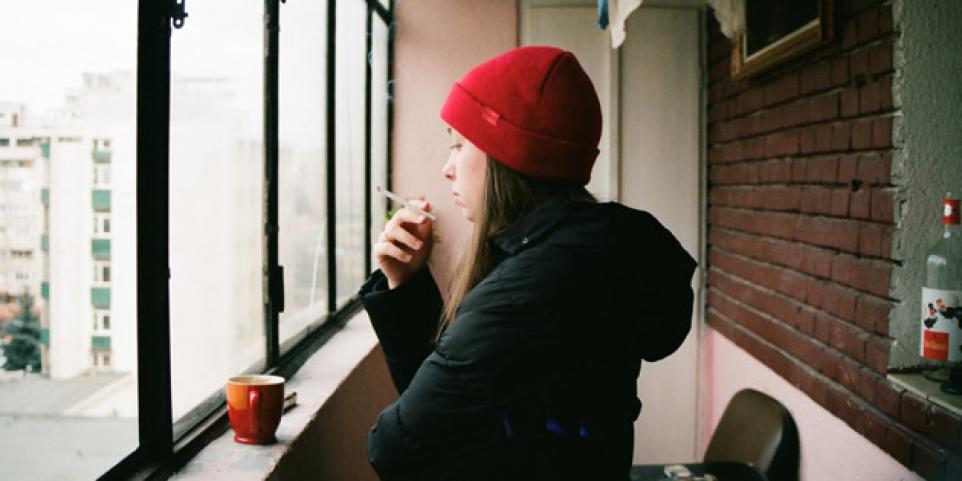 Coronavirus is scaring the sh*t out of everyone right now, and it'd appear not even our little music community is safe. SXSW is officially canceled, and rumors are swirling Coachella is up next. Basically, it's looking like we're going to be spending the next couple of months hunkered down inside of our TP forts, so if you're searching for some sick tunes (sorry) to distract yourself during this time, look no further than the latest edition of We Are: The Guard's Best Indie Songs. Just don't forget to thoroughly wash your hands before clicking play on the following 10 indie tracks from HAIM, The National, Phantogram, and more.

HAIM have officially reached that point in their career where they're just putting out consistent musical gold, haven't they? Following on from the release of “Hallelujah,” the  sisters return today with “The Steps” – a distorted country banger about thriving in the face of toxic people that's almost as badass as Danielle Haim beating the drums with no bra on.

I'm not sure about you, but I'm absolutely loving this Whethan era. Having recently joined forces with We Are: The Guard favorite grandson for the insane “All in My Head,” the Chicago producer continues to layer on the indie-rock vibes alongside his high-energy  beats on “Upside Down” – a bouncy bop that's bound to get festival crowds beyond hyped.

Overcoats sounded ready for war on their previous singles “The Fool” and “Fire & Fury,” but the NYC folk duo are finally shedding their armor on “New Shoes.” Featured on their recent album The Fight, it's a bare-bones ballad about vulnerability and self-worth, with birdsong and fingerpicked acoustics backing Hana Elion and JJ Mitchell's exquisite vocals.

There isn't a whole lot of information out there on Cheap Synths, but it really doesn't matter. “B Cool Janet” tells you everything you need to know about these groovy NYC robots. A little LCD Soundsystem, a little Hot Chip, and a little something else of their own mad scientific creation, Cheap Synths will no doubt dominate a dance floor near you soon.

Having reminded us girls can be fuckboys too on her recent single “Fuckboy,” BAUM continues to flip the script on this acoustic version. While the original showcased a bravado that earned it a place in many a Spotify playlist, the young singer is revealing the vulnerability behind the facade on this cut, with BAUM's glassy vox sitting front and center.

A year on from the release I Am Easy to Find, The National return today with a take on “Never Tear Us Apart” by INXS. Listen as Matt Berninger and company – who recorded the cover as part of Songs for Australia – breathe a signature air of blue melancholy into the Kick cut, with programmed drums replacing the synth strings for a reinvention like no other.

Phantogram are striving for transcendence on “Dear God.” The latest single to be unveiled from Ceremony hears Sarah Barthel having an impassioned conversation with a higher power of sorts, with the frontwoman begging for a spiritual awakening over a piano-laced production that merges hip-hop flourishes with “Bennie and the Jets”-esque soul and jaunt.

LOUIS THE CHILD & FOSTER THE PEOPLE – EVERY COLOR

Louis the Child and Foster the People? Name a more ambitious crossover event. Jokes aside, the dance act and indie outfit make for quite the team on “Every Color” – a vivid, vibrant bop about a love that transcends all of time and space. “It's amazing to get to work with an artist you admire and learn from them in the process,” write Louis the Child. Listen.

THE MARÍAS – HOLD IT TOGETHER

The Marías expertly blend sensuality and anxiety on their latest single “Hold It Together.” Written by María Zardoya during a period of non-stop touring when she felt unable to spend any time with her boyfriend and Marías bandmate Josh Conway, “Hold It Together” is a luxuriously velvet groover as shot through with a dose of frayed, fizzing nerve endings.

Following on from the release of their JPEGMAFIA and Code Orange collaboration “HPNGC,” Tempe rap trio Injury Reserve return today with another loosie in the form of “Hoodwinked.” Built around menacing low-end throbs and a shrill, skronking saxophone motif courtesy of Simeon May, “Hoodwinked” is an eerie beast of a listen that totally bangs.

Don't forget to follow We Are: The Guard's Weekly Chart for more! x

Photo by Catalin-Andrei Moldovan on Unsplash