We’re very lucky, you know? You and I. The fact that we get to sit on computers or phones or Apple watches every day and just have amazing music served to us on a platter is a pleasure that I absolutely don’t take for granted. Not because I’m any good at it, but because we’re inundated with so much amazing talent every single day that it makes my job easy. That I get sent songs from artists that are so game-changingly fantastic that I want shout about them from rooftops like at the end of that movie Network. “I’m mad as hell about how good this song is, and I’m not gonna take it anymore.”

Harrison Brome is your new soul-slanging bae. Simple as that. There’s really nothing more to say, except for all the other things there are to say. He’s got the kind of confident croon that’ll band people across the globe together, form factions of people called Brome-heads who will have to, one day in the near future, pay hundreds of dollars to see him perform these songs, stripped down and solo, emotionally raw, with nothing to support him but the DJ just-so-slightly off stage and a brooding, intense light show set to match the music. Go ahead, listen to three amazing tracks and judge for yourself, but we both already know that Harrison Brome is about to be your new favorite artist. It’s inevitable.

What’s up with this new Weeknd song that isn’t even on the radio yet? Ha Ha, not so fast. We talking Harrison Brome baby, not Abel Tesfaye. Get it right. Brome owns this soul-shatteringly sexy R&B hook like he’s already got hits galore on the radio. But the truth is, he doesn’t have hits yet. Just songs that are destined to be.

I mean Body High is so good that Brome already has branded t-shirts for sale. 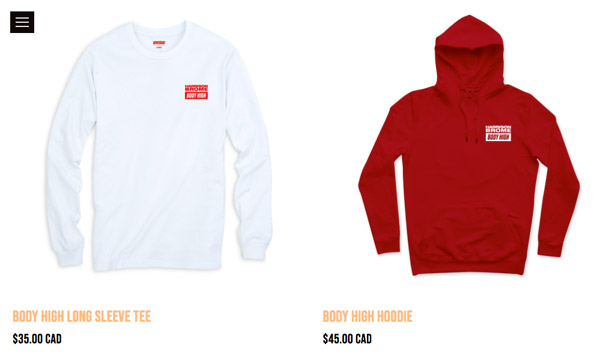 How many other songs do you know of that can claim that? I bet none. Okay, well max— seven. But either way, this song is deserving of the swag. I mean look at that red hoodie, don’t you just want to be the coolest dude in dudetown (or chick into chicktown), sliding into DMs like you’re Harrison Brome yourself. “Damn, he/she fine,” they’ll all say, not exactly sure why. Then you walk around with this song playing in the background and it’s like that scene in movies where characters fall in love at first sight. Like “There She Goes” from She’s All That. It is Valentine’s Day after-all, might as well buy this for yourself for some guaranteed pick-up action. Tell me this isn’t great enough to drop $45.00 CAS on that sucker? You can’t, can you!? Alright pay up.

Boy is a bonus track from Harrison Brome’s six song EP, Fill Your Brains, from way back in 2016. That’s like forever ago. And he was making tracks this hot back then? Come on, where were you on this? I can’t discover everything on my own. I blame you for not bringing this to my attention. Well, no harm, no foul. 'Cause at least we get to listen to it now. It’s more lo-fi than his new tracks, but that’s what happens when you build steam— better producers and mixers and masterers want to work with you— and then voila! your music starts sounding better.

Curated by Kkellner. I don’t know if that’s their first initial and their last name, but I hope it is, because it would be a lot like my name, Kkroeber. IF THIS ISN’T HAPPENSTANCE, I DONT KNOW WHAT IS.