FEATURED FIND: DUBLIN’S Æ MAK IS THE GOLDEN AGE OF ELECTROPOP WE'VE BEEN WISHING FOR

Cerebral, physical, conceptual, poppy, Dublin's Æ Mak truly could be all things for all people.

The twin helixes of Pop and Electronic music have been weaving ever tighter in the last 10 years. A proliferation of hands-on electronic instruments has allowed musicians and performers to plug in and put their fingers directly on the oscillators and the motherboards, creating a whole new cybernetic pop hybrid that would make Kraftwerk very proud and vindicated indeed. This means electronic music is no longer under the sole purview of lab rats and bedroom hermeticists. These previous limitations perhaps sample selected for a certain type of personality for which an 11-minute minimal techno trance out with very little variation is entirely reasonable, accessible even.

There is something to be said for the refinement that comes by introducing an element of Pop, creating lean, efficient, polished works of art. Electronic music and Pop have done this dance since circuits start singing. We might not even have dance music as we know it today without Pop, as breakout singles like Donna Summer's "I Feel Love" exported the futuristic utopian disco productions of Giorgio Moroder to the wider world.

These waves have been drawing closer and closer together for at least the entirety of the 21st Century. They may have found their equilibrium with Dublin's Æ Mak.

Æ Mak has been plying her unique electronic art pop since 2017 and has been turning heads very nearly from the start. Æ Mak began as a two piece, when Ellie McMahon and Aoife McCann met at BIMM Dublin where both were studying vocals.

Æ Mak may be sharp, tight, polished, and accessible but she is also strange (in the best way). This genuine sense of quirkiness and solid conceptualism is rare in the Pop sphere, save for certain special moments in Pop history like Kate Bush's stunningly surreal ascent or Bjork's post-Sugarcubes artfulness. Please, please, please let this be the beginning of something new and wonderful! Let this be the Golden Age of Electronic Pop we've been wishing for for a century!

Virtually all of Æ Mak's singles have met with glowing critical acclaim, from the nearly operatic bounce of "Glow" to the glowing light tropicalia of "We Have It Right Here." She recently released the stunningly stripped-down "New Friend," with an appropriately bizarre music video. And while sugary vocals over a frenetic drum machine isn't a brand new concept - Yaeji got famous following a similar template not too long ago - but it's no less thrilling for that.

The most thrilling thing about Æ Mak is that she’s just doing her own thing. Her synthetic pop seems more influenced by bizarre dreams or interpretive dance sequences than trying to fit into some scene.

Make sure not to miss her excellent Class Exercises release and read on for We Are: The Guard's interview with Dublin's Æ Mak!

WE ARE: THE GUARD: Hey there! Thanks so much for chatting with us. What's on the horizon for the rest of 2021?

Æ MAK: HI! TUNES, making loads of tunes, am moving to Berlin for the summer for a change of scenery. I started producing last year, so this year I'm exploring and honing that and working on an album. Will be releasing a couple different projects throughout the year - excited - and excited to perform again.

WE ARE: THE GUARD: We love your song "New Friend!" Can you let us in on the creative process of writing and recording that one, and tell us about the music video?

Æ MAK: Thank you! I made it in my bedroom! Made the beat first. I was scrolling through Insta stories (ugh), and Collective Dublin, a film production company, were bombing around the ring of Kerry in Ireland, shoulders arched bopping to “GOSH” by Jamie XX, I was like, I wanna make a manic drive beat like that. The dissonant LA'S buzzed next and then I made the vocal over it. The only organic sounds are the rain outside and my voice - every other sound I made in Ableton operator and with presets. It's about a new relationship with a woman and not being able to commit to it fully because you're not ready to label your sexuality, so I wanted the music to feel like a dark sexy dreamscape- a soundtrack to a night out with your "new friend" - that you can escape into and explore yourself in, unafraid, with devilish unapologetic energy.

The VIDEO <3 I love it. Annnd, I made it with Collective Dublin - full circle, 360! I told Mark, the director about the car bopping inspo and the story behind the song and the feeling of the EP overall - an ode to the lost dreamer house parties of 2020, and he created this carnivalesque world. The video was born out of the ridiculousness of having to declare your sexuality. The clown representing this.

"The role of the clown in our society has since the beginning of time has been one of power. The jester is the only one who can pull the card which causes the king's house to fall, nobody else can question authority in such a way. Humour is power" - Mark

Fucking yes, like. It was such a buzz shooting it as well, felt like I was in a Tarantino movie. Quarantino.

WATG: When did you get started in music, and is it what you always thought you'd do?

Æ MAK: I started taking it seriously about 5 years ago now and knew a life as a songwriter and performer is the life I wanted. I always sang and performed in theatre shows growing up and took piano lessons, but I didn't start writing until I was about 20. Always thought I'd be on the West End, acting out parts, but creating your own part and writing the show is way better.

WATG: Do you have any advice for aspiring producers?

Æ MAK: Just dive in. I used to think it was a dark, magical mystery before biting the bullet last May in lockdown. Never thought it was my role to record and produce my own songs, or that I'd have the capability, but the laptop (Ableton / Logic / whichever DAW) is just another tool to create and write and develop your own world of sound as an artist. I heavily relied on collaborations with producers - all male all the time - to execute my ideas, but sweet lord bb jeb the freedom I have now. So yeah, buy all the basics and dive head first! Learn by doing and creating along the way. You don't have to be a big tech head or a swanky ass producer - I bought my first plugin last month... haha. You can make whatever the hell you want in whatever way you want with very little. I did a month long Ableton production course with She Knows Tech last summer as well - they're fantastic.

WATG: Who's an underrated artist we need to know about?

WATG: To end with a fun one- In a zombie apocalypse what would be your weapon of choice?

Class Exercises is available on all streaming platforms! 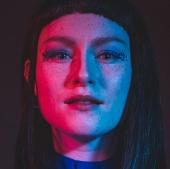