In the age of Metaverse and TikTok, there’s a massive oversaturation of content and music that we’re constantly being exposed to – good and bad. Amongst the throng of wannabe influencers and overnight-success-hopefuls, it can be hard to find the ones that really stand out, and who really have something meaningful to say. But that’s where up-and-coming artist Aimee Vant comes in – an alt-pop singer-songwriter who not only has the talent to boot, but the dedication and hard work to back it up.

Double majoring as a Songwriting and Contemporary Writing & Production major at Berklee (from where she graduated in 2021), Vant began her artist journey with the release of “Orange Juice” in 2020. A stunning ballad with moving lyrics, “Orange Juice” reflects on the meaning of self-care and the times when it’s hard to do that for yourself. This single was the first release from her debut album Everything Sucks!! (2020), a heart-wrenching project that explores young adulthood and the trials and tribulations that come with it. Within this album, you’ll also hear tracks such as “Dear Anxiety”, an open letter to that dreadful feeling we all know and hate; “Carole,” a piano-backed, touching ode to her mother; and “Gnight,” a powerful message on protecting the inner child in us, even as we grow up.

Since the release of her debut album, Vant’s continued to dazzle us with a string of singles that are not only individually poignant and showcase her incredible songwriting, but that show a fascinating diversity in her artistry. “Teeth” is a delicately cinematic track about a scarring relationship that’s beautifully backed by the Budapest Art Orchestra, while “Chocolate & Cigarettes,” a collaboration with producer Tigri, is a funky, playful tease towards a crush.

2021 was filled with glittery dream-pop-like singles that stick in the head like glue. “11:11” is a synth-filled, LANY-reminiscent (~personal favorite~) tune about wishing for a lost love to rekindle: “I still wish for us/It’s 11:11, the clocks are all stuck/I blow the candles out for us”, while “6.0” – the title being a reference to California’s infamous earthquakes – is a glittery track that Vant herself served as a lead producer on. And “xyz” is sweet and buzzy, describing that moment when you can’t find the words to describe how you feel about someone.

Her most recent release, “Airbnb,” is one of her most brilliant yet. Vant’s delicate ability to take extremely human experiences and translate them into her music is beautifully shown in this song as she talks about experiencing – and choosing to overcome – a speed-bump in a relationship.

We were lucky enough to be able to chat with Aimee Vant about “Airbnb”, and what projects she has in store for 2022 (she’s just begun teasing a new single y’all…)!

WE ARE: THE GUARD: Hey Aimee! So excited to have you here!! First off, we're absolutely obsessed with your latest single, “Airbnb". Can you tell us a bit more about the process of writing/creating it?

AIMEE VANT: I wrote “Airbnb” with my friends James McKernan and Travis Heidelman and we wanted to challenge ourselves a little with the concept. I came into the session with just the title and we decided on the conceptual direction together. We brought up that most pop music reflects an unrealistic/unhealthy image of love where there’s a constant cycle of instability, jealousy, and fiery disagreements. We wanted to make a more realistic love song that instead, romanticized what a healthy relationship looks like. “Airbnb” is about the rough patches that require patience and choice in a long-term relationship. We wanted to portray that imperfection is natural in a relationship, and that the realest form of romance is communicating and working through those imperfections in a healthy way.

WE ARE: THE GUARD: I know you studied Contemporary Writing and Production and Songwriting at Berklee, which is super dope! I’d love to hear more about how you’ve been involved in the production process of your music.

AIMEE VANT: I’ve been honing my production skills for a few years now and I've gotten to the point where I almost always start producing and arranging as I write. Lately, I tend to flesh out a good amount of each song by myself primarily, then co-produce the rest of it. “Airbnb” was a different case, since James, Travis, and I wrote in the room together, and both of them are also really talented producers. They both did an incredible job on production and were very open to ideas I had as well.

WATG: How do you feel you’ve grown as an artist since you first started creating music?

AV: When I first started writing, my imposter syndrome was at an all-time high. I didn’t write my first song until I was 18, so I was very self-conscious, especially in comparison to other writers my age. I think gaining confidence over the years has allowed me to take risks in my writing. My favorite songs have been ones that feel out of my comfort zone lyrically and conceptually, where I hear myself breaking former creative barriers. I also have been learning to produce over the years and that has completely expanded my writing process. It’s allowed me to have a much wider creative vision that contributes to a more exciting song as a whole.

WATG: We’d love to know what artists and music you’re currently listening to! Spill a bit of your current playlist?

WATG: What advice do you have for other independent artists who are working towards their dreams?

AV: I think it’s important to give yourself time to grow as an artist. Social media can really convince you that you’re either viral at 16 or it’s hopeless, when that is far from realistic. In music particularly, there aren’t really shortcuts, and that’s okay. In a lot of aspects, you have to put the years in and be gentle with yourself until you feel settled in your unique sound. It doesn’t have to be an instantly gratifying process, and it honestly shouldn’t be if you’re exploring the depths of your creativity as much as you really can be. You should always be striving to learn more avenues of creating music, and you have to be kind to yourself in giving that its due time. I like to think that recognition and income come naturally once you fully invest yourself in the continuous creative process.

WATG: What can our readers look forward to from you in 2022??

AV: I have several of my favorite songs ever coming out this year. I’ve taken the time through the pandemic to really focus on my production, writing and composition skills, and I think they shine more than ever in these upcoming releases. One of the sooner releases includes a live string arrangement written by myself and Noah Hubbell on a song called “Small Talk”. Since I’m an independent artist, I look forward to the ability to be flexible in experimenting and collaborating as I go.

WATG: Last but certainly not least… spill a guilty pleasure.

AV: I didn’t think I would, but I love going to Disneyland… am I a Disney adult??? Idk please don’t tell though.

Go check out “Airbnb” on all streaming platforms (you WON’T regret it), and follow Aimee’s socials to stay up-to-date on all new projects, including her upcoming single “SAFEWORD” that’s coming out soon!!

Natalie Kroh is a recent Berklee College of Music graduate born, raised, and currently residing in LA. She’s an artist herself who creates music within the contemporary R&B space, but also loves discovering and listening to artists from various genres. In her free time, you’d find her making music, reading, watching movies, or exploring the city with friends. 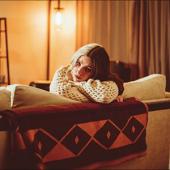